Having bought a new tripod, I needed something to put on top of it.

For years now I’ve mostly been using ball and socket heads, and for one simple reason – portability. As much of my photography is focused on landscapes, I wanted something that was reasonably light and compact and could be readily hauled around, usually on the back of a backpack.

I’ll be discussing tripod heads in more detail in a future post, so for now I’ll just say that when choosing a head for my new MT055CXPRO3 I decided to move away from ball & socket. And this was prompted by my discovery of the Manfrotto X-Pro three-way head (MHXPRO-3W). 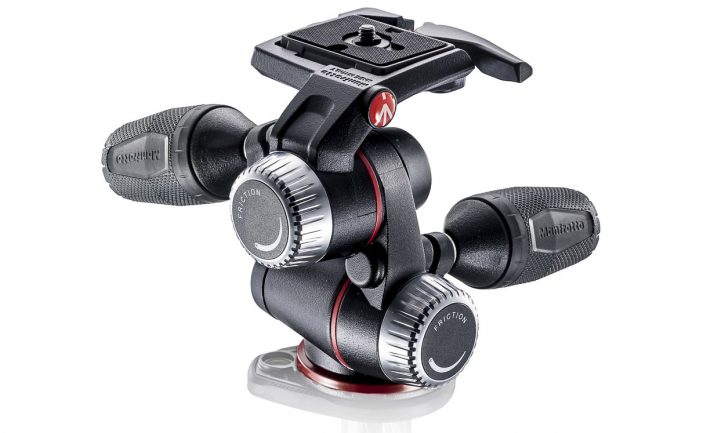 With the 055 tripod, I’d already compromised somewhat on weight and size. This tripod is not my general-purpose, carry everywhere set of legs – my existing MT190CXPRO4 will continue to serve that purpose. I bought the 055 tripod for its extra stability in full knowledge that it would be luggable rather than portable.

That meant I was prepared to accept a little extra weight with the head, too. But I still didn’t want something that was too bulky.

My biggest beef with ball heads is that, when you loosen the lock, the camera tends to head off in unpredictable directions. Fine-tuning a composition is tricky because you’re having to adjust all three axes at once. And when you finally tighten up, you inevitably find that one of the settings is just a little wrong. So you unlock and… everything gets screwed up in every direction again.

With a three-way head, you adjust one axis at a time. It’s so much easier to stay in control.

The problem with pan & tilt heads, though, is that the levers typically used for the forward and sideways tilt actions stick out a lot. Yes, you can angle them downwards to minimise this, but that adds an extra task to the beginning and end of each set-up. 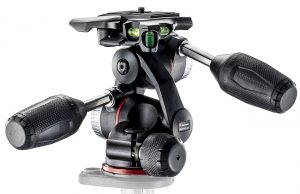 Then I hit on the Manfrotto X-Pro, which seems to me an excellent compromise between functionality and size.

Panning is conventional, with a knob to lock the motion just above the base of the head. The panning action is very smooth and the knob is chunky enough to be easily usable even with gloves.

The forward and sideways tilt axes use levers – as it normal. What’s unusual is that these are telescopic. When not in use, they push inwards, considerably reducing the space taken up by the head. 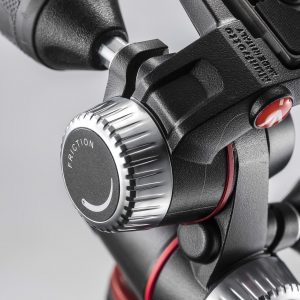 The longer the handle the finer the control you have over adjustments. (And again, this may be more significant to you if you’re using this to shoot video, as longer handles make for smoother movements.) But for me, there’s enough leverage to stay in control of a D800 fitted with a heavy lens. And it’s definitely a huge improvement over trying to use a ball head. If you use a really heavy lens (and don’t mount the lens to the tripod, rather than the camera), then you’ll find yourself holding both lever and lens to adjust the forward tilt.

Both levers lock in the convention way – by twisting the grip. Just a short twist is needed, so getting your composition exactly right is a cinch, even for someone as picky as me.

And both have variable resistance, set via large silver knobs that have a clicky action. This is a great feature because it means that a heavy camera setup doesn’t suddenly drop sideways or forward as soon as you release the lock. It can also help smooth movements when shooting video, although it’s nothing like as good as using a proper fluid head. 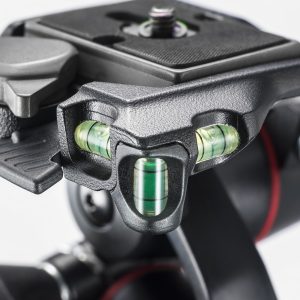 There are three spirit levels built in, one for each axis. I very rarely use these, but I know some people find them essential. All three levels are in the same place, which makes it quick and easy to set up the tripod for, for example, panoramic shots.

The head is fitted with the standard Manfrotto RC-2 quick release mount and 200PL plate. I have this fitting on my monopod and both tripods and have the corresponding plates fitted to all my main cameras and even my Zoom audio recorder. On the cameras, I’ve fitted the special screw and D-ring to make the plates compatible with Black Rapid straps. So, not only is getting kit on and off the tripods a snap, it’s also very easy to switch between strap and tripod – and back again.

The latch and release mechanisms on this head are different to those on the two ball & socket heads I have and the 234RC tilt head I have on my monopod. On the other devices, to release you pull the main lever, which moves half-way. Then you have to pull on a small, secondary lever to release all the way. On this head, the secondary lever is replaced by a pressure plate. It’s still the same two-step action, which prevents accidental release. But it’s a more natural movement. And the secondary lever on one of my ball & socket heads is showing signs of sticking. The mechanism on the X-Pro feels more robust.

There is one thing I think is lacking. Although there’s a scale marked in degrees for the panning movement, the two tilt mechanisms don’t have anything similar. The #229 head I use with my medium format gear has inclination/declination scales for both tilt axes and I always find that useful. It allows me to set the head to a ‘neutral’ position before any session. Mind you, the 229 is huge and has plenty of space for that sort of thing. Nonetheless, I feel Manfrotto could at least have marked a ‘zero’ position on the tilt axes.

Aside from that, it’s hard to find fault with the X-Pro. Bolted on top of the 055 legs the thing is rock-steady when holding a Nikon D800 and 24-70mm. At 1kg, it’s heavier than I would want for long hikes, but it fits readily into the ‘portable’ category. And those telescopic arms mean you’re not constantly snagging on things when hauling the tripod out of the car.

Most importantly, it provides all the stability and control I need for landscape work in a relatively compact package.