Today is the 178th birthday of photography. Give or take.

On 19 August 1839, scientist and politician François Arago made an announcement to a joint meeting of the Académie des Sciences and the Académie des Bueaux Arts at the Institut de France. It concerned a process recently bought by the state from showman Louis Jacques Mandé Daguerre and inevitably dubbed the Daguerrotype (or Daguerrotypie in French).

This was the first official recognition of the invention of photography, and it created a sensation, even prompting painter Paul Delaroche to declare: “From today painting is dead.”

To be fair, William Henry Fox Talbot, inventor of the ‘Photogenic Drawing’, which would soon transform into the Calotype or Talbotype, published a paper in January 1839 detailing his own photographic process. As Talbot’s invention was a negative/positive process it has a better claim to be the progenitor of photography. But it was the direct-to-positive Daguerrotype that stormed the world.

In part, this was because the French state, with quite remarkable foresight, had bought the Daguerrotype process from Daguerre in order to make it freely available to everyone, without the hindrance of patents (except in England and Wales). The politicians rightly predicted that this would encourage the creation of a whole new industry, with France playing a major role (although the US would arguably embrace the Daguerrotype with even greater vigour).

There were others who had been working on photographic processes too, but history tends to favour simple stories when it comes to inventions. (Don’t get me started on who invented the aeroplane.) For example, the famous astronomer Sir John Herschel played an important role, even giving us the term ‘photography’ as well as the use of ‘positive’, ‘negative’ and ‘snap shot’ in the photographic context.

And, of course, few inventions are born from a single moment. You can trace photography’s lineage to Aristotle, who first noted the image-forming effects of a small aperture (such as a gap between leaves). This idea was further explored by Islamic scholar Alhazen in a book on optics that later inspired the likes of Roger Bacon. The camera obscura (dark room) was further refined in the 17th Century, and by the early 18th Century had become a portable device that served as a drawing aid. Also in the early 18th Century, scientists started to pay attention to how silver salts darkened in sunlight. 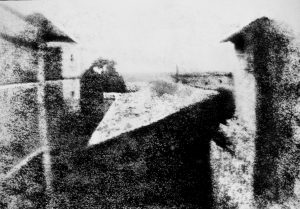 View of the courtyard by Nicéphore Niépce

The first true photograph is credited to Nicéphore Niépce who captured a view of the courtyard and buildings at his country estate near Châlon-sur-Saône in 1826. It was an eight-hour exposure. So you could date the invention of photography to then. But, of course, Niépce had been experimenting with the process (which involved light hardening bitumen on pewter plates) for several years by then. (In 1829, Daguerre went into partnership with Niépce. But the latter did not live to see the official pronouncement of photography 10 years later.)

It might be better to say that photography was discovered more than invented. And like most inventions, photography was a process, continuously building on previous knowledge and discoveries. But if you want a birthday, 1839 – the year that the world at large learned of the process of both Daguerre and Fox Talbot – will serve. 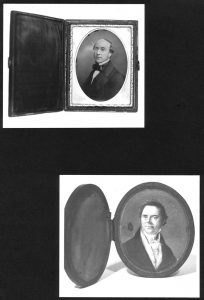 A page from my A-level ‘personal study’ showing a Daguerrotype (top) and a miniature portrait painting. In the credits I thank Mrs A West for the load of these pictures from her ‘personal collection’. Sounds fancy, but she was actually the mother of my friend Caroline.

I have my own fond memory of the early days of photography.

No, I’m not that old. But back in the mid-1970s I was studying for my art A-level, for which I had to produce a short dissertation. I chose Victorian photography as my subject.

My father decided we should take a trip down to the Science Museum in London to give me a chance to look at some old photographs. When we arrived, he spoke to someone at the reception desk – and then the adventure began.

A curator – whose name I don’t know, but to whom I will be forever grateful – took me to a room containing a large number of plans chests. We opened drawer after drawer, each one containing dozens of Daguerrotypes, tintypes and glass negatives (wet and dry collodion, albumen etc).

The Daguerrotype has to be experienced first-hand to fully appreciate it. Most were made on silver-plated copper sheets. The highlights (ie, whites) in the image are provided by the photographic emulsion. Where the image is dark is where the emulsion has been removed, leaving the silvered surface. This would often be chemically tarnished to darken it, or you might just wait for nature to take its course, because silver tends to tarnish if left to its own devices.

In many cases, though, this remained silvery, and therefore very reflective. Viewing these images correctly means getting the polished surface to reflect something dark – often not a problem in Victorian times when black was a popular colour for clothes. These were the images I preferred – they had a tentative, elusive quality, almost ghostly, in that I felt I had to somehow catch an image that was trying to escape. 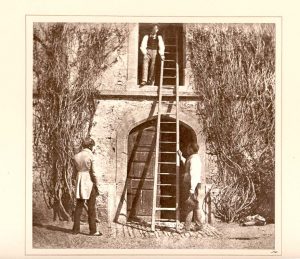 ‘The Ladder’, from Pencil of Nature. But is it art?

But then came the real treat. We retired to a small, windowless room with special lighting. I was asked to put on cotton gloves and was then handed a copy of The Pencil of Nature by Fox Talbot.

Published in instalments between 1844 and 1846, this was the first book to contain photographs. They were pasted in individually, by hand. Up to then – and for some time after, photographs would appear in books, magazines and newspapers only by being copied by engravers.

At the time, I remember being disappointed by how mundane the pictures were, artistically speaking. But I was struck by the delicacy and fragility of the images.

I couldn’t linger over them because I was allowed to view each page only for a brief time. But it was an experience I’ll never forget.