Will photographers be replaced by robots one day? It’s not as fanciful as you might think. In fact, it has already happened in some small ways.Does anyone go to a photographer to get passport pictures taken? No. You step inside a box and feed coins into a slot.

If that doesn’t seem significant, think about the functionality built into cameras these days. There’s face recognition, vibration reduction and highly sophisticated automatic exposure, with fill-in flash if necessary.

The quality of the images produced by modern digital cameras is such that it has partly de-skilled the job of the photographer. At one time, you needed to hire a professional for any important job in order to ensure that the photograph ‘came out’. You needed that technical expertise and that’s why people paid photographers the big bucks <sarcastic laugh>. Today, the camera sees to much of that.

If we look back through history we can see previous waves of mechanism where machines (and it’s not too much of a stretch to call them robots) have replaced people. Farming was the first area to see major mechanisation. And then the industrial revolution saw many manufacturing jobs being taken up by machines. This led to short-term hardship and unemployment. But in the long term we can see that the machines mostly took jobs that people didn’t really want to do. And the people themselves moved to other forms of employment, often with higher skills and better pay.

Artificial intelligence (AI), mostly in the shape of machine learning, is creeping into many areas of life these days. Those previous waves of automation mostly displaced people in unskilled jobs. But now, jobs such as radiologist and insurance claims adjuster are falling to the machines. There’s a powerful and terrifying book that explains this – The Rise of the Robots by Martin Ford.

Still, you’d think that creativity will forever remain the preserve of human kind. Well, don’t be so sure.

Google is an AI company. You might think of it as a search engine, and its shareholders probably think of it as a highly lucrative advertising business, but its products are all AI-based, one way or another. And Google recently carried out an interesting experiment with its Street View images. 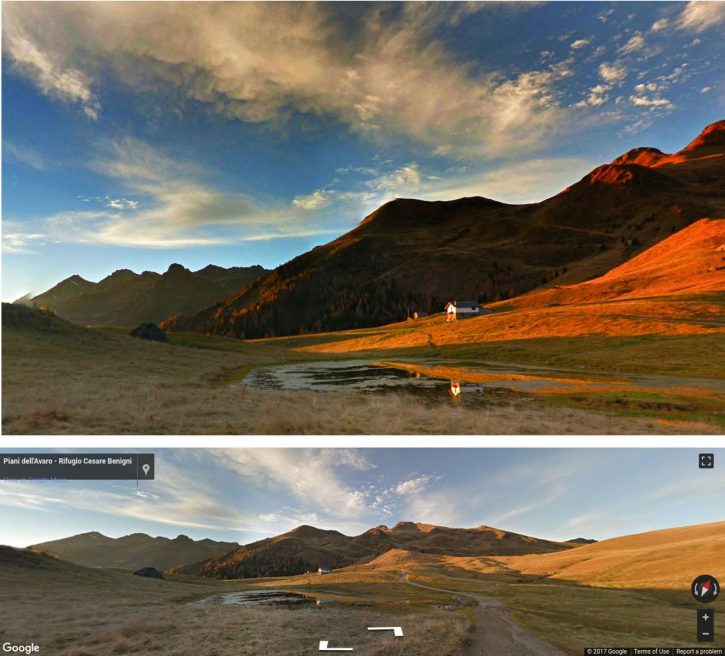 The lower image is the one captured by Street View (obviously ‘street’ is a bit of a misnomer here). The top image is a modified version after Google let loose an AI algorithm. This AI is designed to make the kinds of choices a professional photographer would make, particularly in terms of composition, framing and post-production image manipulation (saturation, contrast etc).

Google has a lot more information and images here. Some of the pictures are pretty good.

Now this doesn’t render us landscape photographers obsolete. For one thing, the system, appears to be working with pre-existing images which it then improves. And one of the key skills of a photographer is ‘seeing’ the image – knowing that what’s in front of you will make a worthwhile image and deciding that now is the time to capture it. An existing image represents a whole raft of decisions that have already been made.

Nonetheless, there is something disturbing about this – as though another bit of our humanity has been chipped away. As humans we like to think we’re special, but maybe we’re the machines.