A while back I wrote about how it all started for me. And I said that the first proper camera I owned was the Canon FTb. Which is true.

But I also noted that the first camera I used to take serious pictures was the Halina 35X.

Now, nostalgia and eBay is a dangerous combination. That’s how I wound up the proud owner of … a Halina 35X. And boy it brings back memories. 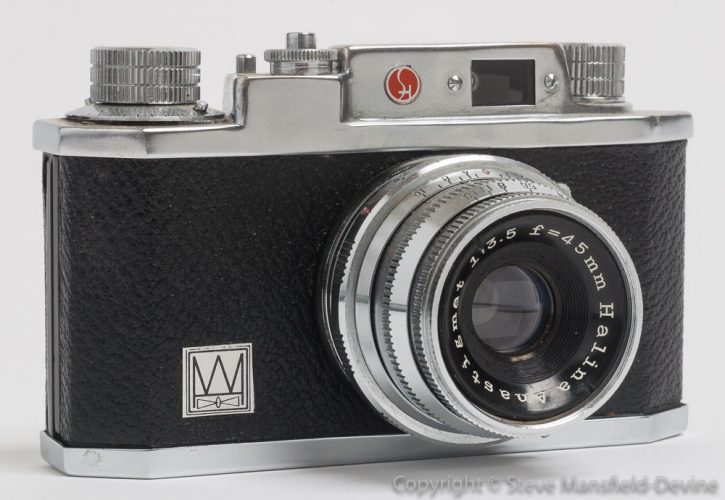 A few surprises, too. It’s slightly smaller than I remember. The picture is perhaps a little misleading. The body size isn’t much bigger than an iPhone 5, though obviously somewhat thicker.

It’s heavy. Everything is made of metal. You could probably run a car over this thing and it would barely notice.

But that’s where most of the positives end. This was always a low-end camera. The small red pastille near the viewfinder is a bit cheeky. It’s mimicking the famous Leica badge, but this camera is in an altogether different league. A much, much lower league.

There’s nothing advanced or sophisticated on this camera. When you load film, the entire back and bottom detaches. There’s no pressure plate to keep the film properly flat. And you have to remember to reset the frame counter – a ring around the film wind knob – manually.

Winding the film doesn’t cock the shutter – there’s a lever on the side of the lens for that (it’s a leaf shutter). Similarly, there’s no interlocking so it’s easy to cock the shutter and shoot another image without winding on the film. Multiple exposures are therefore very simple to do with this camera. That’s great if that’s your intention. Generally, it’s not.

Focusing is achieved by guessing the distance to the subject and setting it on the lens. This is a camera where stopping down and using the hyperfocal distance will help cover a lot of mistakes.

Finally, the viewfinder is tiny. It’s like peering through a keyhole. And the frame you see has only a tangential relationship to what will actually appear on the film.

And yet my dad got a lot of very good photographs with this camera (or one very like it). And I did too, before upgrading (if that’s the word) to a Zenit B.

There were disappointments too, of course. I remember shooting some pictures of the model tanks I’d built (yes, I was that age), set in a ‘diorama’ of sand and pebbles meant to resemble the Libyan desert. It was something I’d seen done in Airfix magazine. I reckoned I’d try it for myself with my freshly painted Crusader and Churchill tanks and get my own article published in the magazine.

The minimum focusing distance on the lens said 3ft, but the tanks looked tiny at that range. So I tried closing in. A few days later I ran excitedly to the chemist to get my black & white prints back. As I walked home, riffling through the pictures, my heart sank lower and lower. Shot after shot was either blurred (a combination of camera shake and being too close) or showed an almost unrecognisably small blob in the middle of a picture of … well, sand and pebbles.

As a journalist, my articles and photographs have appeared in a large number of publications. But never, sadly, Airfix magazine.

But it did remind me of the thrill of getting back your prints or transparencies and discovering that the images – at least some of them – are as good as you’d hoped. Sometimes even better. In an age of instant, digital satisfaction we’ve somehow lost that particular source of satisfaction.