Sometimes, when you’re looking for one thing you find another.

This was quite a magical day. We were at La Pointe de la Torche, a small headland poking out into the sea at the southern end of the Plage de Tronoan in Finistère, Brittany. 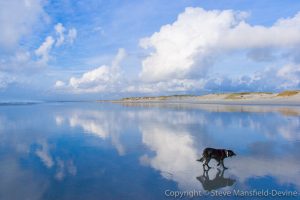 Zola on a previous visit to La Plage de Tronoan

The 20-odd kilometre beach is one of our favourite places. It was also a favourite of our beloved and much missed spaniel Zola. The beach slopes very gently and so, as the tide goes out, provides this massive shelf of firm and very reflective sand. Zola went mental on this beach. So we’d come back to the beach to scatter his ashes, and those of our cat Bembo. (They’d died on successive days earlier in the year and had been cremated together.)

There was another reason to be there, too. It was the day of the supermoon.

I’d grabbed a few shots of this phenomenon the night before. We were on our way home from a day out when we saw the unusually large moon hanging low over the port town of Audierne. 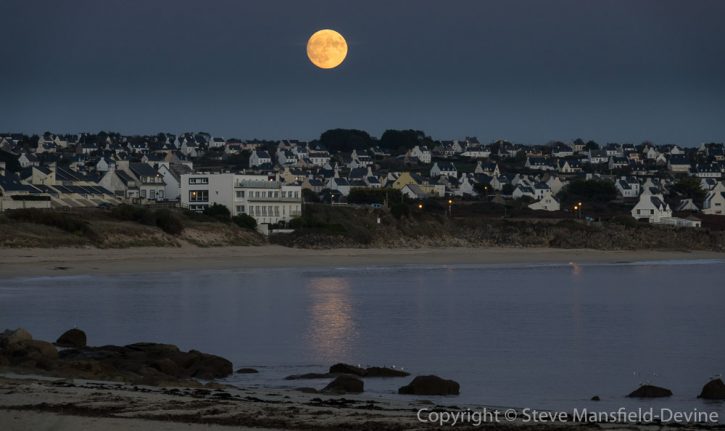 The following night, though, was when the moon would be at its maximum size. 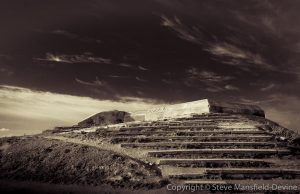 A group of people had gathered on the Pointe de la Torche. There are a couple of large wartime blockhouses, built by the Germans, at the highest point of the headland. These were carefully constructed so as not to disturb a couple of neolithic passage graves. With the main blockhouse resembling a Mayan ziggurat, it’s a weirdly ceremonial place. So having a crowd of people silently waiting for a celestial event seemed appropriate. Except they were looking in the wrong direction.

The moon would be rising in the East and everyone was looking West. So I asked someone why.

Now this is something I’d heard about. It’s said that, under the right atmospheric conditions, just as the sun has dipped below the horizon, the sky briefly flashes, well, green. Many people claim to have seen it. Just as many claim it’s an illusion brought on by staring at the setting sun for too long. Either way, none of us saw it that night.

What we did see is one of the most dramatic sunsets I’ve ever experienced. 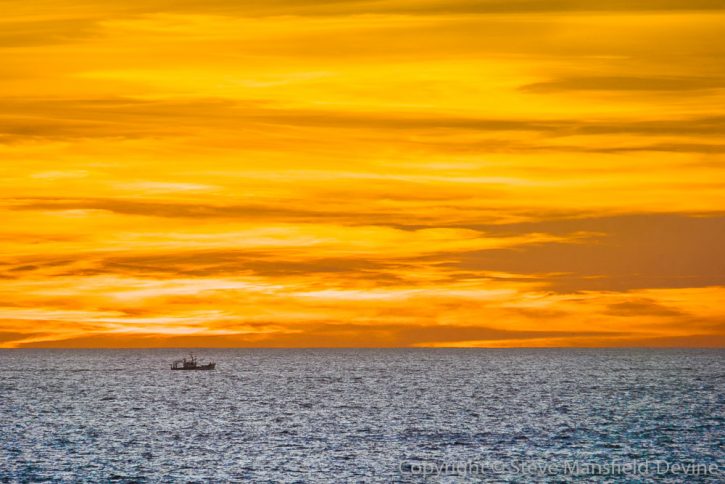 This image was shot on the Sony RX10 III with the lens set to its maximum focal length – equivalent to 600mm. I used a monopod to steady the camera, although the bright sky allowed for fast shutter speeds (1/640th at f/5.6). The fishing boat had just set out from Penmarc’h. This spectacular display lasted about 10 minutes before the light started fading.

Once I’d got enough shots, I turned my attention to the East and saw what I’d been expecting – cloud. “There’s not going to be any supermoon,” I told Trish, and we headed for the parking lot.

On the way to the car I turned back and saw a few hopefuls still atop the blockhouse hoping for a glimpse of the moon. 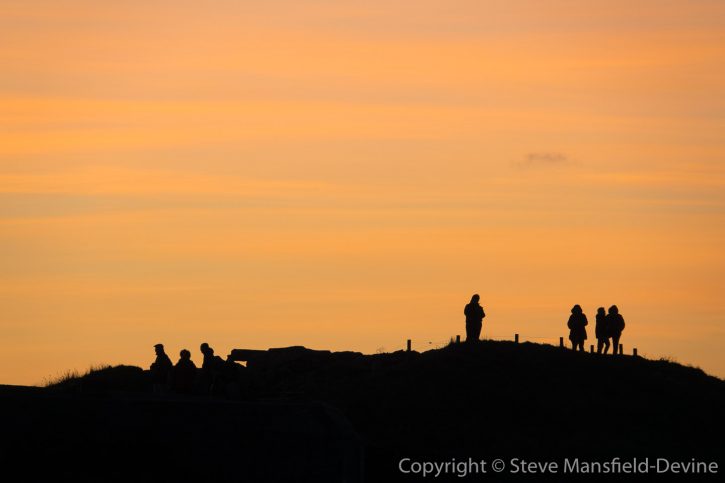 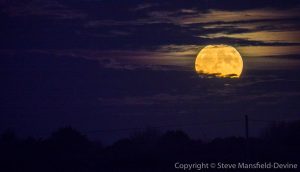 I stowed my gear in the back of the car. By now it was pretty dark. Then, just as we drove out of the car park we saw it.

The clouds had parted and there was the supermoon. I stopped the car in the road, grabbed the camera and tripod and tried to get a picture. Knowing the clouds would close again at any moment I rushed it. I’d perched the tripod on top of a concrete litter bin, but it wasn’t as stable as it would have been, so I cranked up the ISO setting to shorten exposure times. The result, alas, was noisy and not quite sharp enough. Oh well, it’ll serve as a momento of an important day.

That wasn’t it for La Pointe de la Torche on this trip, though. Three days later we’d be back so that I could get a picture of another, smaller blockhouse – which also appears in the exhibition.