Behind the image: Champ d’orge, Normandy

A significant proportion of my landscape work is about the traces that mankind leaves in the environment – or, as I call it, the Layered Land.

Some of the signs are obvious, others less so.

One of the themes I’m currently developing is about crop marks. No I don’t mean those strange symbols created by pranksters and which the more emotionally fragile in society believe to be the work of aliens. I simply mean tracks and other signs of human existence.

Above is a barley field I photographed recently when we were cycling a newly opened voie verte (greenway) in Normandy.

Of course, crop fields are inherently artificial. Their existence bears witness to the relationship between humankind and the land – how we both shape it and depend on it.

But, at the same time that the crop plants themselves wouldn’t have existed without being deliberately and carefully planted, the form and nature of the resulting crop field is often dictated by the underlying or adjacent terrain. The curves in the following image were necessitated by the meandering of a nearby stream.

Across the road from where I shot the above image is a field of barley. It’s my favourite crop. The barley heads are beautifully frondy (yes, that’s a word) and the plant moves in a strangely seductive way in the slightest breeze (maybe I’ve been in the countryside too long…). Anyway, that’s where I got this shot. 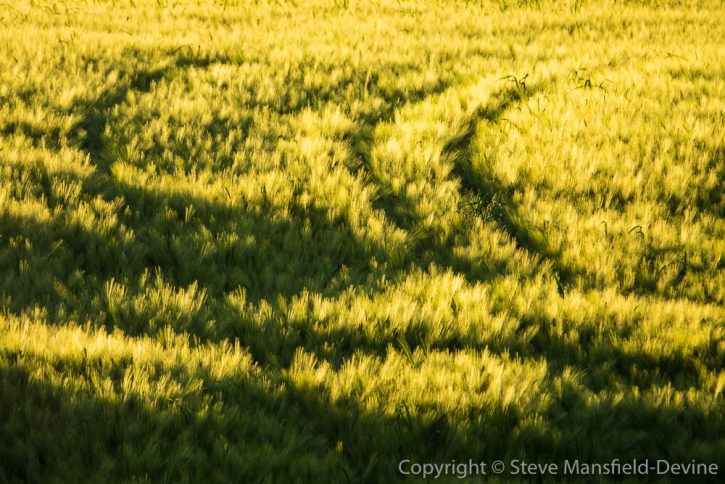 This was taken on the Sony RX10 III with the lens at the 600mm equivalent setting. When I first viewed the image in Lightroom I thought it was blurred, in spite of having used a monopod and reasonably fast shutter speed (and the Sony’s built-in vibration reduction). In fact, it’s pin-sharp. It’s just an optical effect of those barley fronds.

The curved shapes are created by furrows left by tractor tyres, back when the field was planted. They remind me of the shapes you can see from the air, when the light is right, that alert archaeologists to the existence of ancient relics under the soil. In both cases, these are marks that mankind has made.