Exposure is an art unto itself. Contrary to what the computer built into your modern digital camera might be telling you, there is no one ‘perfect’ or ‘correct’ exposure for any given shot. Choices made about exposure are as much a part of the creative decision-making as framing, lens selection and so on.

So why, over the years, have I spent so much money on light meters? Using a light meter somehow suggests a search for precision.

In fact, it’s more about being informed, and understanding your options.

The first SLR I used, the Zenith B, had no built-in meter. Luckily, when my dad bought it he also bought a Dixons branded, handheld selenium light meter. I felt that was essential. But my dad had managed perfectly well for many years using nothing more than a plastic calculator. I still have it. 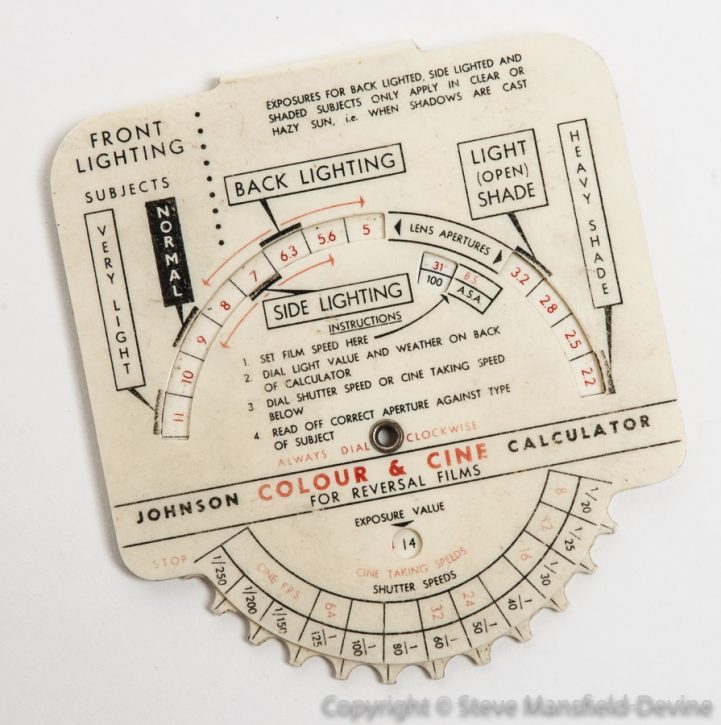 It looks crude but is surprisingly sophisticated. First you dial in the film speed, the options being ASA (which was equivalent to today’s ISO) and BS (British Standard). Then flip the calculator over. 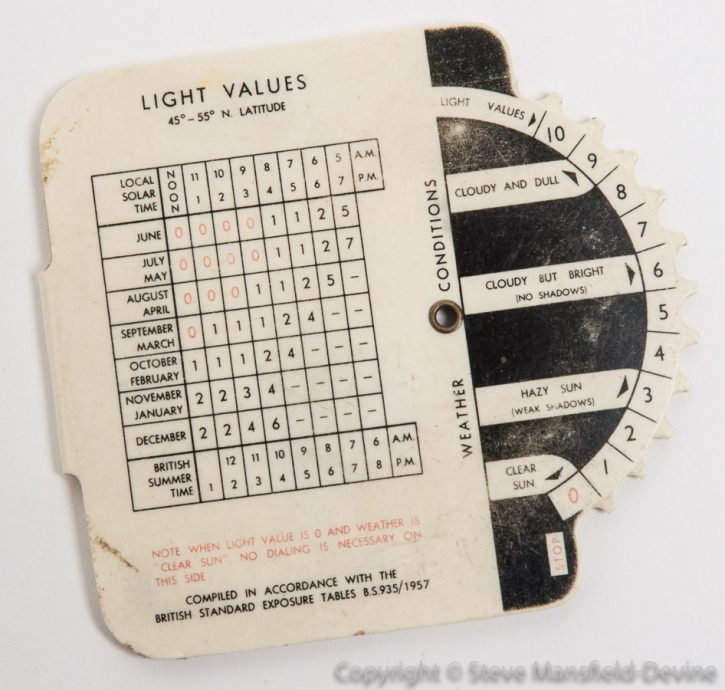 Select the appropriate light value by reading the table. Sticking your finger in the slot next to the relevant value and turn the dial clockwise until your finger reaches the STOP position. Do the same for the weather conditions. Then flip the calculator over once more and do the same dialling for the shutter speed you’d like to use. Then read off the appropriate aperture according to whether you have backlighting, sidelighting etc.

This is not a rote exercise. At every stage you need to make informed decisions about the conditions pertaining to the shot you’re about to take. The calculator says its ‘For reversal films’. Colour slide film has always had a very narrow latitude – that is, it’s famously intolerant of poor exposure choice. But my dad produced hundreds of perfectly exposed slides with this calculator – along with his experience, understanding of exposure and some common sense. 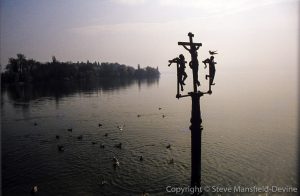 As an aside: The calculator was produced by Johnson of Hendon, famous for its range of photographic chemicals, printing paper etc. By coincidence, in 1982 (I think) I won the Johnson ‘Photographic Journalist of the Year’ award. This was open to journalists working on photography magazines (I was technical editor on SLR Camera at the time). It was just a bit of PR nonsense for the firm, but the cheque for £700 came in handy. On the right is one of the pictures that won me the prize.

As I was learning photography, I depended a little too much on what the light meter was telling me. Since I upgraded from the Zenith – first to the Canon FTb and then a succession of SLRs and DLSRs – nearly all the cameras I’ve owned have had light meters built-in, and many offer automatic exposure. I use the latter a lot, with a preference for aperture-priority mode because with the pictures I shoot the choice of aperture is usually a more important creative decision than the selection of shutter speed. 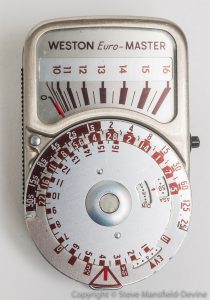 And yet I’ve also owned a succession of handheld light meters. When I went to college to study film & photography, my first purchase was the venerable Weston Euro-Master light meter. It’s 40 years old now but I still use it from time to time.

One of the things I like about the Weston is that it doesn’t need batteries. When I was still shooting on film, the cameras I used (Nikon F3 and FE-2) had ‘mechanical’ modes where they would still function at a single shutter speed even when the batteries failed. With that mode and the Weston I knew that I could carry on shooting completely battery-free, so this light meter always went into the kit when I travelled.

The other attractive feature is the circular scale of shutter speeds and apertures. It’s a very visual and immediate way of understanding your options when choosing an exposure. The scale also has U and O settings – for under- and overexposure. These are seven stops apart, reflecting the typical latitude of much reversal film of the time (or dynamic range, if you prefer). Judicious use of these settings helps you determine your options when you need to ensure you keep detail in either the shadows or highlights. 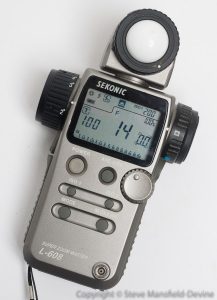 Something similar is available, albeit in a less intuitive form, on my current light meter, the Sekonic L-608. This is a sophisticated beast, incorporating incident, spot and flash meter capabilities, memory settings, averaging of multiple readings and more. To use it to its fullest capabilities, you do need to have an understanding of all the factors that affect exposure – much as my dada did when using that plastic calculator. But it’s also easy – too easy – just to follow its recommendations slavishly.

I mentioned that I tend to shoot in aperture-priority automatic mode on my current crop of digital cameras. Yet I also spend a lot of time dialling in exposure compensation. In fact, one of the features I love about the Fuji X100 and the Sony RX10 III is that they have nicely positioned dials that make it easy to do this.

Modern cameras are fitted with something resembling artificial intelligence. The exposure system of a DSLR makes decisions based on multiple criteria derived from large databases of images and advanced onboard processing capabilities. But in the end, for all the cleverness these devices, from the plastic calculator to the DLSR’s computer, there’s no substitute for real intelligence.