This is the third Black Rapid strap I’ve bought – not because I break them or wear them out but because they suit the way I work so well. 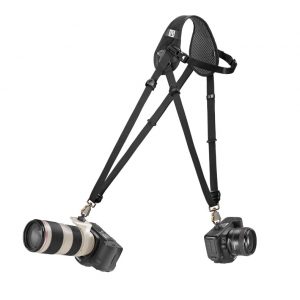 There was a time when I thought nothing of hanging two SLRs fitted with motordrives (yes, that long ago) and heavy, fast lenses around my neck. Then, a few years ago, I started to realise that I couldn’t even wear one reasonably lightweight DSLR this way. Arthritis in my spine, and particularly the neck, made wearing a camera like a necklace impossible. And even hanging one from a shoulder was problematic because of the way that makes you instinctively hunch.

For the same reason I stopped using a shoulder bag to carry my gear and started carrying lightweight backpacks.

I was contemplating switching entirely from DLSRs to compact cameras. In fact, this was one of the factors in my purchase of a Fuji X-100 (something I’ve never regretted).

Then I discovered Black Rapid. Its straps are based on the same concept as modern rifle slings. The strap hangs from a generous shoulder pad but goes across your body. There’s a carabiner-style clip that is free to run up and down the strap. And you clip this to your camera using the supplied faster which you screw into the camera’s tripod bush.

The result is that the camera hangs at your side and the weight is taken cross-body. After buying my first strap I was able to carry 2Kg worth of Nikon D800 and 24-70mm lens for hours without crippling myself.

Not long after I bought the first strap I purchased a second, slightly smaller model for the Fuji, which has since been pressed into service for my Sony RX10 III.

The effect has been liberating. When hauling around a single camera, it’s sometimes easy to forget it’s there. Thanks to clips on the strap that hold the camera in place, you can operate completely hands free. And yet when you want to shoot you can bring the camera to your eye in an instant. 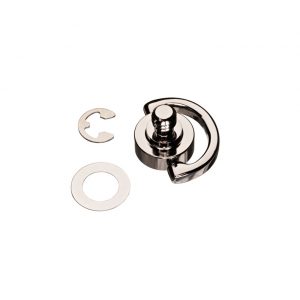 Fastener for use with Manfrotto rapid release plates

I find that the straps still function perfectly even when I’m wearing a backpack. I’ve also replaced the standard fasteners with ones designed to be used with Manfrotto rapid release plates. I use rapid release mounts on both my monopod and lightweight tripod. Clipping and unclipping the camera with the strap’s carabiner isn’t quite as easy as it is with the standard mounting, but I find I can move the camera between the strap and the monopod or tripod in about 10-15 seconds. Black Rapid also sells rapid release plates that are Arca Swiss compatible.

I also discovered a useful trick on a recent trip to Brittany. My Manfrotto carbon fibre monopod has a fitting at the top designed to take a wrist strap, which I long ago removed. I found that the Black Rapid carabiner will clip to this fitting very easily. That means I can leave the camera on the monopod and carry the whole thing from the strap, although I do need to steady the somewhat unstable combination with my hand, so it’s not quite as carefree as using the strap the way it’s intended.

On that same trip to Brittany, I also discovered that I needed to carry two cameras for a fair portion of the time. Well, no problem, I thought. I have two straps.

So I wore both straps, one on each shoulder, crossing over my chest like a Bandito who’s run out of bullets.

And it kind-of worked. There were two downsides, though.

Having two straps across my chest made getting into my jacket a complex and frustrating affair. I couldn’t get to my wallet, so my More Significant Other had to buy all the drinks while we were on holiday. (That’s my excuse.)

The other problem was that the shoulder pads tended to creep upwards to my neck, which became uncomfortable after a while. I’ve never noticed that problem when wearing one strap, and I’ve been using Black Rapid straps for a couple of years now. Maybe with one strap I instinctively adjust. Both of my older straps, by the way, are models that are no longer available.

So when I got back from the trip I ordered the Hybrid Breathe which is designed to take two cameras.

It wasn’t an easy or obvious decision. Black Rapid currently offers two straps designed to take two cameras. The Hybrid Breathe uses a single shoulder pad, with one camera hanging directly down and the other being carried on a cross-body strap as normal. The Double Breathe model has two shoulder pads with each strap hanging straight down. It prevents ‘camera hunch’ by linking the two shoulder pads together with cross-straps front and back. 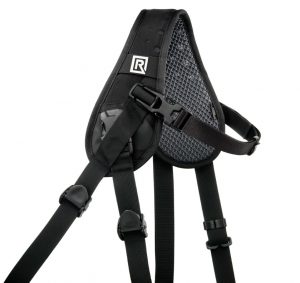 In practice, it works well. I put the lighter camera (the Sony RX10 III) on the left-side strap and the heavier D800 on the right. It feels very balanced and I’d hardly know I’m carrying an extra camera. The shoulder pad is prevented from slipping up towards my neck by an underarm strap. Getting the whole contraption on and off takes a bit of practice, but once on it’s not the least bit encumbering. And it still works well with a backpack.

Other manufacturers offer similar straps, often at significantly lower prices. But I generally find you get what you pay for when it comes to quality. The Black Rapid products are extremely well made and take a lot of punishment. Given that I’m hanging thousands of euros worth of equipment from them, that’s important to me.

It’s not just that the Black Rapid Hybrid Breathe is comfortable – as nice as that is. For me it’s more: I can now walk further and spend much longer taking photographs. And that’s important to me.

UPDATE 01/09/2017: Having been using this strap for a while now I’d like to add a few more observations: