What do you find acceptable in a landscape? It’s a somewhat strange question, I know, But not everyone comes up with the same answer. 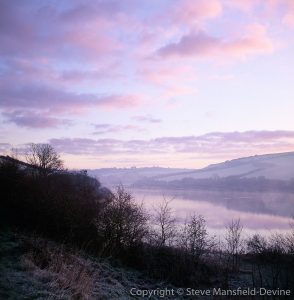 So let me tell you a story.

Many years ago, we were spending our Christmas in Cornwall. It was our habit to book a National Trust (NT) cottage as a refuge from that otherwise family-infested time of year.

On this occasion we were staying in a cottage by the side of the Loe Pool, a freshwater lake barely separated from the sea by a narrow sand spit. Around the pool were footpaths used by locals and (in December) the hardier species of rambler.

We’d unloaded the car and were just settling in to rest after our long drive from London when a chap pitched up at the door. He introduced himself as the NT warden for the property. In polite yet somehow very firm tones, he asked if we wouldn’t mind awfully moving our car to the back of the house where (and he was very specific about this) it couldn’t be seen from the footpaths.

Now I thought our Ford Sierra was a rather fetching shade of powder blue. But apparently it wasn’t considered an acceptable part of the view.

And that got me thinking about what is considered acceptable.

It can’t be that only natural things are permissible. After all, the cottage itself was hardly that. Was it the colour? The age? Are buildings okay but vehicles not? You could test that theory by plonking down an electricity sub-station and Victorian farmer’s cart and asking people which they find picturesque. I think we know the answer.

You’ll find that the judges of camera club competitions have some pretty firm ideas about what they’ll accept in a landscape photograph, even if there’s no formal list. If there were such a list, electricity pylons would definitely not be on it.

So what about wind turbines (or éoliens, as the French more romantically call them)? They are a matter of rabid debate, with many people declaring them eyesores. Why, I don’t know. I find them magnificent monuments to mankind’s ingenuity. They’re like white giants striding the landscape.

And it was this moment in Cornwall that sowed the seed of The Layered Land project. Because as I looked around at, and photographed, the landscape, I realised just how much of it is in some way shaped or modified by human activity.