These mounds appeared one day in a neighbour’s field. They were just piled-up earth that he left so long that grass grew on them. 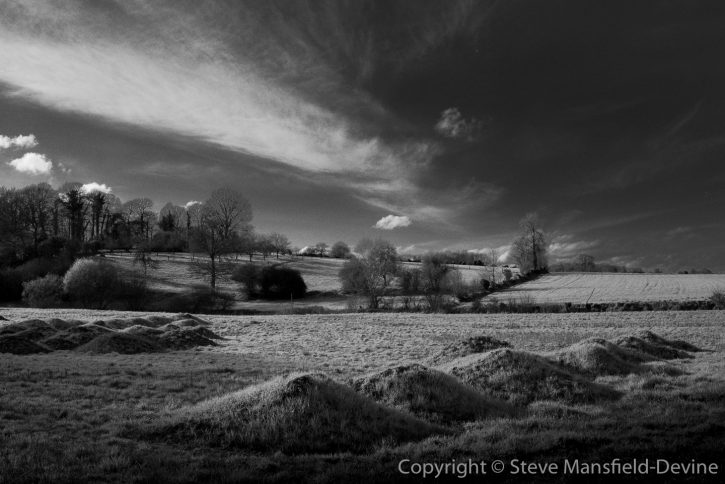 They reminded me of bronze-age tumuli. Because what is a tumulus other than a mound of earth? Well, yes, tumuli were also graves, but what I’m saying is that there’s nothing special in their structure or formation. There’s nothing mysterious or magical in their physical nature. The significance we ascribe to them (and I assume this was the same for their creators) is that they are there, calling attention to their existence.

The people who created ancient tumuli could have buried their dead in the ground with nothing to mark the spot. But even we don’t do that. Today, if we don’t cremate the departed, we mark their burial places with stones or even grander monuments. Respect for the deceased and a need to leave a permanent marker that they existed are good enough reasons for doing this. Perhaps ancient tumuli are evidence of similar needs and desires, because those ancient people weren’t so very different from us.

What’s interesting about the tumuli, though, is the place they take in the landscape. Unlike a modern grave, they are not huddled in special and rarely visited enclaves, separated from daily life. Back in the bronze age, people probably saw and passed by these tumuli all the time. (We have to assume there were far more of them now than we have physical evidence for today, as farming and construction have certainly eradicated their traces.)

Is it their association with death and the rituals that always attend it that gives the tumuli that survive today such an aura of mysticism? Perhaps. I found it interesting, though, that these mounds in Patrick’s field, created so casually, almost accidentally, could so effectively counterfeit this sense of mystery. As monuments in the landscape, with no clear function, we find ourselves wondering, “what went on here? What are they for?”. It’s almost a shame that the answer is, nothing.

» See the Incidental Monuments portfolio in The Layered Land »