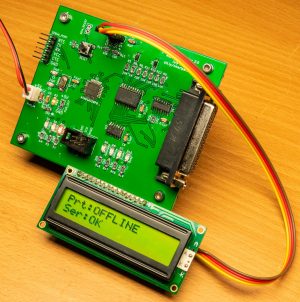 This is an interface board built around the Atmel ATMEGA328PB microcontroller. It accepts input, and sends messages, via a serial port that can talk to any other device. Text sent by the remote host is printed via a Centronics (DB-25) parallel port.

My aim in building it was to allow a Raspberry Pi, acting as a printer server, to print to my venerable Epson MX-80 F/T III dot matrix printer.

Using a microcontroller allows me to reconfigure the interface any way I see fit. That’s what makes it ‘smart’.

I’ve written Go code to run on the Raspberry Pi which will take the contents of a text file and print it, line by line, to the SmartParallel.

I’ve also created a web interface, but that was some time ago and probably needs work.

Along the way, I also hacked up a Centronics breakout board with shift register for the data signals as a kind of half-way house.

And I designed a serial level shifter daughterboard to allow the SmartParallel to be used with devices that have 3.3V signals.

The main function of this code is to sit and wait for incoming messages on the serial port. It also sends updates and status messages as appropriate via serial to the host.

Incoming messages are assumed to be one of two types:

Either way, the message must be terminated with a null character (ASCII 0). If bytes are received on the serial port but no null terminator arrives within a given time, the program times out and dumps the characters received. Also, if the incoming buffer fills without having received a null byte, the final char is replaced with the null byte and we go with what we’ve got.

Commands are sent by making the first byte ASCII 1. The next byte is the command. The details of the commands are (or will be) on the GitHub page.

Any incoming bytes where the first one isn’t a 1 are assumed to be text to print.

The commands and other details of the code are more fully detailed in the README.md file on the GitHub page.

This code also manages an LCD display which shows similar messages to those sent via serial.

This is a command line utility for the Raspberry Pi. It accepts a filename input and assumes that given file is a plain text file. It prints this file via the SmartParallel. Full details are in the README.md file on the GitHub page, linked below.

Minor updates to the project will be added here. Major updates (if any) will also probably get their own blog posts.