This page will be (ir)regularly updated as necessary…

Other projects that have been started and are at some stage of development. These are the next candidates for ‘current project’ status.

A 6502-based homebrew microcomputer that propels us slap-bang into the early 1980s.

Who doesn’t want a robot? This is really what got me into electronics. The current design uses a tracked vehicle base. The aim is to equip it with all manner of sensors and explore emergent behaviour and maybe even stuff like machine learning.

Using an ATTINY microcontroller as a way of giving otherwise dumb sensors (eg, ultrasonic rangerfinders, IR rangefinders, proximity sensors and the like) some degree of autonomy. This will require developing my own serial communications protocol (a fancy term for bit-banging) which I’m calling SensorBus. This is part of the Sheldon project.

A serial-to-parallel printer interface – primarily intended to let me use a Raspberry Pi as a printer server attached to my venerable Epson MX-80 F/T III dot matrix printer. 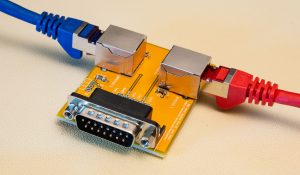 A simple little project – just a matter of wiring, really. But it does involve a couple of PCBs that allow me to connect the joystick to the computer via standard Ethernet cables. I used this project as a way of getting back into KiCad after a spell of not using it (during which time version 5 had arrived). 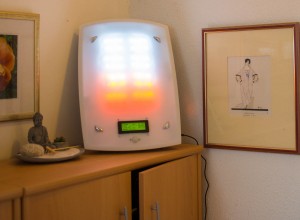 A way of waking up gently. It fades up lights (64 LEDs), plays birdsong, then music, then switches to the radio. It monitors the temperature, and sends reports to a local server via MQTT. Configuration is via its built-in web server. But mostly, it eases us into the day. My first major project. I was very naive and ignorant about electronics – but hey, it worked. 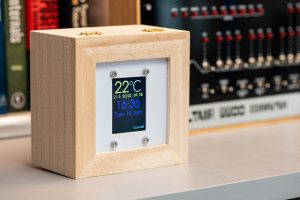 A simple temperature and humidity sensor, an ESP8266 board and an LCD display. WHat more do you need?

I built a couple of these, mainly as a way of learning KiCad and how to get PCBs fabbed. They communicate over our home wifi with our intranet server, using a web API, logging the temperature every 5 mins. They were fun to put together, but I’d do them completely differently now.

These are projects that have been started but, for one reason or another, are on the back burner. 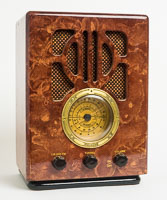 For a while, I had trouble getting to sleep. I was using ambient music to help me drift off. Rather than using my iPhone or an MP3 player, I figured I’d build a Raspberry Pi Zero, plus DAC and headphone amplifier, into this retro-looking radio, which would also serve as a bedside light, controllable over the network via MQTT. But this has gathered dust because my sleep problem went away.

A 1960 HMV radio that I gutted and am using as an excessively large case for a Raspberry Pi.

A Raspberry Pi acting as middleware between my BBC Master Turbo and the network (and, by extension, the Internet). I already have the serial connection sorted. The rest would be software.

I rescued an old Minitel terminal from the local recycling centre. I’ve toyed with the idea of hooking it up as a terminal for a Raspberry Pi or some other single-board computer – but, well, you know…