This selection from ‘Big Doug’ Selway’s trove of documents on the 1950s Elliott 405 mainframe computer takes us right back to the basics.

First up is a ‘functional block diagram’ of the system. And what I find interesting about this is:

This documents was produced by LEAPS, a department of the Royal Mail, and so was presumably aimed at employees who were actually working directly with the machine. 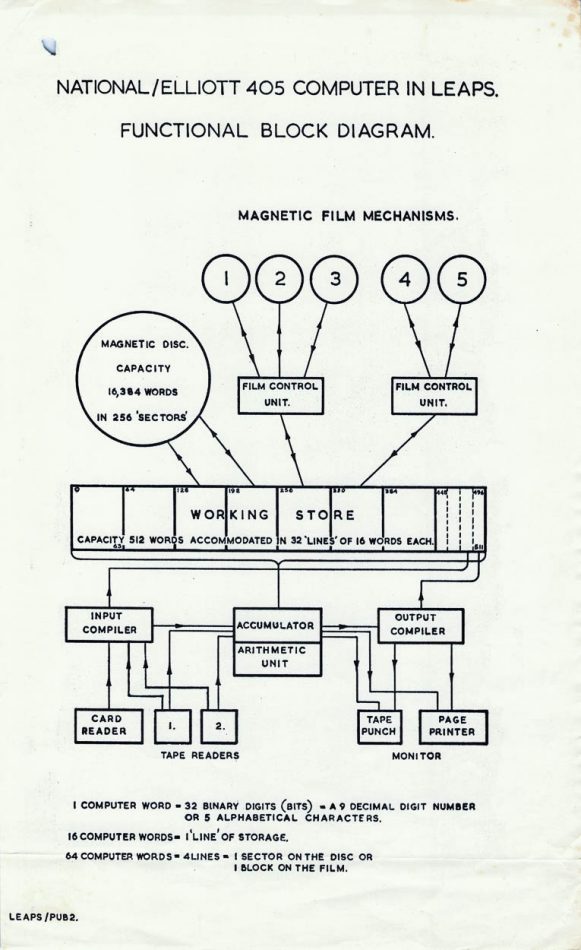 In a similar vein, we have a typewritten document – I suspect put together by Big Doug himself – providing an even more basic introduction to what computers are and how they work. Alas, Big Doug is no longer around to explain why he wrote this brief but succinct overview. But one can hazard some speculation.

Computers were still new and alien things back in June 1958 when this document was written. Some people were afraid of them. Some were confused. Most were (understandably) ignorant. Perhaps Big Doug felt that a little bit of demystifcation was in order. 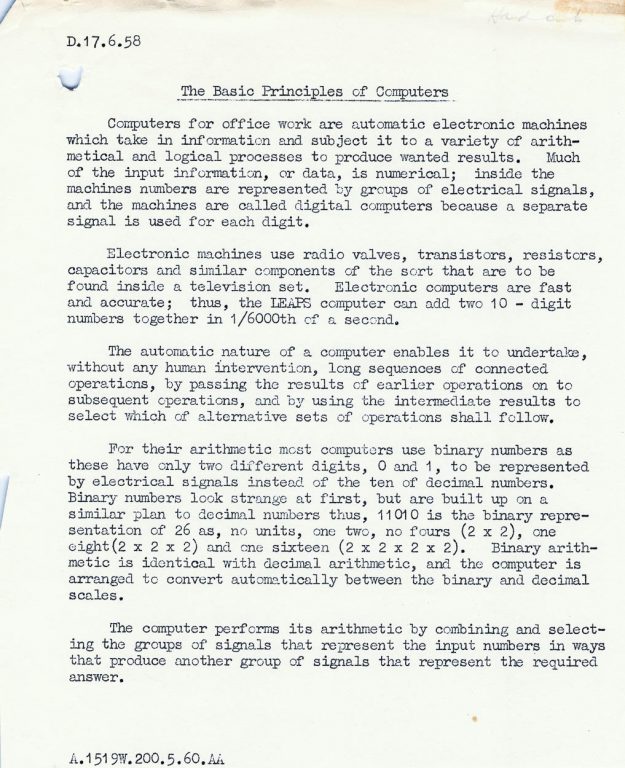 Here, for the sake of searchability, is the OCRed text:

The Basic Principles of Computers

Computers for office work are automatic electronic machines which take in information and subject it to a variety of arithmetical and logical processes to produce wanted results. Much of the input information, or data, is numerical; inside the machines numbers are represented by groups of electrical signals, and the machines are called digital computers because a separate signal is used for each digit.

Electronic machines use radio valves, transistors, resisters, capacitors and similar components of the sort that are to be found inside a television set. Electronic computers are fast and accurate; thus, the LEAFS computer can add two 10-digit numbers together in 1/6000th of a second.

The automatic nature of a computer enables it to undertake, without any human intervention, long sequences of connected operations, by passing the results of earlier operations on to subsequent operations, and by using the intermediate results to select which of alternative sets of operations shall follow.

For their arithmetic most computers use binary numbers as these have only two different digits, 0 and 1, to be represented by electrical signals instead of the ten of decimal numbers. Binary numbers look strange at first, but are built up on a similar plan to decimal numbers thus, 11010 is the binary representation of 26 as, no units, one two, no fours (2 x 2), one eight(2 x 2 x 2) and one sixteen (2 x 2 x 2 x 2). Binary arithmetic is identical with decimal arithmetic, and the computer is arranged to convert automatically between the binary and decimal scales.