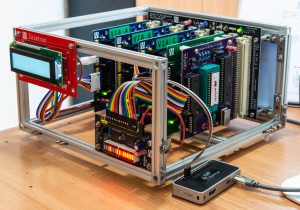 As I mentioned before, the Zolatron 64 6502-based homebrew computer (Z64) needs some kind of persistent storage. And these days there is no shortage of options.

If you search around the interwebz for homebrew projects you’ll discover a treasure trove of clever solutions. But many of these involve implementing some form of existing technology. For example, you can employ a 6522 VIA chip to produce an SPI interface so you can hook up to a Compact Flash or SD card device. You’ll need to write some code to handle the FAT file system, but there are lots of examples of people doing just that.

I didn’t want to do that. Part of the fun of building your own computer is coming up with your own protocols. And yes, many parts of the Zolatron project have taken inspiration from elsewhere. But, where possible, I want to invent my own stuff. My solutions might be slow, inefficient and unreliable, but they’re mine, dammit.

As to why I want some kind of ‘disk drive’ (I’m using that term loosely), it’s quite simple. Currently, all the software for the Zolatron is in ROM (or EEPROM, to be precise). Every time I write new code, I have to power down the machine, pull out the EEPROM chip, put it in the programmer, write the code to it and then do the previous steps in reverse. It’s not difficult, but it is time consuming. And, as we’ll see, it has the downside that I need to be in the same room as the Z64.

I already have a Raspberry Pi Zero 2 W – dubbed the Imp – connected via serial to the Zolatron. It acts as my terminal and I access it over SSH from my laptop or desktop machines. And I was looking at all those lovely, unused GPIO pins on the Pi thinking about how they remind me of an IDE connector. Hmm…

And so it’s time to crack out another 65C22 Versatile Interface Adapter (VIA). I’m using one of its eight-bit ports as a byte-wide parallel data bus. And I’m using four of the pins on the other port as signal wires for my bit-banged interface – to which I have given the ambitious name of ZolaDOS.

The solution is in two parts. There’s client code on the Zolatron, in the ROM. And there’s a server program (called zolados) running on the Raspberry Pi. I wrote the server code in Go. I won’t go too deeply into that here. I will, at some point, upload it to my GitHub.

And there are two controlled by the Raspberry Pi server:

All of these signals are active low.

All operations are inititated by the Zolatron, so the server’s zolados program starts off just listening and waiting for a sign that something has to be done. At this point, the Z64 is treating the data port as an OUTPUT and the Pi has it set to being an INPUT. The Z64 also has a 16-bit pointer set in memory to point to where the first byte of data should go.

So far, I’ve only got as far as being able to load a program into memory. This is how it works:

The LOAD sequence. Note that this shows the sequence, not timings, so the horizontal axis is not to scale. Click on the image for a closer look.

You can see that’s there’s a lot of waiting involved, each instance of which is potentially blocking. And so I made life difficult for myself by building in timeouts for each stage. Getting the length of the timeouts right was critical and caused much frustration at first, but was ultimately worth it. On the Z64 side, I used the VIA’s Timer 1 for these timeouts.

It actually works surprisingly well. But you may have noticed no mention anywhere of filenames. That’s because there aren’t any.

The Pi is programmed to send the contents of a predefined file – named zd.bin. That’s it.

That might seem a little limiting, but at this stage it’s enough. My desire is to be able to upload user programs into the RAM of the Z64, and this achieves that. What follows is my workflow for writing code now. This assumes that the zolados server program is running in the background on the Imp, and that I have a SSH session open to the Imp where I’m running a terminal program communicating with the Z64:

What could be simpler?

To upload a different program to the Z64, I simply switch directories in VS Code and use the same shell script to upload that program.

I am planning to extend the LOAD command to allow for named programs, although that’s going to involve a lot more code on the Z64, including error checking for things like ‘file not found’. But for now, I’m very happy that I can get user code into RAM and can now write and run software without constantly reprogramming the EEPROM.

How fast is it?

You may be thinking that this bit-banged interface sounds slow. And you’d be right. But I can live with it. A session with the logic analyser suggests that I’m getting more than 400 bytes/sec transfer speed – closer to 480B/s for the actual data transfer bit, ignoring the preamble overhead at the beginning. An 8KB program would therefore take about 18 seconds to load.

The logic analyser shows a frequency of around 480Hz for the data transfer part of the process. Click on the image for a closer look.

So the manufacturers of NVMe drives are not going to be losing any sleep. But it’s still better than cassette tape (I think). And so far it has proved to be very reliable.