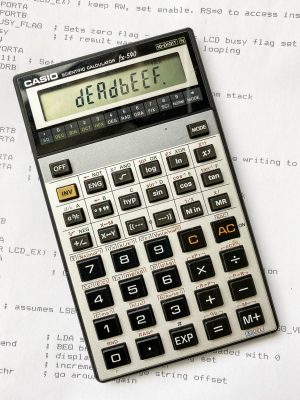 It was about to go in the recycling pile when I thought, “I wonder if I can save it.”

There’s no telling how old this lovely Casio fx-590 calculator is, because in spite of deploying my best Google-fu I can find very little information on it. One source suggested that maybe it came out at the beginning of the 1990s. But I reckon I’ve had this beastie since the mid- to late-1980s. I could be wrong there – memory is a fickle friend – but in any case it’s a 30-odd year old piece of kit.

It was the first calculator I bought that could handle binary and hex (and octal too, although I didn’t have much use for that). I bought it to help me with writing programs for my BBC Micro.

This innocent piece of plastic carries with it many fond memories of late-night programming sessions. It’s part of my history, which is why I hesitated about chucking it into the recycling.

It’s a 10-digit device, which is a bit limiting in binary. And if you fill all 10 binary digits, it assumes you’re working with signed numbers. You’re out of luck if you want a 10-digit unsigned integer. But it’s fine for byte-sized operations, which as a seasoned 8-bit hacker is fine by me.

The problem with this calculator, as I discovered a couple of years ago, is that it had started behaving in a very erratic manner. Once switched on, it might work fine for a second or two, then the screen would get scrambled. Or it would perform random maths operations, and the LCD would flicker faintly. Sometimes it wouldn’t turn on at all. And yes, I tried changing the battery.

On the verge of sticking into the bin destined for e-waste, it occurred to me that it’s probably a very simple device. Maybe the problem was equally simple.

Out came the screwdriver.

I didn’t take any pictures of the insides because, frankly, there’s hardly anything to see. The circuit board holds the battery, a trim pot (probably to control the contrast of the LCD) a handful of capacitors and just one IC.

The solder joints on the IC looked fine, but those on the caps and the battery connection had that old, dull, dried-up appearance. A bit of flux and a touch up with fresh solder and they were all nice and shiny again.

And I’m pretty sure that’s what solved the issue.

I cleaned the carbon contacts for the keys. And I pressed down on the LCD in case there was any trouble with the zebra strip making proper contact. And I also spent a happy few minutes putting the buttons back in the right holes. Yes, I’d accidentally spilled all the buttons on to my desk when opening up the calculator. Fortunately, I found a picture online that helped me get the placements correct.

(It was an eBay listing for a sample in working order, but with a dark patch on the LCD. Total cost, including postage, would have been around €30. So although the seller described the fx-590 as very rare, it doesn’t seem to have that much value.)

Now it’s working great. The LCD still has good contrast. And I’ve found that I retain the muscle memory built up back when I was programming the BBC Micro and was forever switching between decimal (Mode-0), binary (Mode-1) and hex (Mode-3).

This is an old friend, and I’m happy to have it working on my desk again. I still don’t know what many of the scientific functions are for, let alone how to use them. But that quick switching between decimal, binary and hex is a treat. And it’s much more pleasurable tapping these keys than clicking virtual buttons on an app.