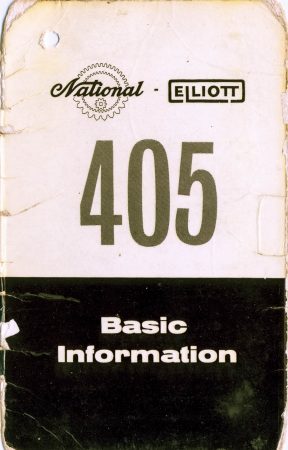 In among Big Doug’s small but treasured trove of documents relating to the GPO’s National-Elliott 405 computers is a small yet fascinating document that seems to be part cheat sheet and part marketing material.

The six-page, fold-out booklet is handily sized to fit into a shirt pocket, along with your pocket protector and 6H pencil.

Most of the National-Elliott 405 Basic Information document is taken up with specifications. We’re told, for example, that the machine can output to paper tape at the blistering rate of 20 characters per sec. Things get faster when writing to film (that is, mag-coated 35mm film in 1,000ft lengths). That happens at 300 characters per second, or 1,800 when transferring from film to line printer (at least, that’s how I read it).

None of this is going to worry today’s Seagate or Western Digital much. Storage speeds are always a touchy matter, with so many factors at play. But let’s say that an NVMe drive might do sequential writes at 5,000MB/s. That’s 40,000 Mbits per second. Put another way, it’s 40,000,000,000 bits per second. 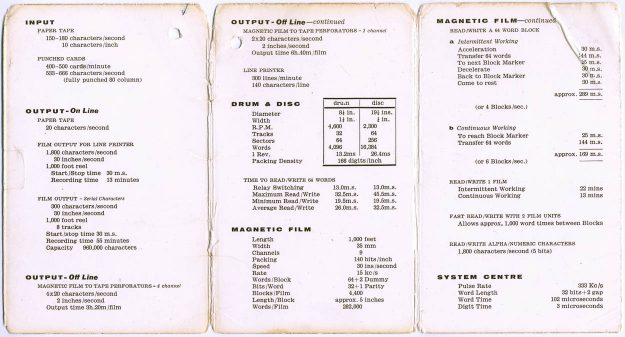 The 405 is writing 64 33-bit words in 26ms for the drum. (I’m giving it the benefit of the doubt in assuming the parity bit is saved.) By my math, that’s 81,230 bits per second. So, a slight difference. And I know there’s a lot to argue about in those numbers, but we’re just having fun here and a speed increase of nearly 500,000 times is worth having. 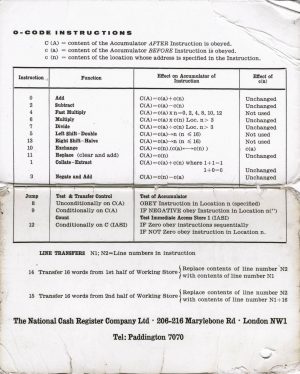 The other pages of the leaflet are taken up with what appears to be the Elliott 405’s instruction set – or ‘O-Code Instructions’. There’s not a lot to them.

There are just 15 instructions (helpfully numbered 1-15), eight of which do basic maths operations on what appears to be a single accumulator.

Three instructions relate to ‘jumps’ – ie, conditional or unconditional branching. And two allow you to move data from a storage location.

This is reduced instruction set computing (RISC) at its finest. Move over 6502. Eat my dust ARM.

The booklet is well-thumbed. I can just imagine Big Doug having this on his desk as a reference while scribbling furiously with a pencil as he mapped out his first programs.

Why this might seem a paucity of instructions, remember that the function of the LEAPS 405 machine was to handle payroll – that is, to calculate and collate fairly simple numbers. No-one was doing any fast fourier transforms or 3D modelling with these beasts. Nor were they trying to run Crysis.

It might be fun to try writing a usable program with just these opcodes. Any takers?