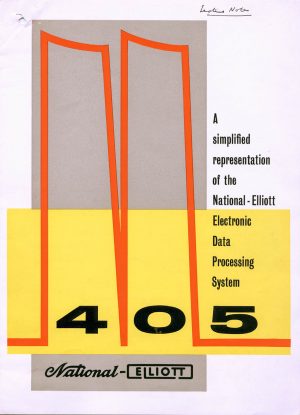 There’s something about  this brochure that just screams 1950s. The graphics on the cover, for instance, are straight out of Mad Men.

‘A simplified representation of the National-Elliott Electronics Data Processing System’ is the kind of brochure you wouldn’t think was necessary – or appropriate – for this kind of machine. The Elliott 405 wasn’t something you bought on a whim, or while intending to shop for a new stereogramme.

Purchasing a mainframe computer of this kind usually involved committees, exploratory talks and months of negotiations. What part a six-page brochure would play in that process is hard to fathom. And yet, there it is, in Big Doug’s stash of documents from his days at the GPO.

Once folded out, the main three-page spread provides an overview of the 405’s capabilities – input on the left, processing in the middle and output on the right.

This is logical enough. But I also like the way it (more or less) echoes the von Neumann architecture.

It lists lots of input sources, including accounting machines (whatever they are) and cash registers. The ‘National’ in National-Elliott comes from National Cash Registers, after all.

Ultimately, though, everything goes via a paper tape reader or a card reader. There’s no mention of teletype input. And this reflects the intended purpose of this kind of machine. Note that it’s referred to as an “Electronic Data Processing System”. EDP was the buzz term, rather than ‘computing’. So while the Elliott 405 may have been Turing complete, its range of applications was seen in fairly narrow terms – primarily number crunching for the accounts department. 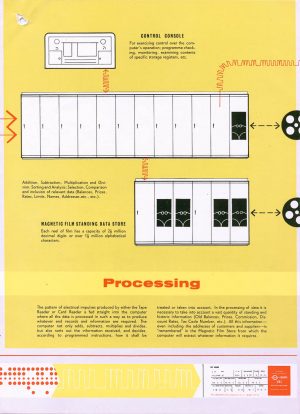 The processing page details what the machine can do with your input – namely: “Addition, Subtraction, Multiplication and Division; Sorting and Analysis; Selection; Comparison and inclusion of relevant data (Balances, Prices, Rates, Limits, Names, Addresses, etc, etc).”

It also mentions (as per von Neumann) storage – via 35mm mag-coated film.

When it comes to getting stuff out of the machine, we’re really spoiled, with no fewer than three options – paper tape, film to paper tape conversion and line printer. Heady stuff. 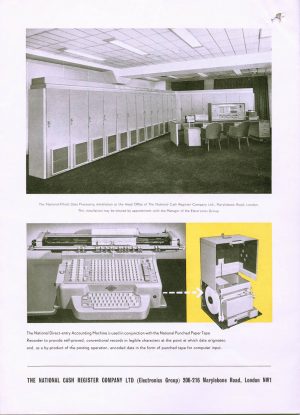 Actually, I’ve probably been a little unfair to the Elliott 405 in suggesting that it’s largely a glorified calculator for spitting out invoices and receipts.

The ‘general notes’ page gives hints about other applications:

Whether an Electronic Data Processing System is installed principally for the purpose of mass-producing Documents of Commerce and essential internal records, or whether it is installed according to a more sophisticated programme to incorporate the provision of accurate “stop-press” information for the purpose of scientific management and policy determination, the system will only afford its greatest benefits if it is designed expressly for the purposes of processing business data.

It then goes on to boast of the 405’s three levels of data storage that make the machine so ably designed for these functions – including 512 words of high-speed memory, the 16,384 words of intermediate storage on magnetic disk and the longer term storage on magnetic film.

I’m still not sure what “stop-press” means, though.