When a project doesn’t work, there are so many things that could be wrong. Is it the code? A loose wire? A misconfiguration of some kind? Or do you just not know what you’re doing (my favourite)?

The uncertainty is exacerbated when you’re using vintage integrated circuits. Old ICs have a habit of going bad. In some cases, this is due to mishandling at some point in their lives – especially if they’re CMOS chips that have been subjected to static. In other cases … well, they just die of old age.

Debugging is fun. But it can also be frustrating. And not knowing the health of a chip just makes life harder.

You can often rig up some kind of test to see if a chip is functioning. But that rig is likely to be different for every kind of chip. 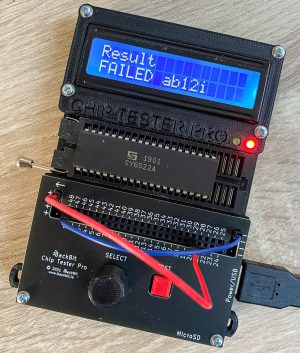 Things are not looking good for this ‘6522’ chip. The error codes tell me it failed every test.

Luckily, there are such things as chip testers. And I recently invested in one.

It’s the Chip Tester Pro by Evie Salomon at BackBit.io.

The device is slightly biased towards those chips used in the Commodore 64 and derivatives. As I’m building a 6502-based computer, which therefore has a similar architecture, then that’s fine by me. In any case, the tester’s firmware is under active development, by Evie and a community of users, and so its utility has rapidly grown beyond that original use case.

The tester is compact and easily powered via USB. It has a micro-SD slot you can use to simply and quickly update the firmware as well as saving the contents of ROMs that you want to dump. (I haven’t tried this yet, but it seems like a handy function.)

A while ago I wrote about how I’d struggled to find a reliable, working 6551 ACIA chip for the serial port on the Zolatron 64. With such obsolete chips, there are lots of fakes on eBay, as well as many dead chips. I wound up with a surprisingly large number of them. And although I’ve got the serial port working, I still wasn’t entirely sure which chips could be trusted.

Testing is a simple and fast process. Before inserting the chip, you use the rotary encoder (which is also a push button) to first select a family of chips and then the precise one you want to check. The display then provides instructions on setting up the flying leads, basically connecting positive and ground to the appropriate pins. Having the instructions on screen means that, once you’ve used this tester once, you’ll likely never need the manual again. Finally, put in the chip and hit ‘Test’. With a particular chip configured, you can rapidly test multiple samples.

Which is what I did with the 6551 chips. This tester quickly identified the duds. Alas, there were a lot of them, including a couple I thought might be okay.

The manual for the tester warns that a ‘pass’ doesn’t necessarily mean that the chip is good. There’s only so much a tester can test. It can’t get deep into the nitty-gritty of every logic function. But a fail is a fail.

While I was at it, I tried some 6522 VIA chips. The two 65C22 samples I bought new from Mouser passed without a murmur, as you would expect. The two ‘vintage’ chips I bought off eBay failed miserably.

This tester can’t answer every question you might have about a chip. But it’s an invaluable part of the debugging process when things are going wrong. 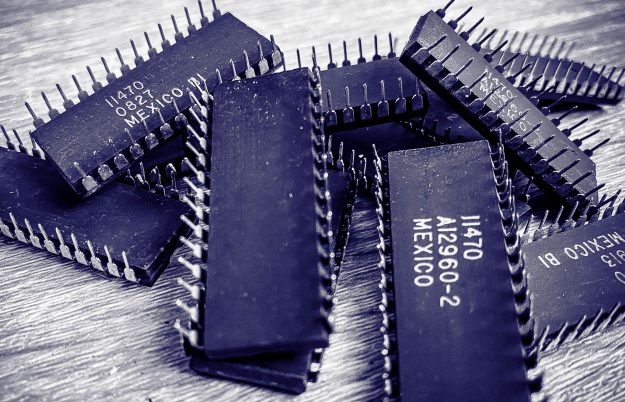