Just lately I’ve been getting into home automation. No, not with ESP8266s and lots of soldering and programming – that comes next. I mean the easy way, by buying smart lightbulbs and switches.

We have an old, dark house, which means we use a lot of lamps. Every morning, in the living room alone, we’d go around switching on seven lamps or power strips. During the day, some of these would need to go off for various situations – watching the TV, reading in the evening etc – and then back on. Then they’d all need turning off at night.

To a geek, that’s an insultingly manual procedure. So I went for a bunch of smart lightbulbs, a smart power strip and some smart switches – all HomeKit compatible – and an Apple HomePod Mini. We now have smart lighting in three rooms, and it works great.

As someone whose day job is in cyber-security, I got to wondering about whether these devices were talking behind my back – phoning home to their robot masters. I’m of the opinion that what happens in my house, stays in my house (And yes, Siri, blah blah … but you can’t have everything perfect.)

Well, there’s an easy way to find out. My first step was to use the DHCP server on my Netgate SG-2100 router/firewall to assign IPs to these devices within a specific range. 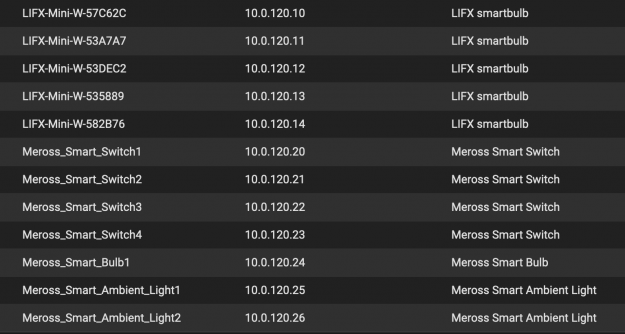 You’ll notice that the devices are all from either LiFX or Meross. That wasn’t deliberate – it just happened that way. LiFX is an interesting company in that it publishes detailed information about the cloud-based and LAN-based APIs for its products. You can find plenty of Python libraries on GitHub to take advantage of these if you want to control the devices with your own software. But that’s a subject for another day.

The Netgate router is connected to a Netgear smart switch. This allows you to assign one of the Ethernet ports to do ‘mirroring’. In other words, you can tell it that all packets passing through port X should also be sent to port Y.

I have an Odroid H2+ acting as a server in my ‘datacentre’ (two shelves in the spare room). One nice feature about this machine is that it has two gigabit Ethernet ports. I hooked the spare one, enp3s0, to the mirroring port on the switch. That interface on the Odroid could then see every packet that was going through the firewall. 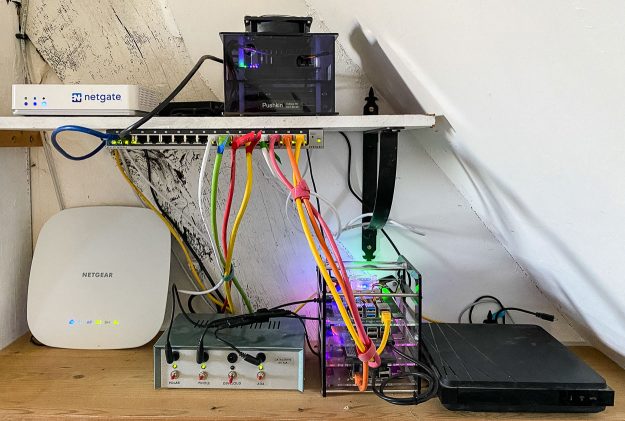 As you may know, tshark is the command line version of Wireshark, the famous packet analysis tool.

Next, I issued the command:

This captured all the traffic on Ethernet interface enp3s0 that was coming to or from the subnet 10.0.120.0/24, other than broadcast and multicast packets, and saved it in pcapng format to a file. It did this for one hour (3600 seconds). The result was 1401 packets! 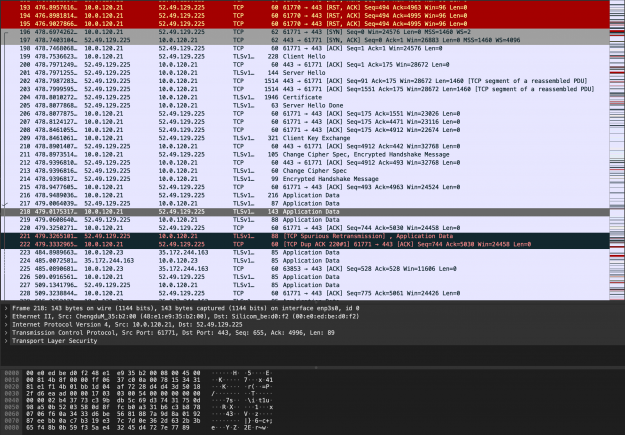 Although that’s a lot of traffic to contemplate, it quickly became apparent that it was all from the Meross devices – nothing from the LiFX lightbulbs. Also, the IPs the devices were talking to were Amazon Web Services (AWS) servers and the traffic was TSL encrypted.

Filtering out TCP packets, plus DHCP and ARP (which only go across the local network anyway) I was left with the above – the switches carrying out NTP queries – checking the time, for whatever reason.

I’ve decided to block TCP traffic through the firewall for the 10.0.120.0/24 range to see if it has any effect on how the devices function. I’ll let you know what happens with updates to this post.

5 thoughts on “Are my lightbulbs phoning home?”