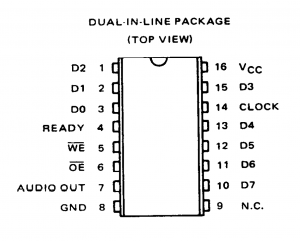 If there’s one sound that makes me nostalgic, it’s the brrrrr-BIP! noise of a BBC Micro being switched on. And that sound – as well as pretty much all the Beeb’s audio capabilities – can be traced to one chip – the Texas Instruments SN76489.

This chip was used in a whole host of devices, including Sega consoles and arcade games machines as well as home computers from Sord, Memotech and others.

Luckily, these chips are pretty easy to find on eBay. I couldn’t make out a date code on the one I used for this experimentation, but I assume it’s old stock of some kind.

And it’s also easy to use.

The ins and outs

The pinout is pretty simple. There’s a pin for audio output which you need to feed to an amplifier. Most schematics suggest doing this via a capacitor which acts as a noise filter. I used a variety of capacitor values and couldn’t detect that they had much of an effect. 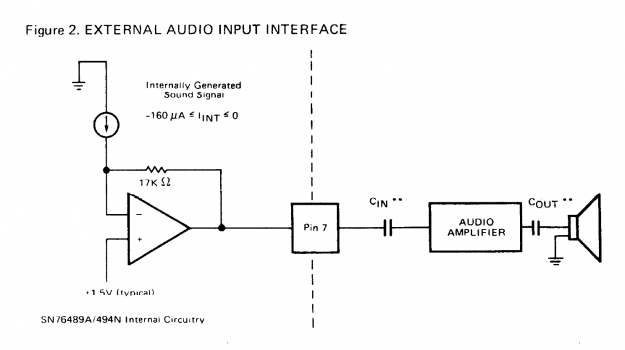 The datasheet suggests using a capacitor between the audio output pin and an amplifier, and another between the amp and a speaker. Your mileage may vary.

The main input consists of eight data pins (D0-D7) – essentially a byte-wide input bus. You write commands and data to the chip via these pins one byte at a time. In its infinite wisdom, TI decided that D0 should be the most significant bit and D7 the least. Whatever…

There’s an active-low /OE (output enable, aka chip enable). I just tied this low, but you could put this under programmatic control if you want to.

The active-low /WE (write enable) pin is an input. Whatever you’re using to control this chip – an Arduino in my case – pulses this low once data is set up on the eight data pins, and this tells the SN76489 that a byte of data is ready to be read.

You also need a clock input. In a computer like the BBC Micro this would be the main clock signal. For messing around with the chip, I used a 4MHz oscillator can. This matches the clock speed of the Beeb. On the version of this chip I have – the SN76489AN – this clock signal is divided by 16 inside the chip to create the internal clock. The maximum input clock speed is 4MHz. An ‘N’ version of the chip exists that divides internally by 2, has a maximum input clock frequency of 500kHz but requires only four clock pulses to load data compared to the AN’s 32.

The chip has only one output pin other than the audio. The READY pin goes low while it’s doing its stuff and then is set high again when the chip is able to accept more data. Theoretically, you could use this pin for flow control, but more often than not it was ignored.

My test setup for playing with this chip was pretty simple. I used an Arduino Nano with eight GPIOs (D2-D9) connected to the data pins on the SN76489. D9 on the Arduino was connected to D0 on the sound chip because of the whole D0 being most significant thing. 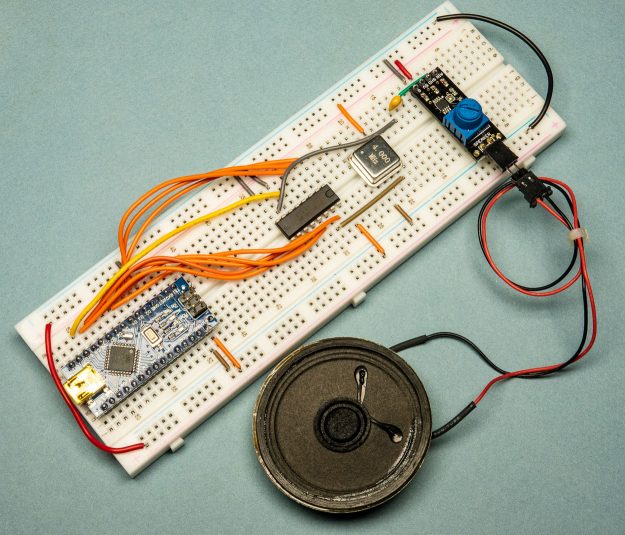 For a clock signal, I used a 4MHz oscillator.

The audio output pin of the SN76489 goes via a capacitor to the input of a tiny amplifier board that I had lying around. I imagine pretty much any amplifier might do for the purposes of playing around. Similarly, the speaker was a random device that was in my parts bin.

You could drive the eight data lines in a number of ways. On an 8-bit micro, for example, you might be tempted to feed these pins straight from the data bus. Alternatively, you could use a shift register.

On the BBC Micro (or, at least, the BBC Master I have) the lines are driven by port A of one of the 6522 Versatile Interface Adapter (VIA) chips. This port is also used for the keyboard and the MC146818 real-time clock chip. The /WE and /CE pins are commoned together and controlled via a 74LS259 addressable latch IC which itself is managed by four of the lines from port B of the same VIA chip. (The same four lines select other stuff, too.)

Using the chip involves the familiar process of writing values to internal registers. The 74LS259 offers four channels – three (channels 0-2) make tones and the other (channel 3) is a noise generator.

With the three tone channels, the tone register is 10 bits in size. This is obviously more than a byte, so we have to do some careful splitting up of this value to spread it across two bytes. We’ll get to that soon.

With the noise channel (3) the register is three bits in size.

The volume registers for all four channels are four bits, giving values in the range 0-15. Actually, ‘volume’ is a slightly misleading term as the chip defaults to maximum volume and the value you feed it is an attenuation value, so that 0 is maximum volume and 15 is silent.

Writing to the registers

The basic process with this chip is that you set up a byte on the eight data pins, then briefly pulse the /WE pin low to tell the chip that the byte is ready.

The byte you set up on the data pins is one of two types – a latch byte or a data byte. (To be pedantic, the latch byte also carries some data, but let’s keep things simple.)

You use the latch byte to tell the chip that you want to write to a specific register (volume or tone/noise) for a specific channel. Once you’ve ‘latched in’ the register, all subsequent data bytes will be applied to that register until you send another latch byte.

For example, if you send a latch byte that specifies the volume register for channel 2, all subsequent data bytes will affect the volume of that channel.

The meaning of the rest of the bits also depends on whether it’s a latch byte or a data byte.

Structure of a latch byte

In the case of a latch byte, bits 5 & 6 are used to present a two-bit value (ie, decimal values 0-3) signifying which channel we wish to latch.

Bit 4 is used to tell the chip whether we wish to talk to the volume register (1) or tone register (0) for that channel.

The remaining four bits (0-3) are data and are put into the lowest four bits of the relevant register. When you talk to a volume register (which is 4-bit), this is all the data you need. But we’ll talk in a minute about what happens if you subsequently send another data byte.

If you’re talking to the noise register (ie, the tone/noise register of channel 3), four bits is too many, as it’s a three-bit register. What happens is that the highest bit (bit 3) is simply ignored.

Structure of a data byte

As I mentioned before, a data byte starts with the most significant bit (bit 7) set to 0. Bit 6 is ignored. The remaining 6 bits are transferred to whichever register is currently latched.

First you would send the value 0b11001001. Let’s break down that binary number to see what’s happening, starting from the most significant bit on the left:

At this point, you might expect the tone register to contain the value 0b0000001001, but that’s a trap for young players. In fact, the upper six bits will contain whatever was last written to that register. But’s let’s assume, for the sake of argument, that those bits are, indeed, all zeroes.

What about setting the volume?

There’s no need for a subsequent data byte as the latch byte contains all the data the chip needs (the same goes for setting the noise register on channel 3).

What if we were to sent another data byte straight after the previous one? Let’s say we used 0b00101001. Here’s what would happen to the bits (left to right again):

You can therefore keeping changing the volume as much as you like without having to send another latch byte. Similarly, if you set the noise latch for channel 3, you can keep altering the nature of the noise using just data bytes.

With tones, it’s different. After latching in a tone register, subsequent data bytes will change only the top 6 bits – if you want to change the lowest 4 bits, you’ll need to send another latch byte.

What do you get out? Let’s look at tones first. The 10-bit value to set defines the ‘half-period’ of the resulting tone. That doesn’t help much, does it? Fortunately, the datasheet provides a handy formula for determining the output frequency of the tone, which I’ve rewitten as:

Here, f is the tone frequency in Hertz, Clk is the frequency of your clock signal and reg is the 10-bit value you put in the register. Given that you are likely to want to know the register value for a given frequency (eg, musical note), we can re-arrange this as:

The noise register on channel 3 is somewhat more complex, even though it uses only three bits. I’ll be honest and admit I don’t fully understand this, and the information here might be useful for people comfortable with terms such as ‘linear feedback shift register’.  But essentially, this is used to create white noise or various buzzes, burps and rumbles. The noise generator was heavily exploited for games (think, firing lasers or stuff blowing up).

Part of the fun with playing with chips is simply trying stuff out and seeing what happens. That’s what I did with the noise channel.

The code below is a simple Arduino sketch that got me up and running. (It’s not worth creating a GitHub repo for this.) I’m not claiming this is optimised code – far from it. It’s just what I hacked together to help me understand the chip.

You’ll note that the main loop is empty. All this sketch does is make a beep. Actually, it makes two noises. When the SN76489 is first powered up, it outputs a buzzy noise that BBC Micro owners will recognise as the first part of its two-tone startup sound. With a 4MHz clock, the output generated here vaguely resembles that of the awakening Beeb.

[UPDATE 21/04/2021]: There were errors in the original listing I mentioned above – probably as a result of cutting & pasting. And I couldn’t find a copy of the original program. So here’s another that plays Daisy Bell. Most of you will know why I chose that. It seems to have the code for the Beeb start-up beep still in it.