Regular readers will know that, in real life, I’m a photographer. And I’ve been one for a long time, which means many of my images were shot on film.

They’re not going much good just sitting in filing cabinets – I need digital copies, which is where this project comes in.

But first, some caution is required: if you like finely crafted, immaculately engineered devices … well, brace yourself. This ain’t that.

The mechanical side of things is not where my strengths lay, if I have any. And I don’t much care. This is a device designed to do a job. If it functions as intended, I’m happy. So yes, this project involves ill-fitting parts hot-glued together. You have been warned…

I have around 12,000 35mm slides in my photo library, plus a bunch of 6x7cm ones and a handful of 6x6cm (or 2¼-square, if you’re of a certain vintage). When the digital age dawned, I invested in a Nikon Super Coolscan 9000 ED film scanner – a 4,000dpi beast capable of handling medium format as well as 35mm. And I digitised a lot of my slides with it, but by no means all. One reason I didn’t do the whole lot is that scanning with the Nikon is agonisingly slow.

I still have the scanner, but the last time I used it I realised dust must have got in. The images were fuzzy. I steeled myself to go inside and clean it. And then never quite got around to doing that.

In the meantime, I read about photographers getting good results from using their cameras to copy slides. I already had a 105mm macro lens capable of 1:1 reproduction for my 36MP Nikon D800. All I needed was some way of holding a slide steady in front of the lens and a light source behind it.

I’ll spare you the early ideas I considered, and even built, but ultimately rejected. One idea I settled on was to use the rail system that I bought back when I was making short films. This is a convenient way to hold something in a fixed position in front of a lens – a light in our case. 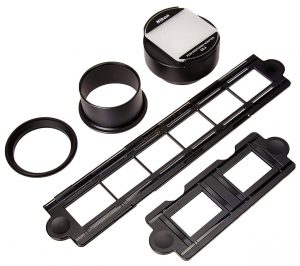 I solved a large part of the problem with money – by buying a 60mm macro lens and the Nikon ES-2 adapter. The latter screws right into the filter thread of the lens, provides an image holder – one for two 35mm slides, another for a strip of six negatives – and has a built-in diffuser. The kit comes with adapters for a couple of different focal lengths – but, alas, my 105mm wasn’t one of them.

In theory, you can just screw it on, point at the sky and snap away. And, indeed, I got some quite acceptable results that way. But I want to set up a rig that produces consistent results, quickly. That means having a dependable light source. I also didn’t want to be staring at a bright light for hours on end.

Let there be light

The answer was to build a light source of my own. I invested in a strip of high-CRI LEDs. The colour rendering index (CRI) is a measure of how much of the spectrum the light produces. Although an LED might appear to be ‘white’ and have a specific colour temperature, it may not be putting out light at certain wavelengths. The CRI scale measures what percentage of visible light wavelengths the LED produces – the ‘completeness’ (to coin a phrase) of its spectral output. CRI 100 would be perfect, but anything over 90 is good and the 96 of the LEDs I’m using is more than enough for this purpose.

Power for the 24V LEDs comes from a standard LED driver.

I needed something to mount the LEDs on and, thinking that they might produce some heat, I figured that a heatsink would make the perfect surface. I bought a 100x80x30mm block via eBay. This happily accommodated seven strips of LEDs, with 24 LEDs per row. One of the reasons I chose this particular brand of lights is that the LEDs themselves are quite densely packed. By my maths, then, that’s 168 LEDs. 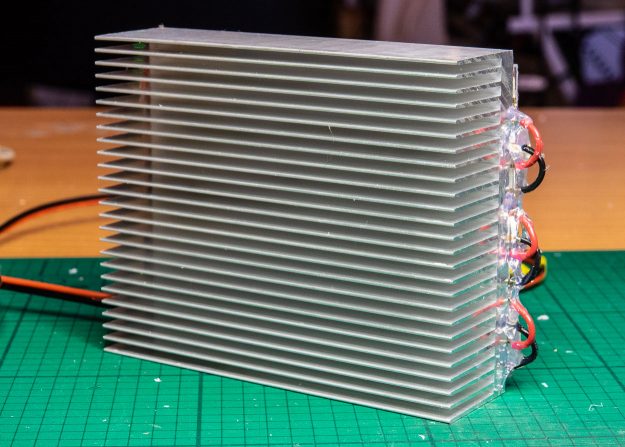 The sink-y side of the heat sink.

The power rails of each strip were connected to the next with short pieces of wire. Once firmly soldered in place, I added hot glue to protect them from getting wiggled accidentally and thus breaking solder joints. 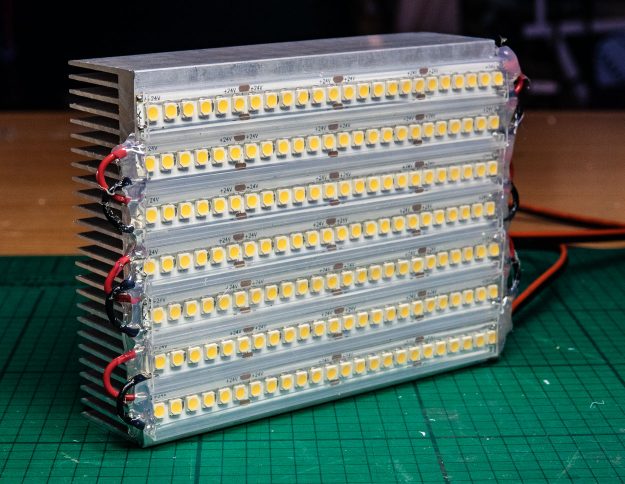 The LEDs stuck to the flat side of the heat sink and wired in series.

Next up, I bought 3mm thick sheets of plasticard (styrene) and used a hole saw to put a large hole in one – the 70mm size worked out perfectly to fit in the end of the ES-2. Then I cut the card to make an 80x80mm frame around the hole. On top and bottom, I glued some 100x70mm rectangles of 3mm plasticard, using some square-section tube to reinforce the joints. The heatsink with the LEDs slipped neatly between these and I fixed everything in place with self-tapping M3 screws. 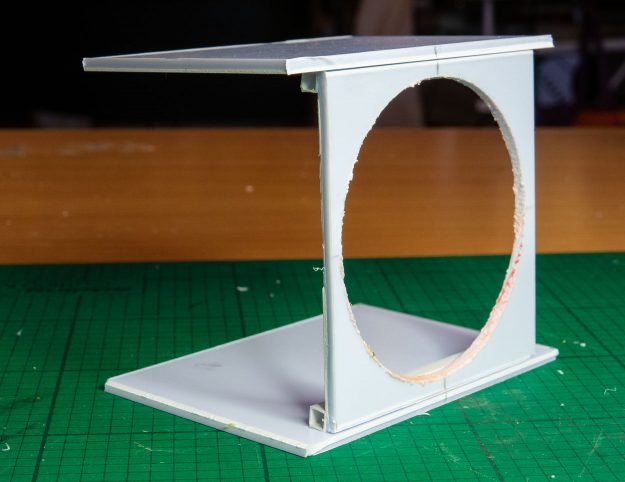 Then I glued two more rectangles of 3mm plasticard at the sides as light reflectors/baffles. These were angled.

All the plasticard joints were fixed using solvent glue, both applied to the joining surfaces and then brushed over the joints later. This makes for pretty strong structures. But I also followed up with some hot glue on the outside joints. And I haven’t ruled out black duct tape. 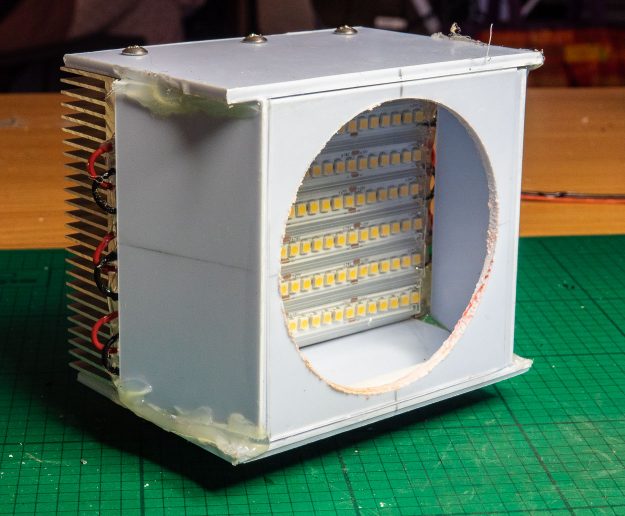 The completed … er … thing. I should think of a name for this. Feel free to admire the beauty of hot glue.

I said this wouldn’t be pretty.

The result is a box that mostly contains the light (so that I’m not dazzled) and also bounces around the light internally, helping to give an even illumination across the image field. This is also helped along by the fact that the area covered by the LEDs extends beyond the image area. By the time all this light has gone through the diffuser, there’s no possible trace of patchiness.

I spent quite a while pondering how to affix the whole shebang to the rail mounts. But as soon as I glanced in the ‘old photo junk’ drawer my eyes lit upon an aluminium disc with a tripod bush in the centre – part of an old tripod, I think. I mentioned this to my More Significant Other and she commented that, “Finally, your habit of holding on to every little piece of shit pays off.”

I drilled two small holes in the disc and corresponding ones in the heatsink (through the plastic) and attempted to mount the disc with self-tapping screws. This didn’t go well. The screw heads sheared off with the disc actually still standing a little proud of the surface. Ah well. I shimmed out with some 1mm plasticard then applied a truckload of epoxy. 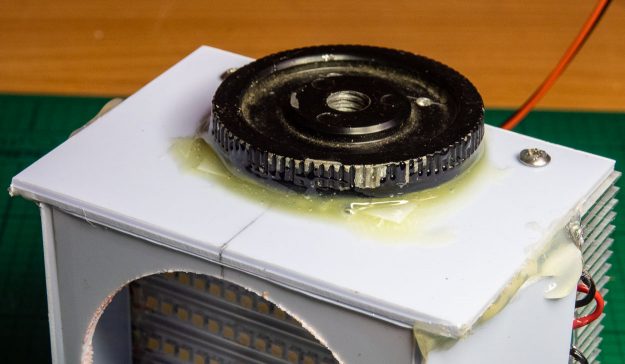 The screws are still doing a useful job of soaking up rotational forces and it’s not as though there’s going to be a lot of stress involved here. I’m pretty sure it’ll work.

It was time to mount the lightbox (that’s what I’m calling it now) on the rig. And it all went together pretty well. I powered up, switched the Nikon D800 into live view mode and… wait, what’s that? 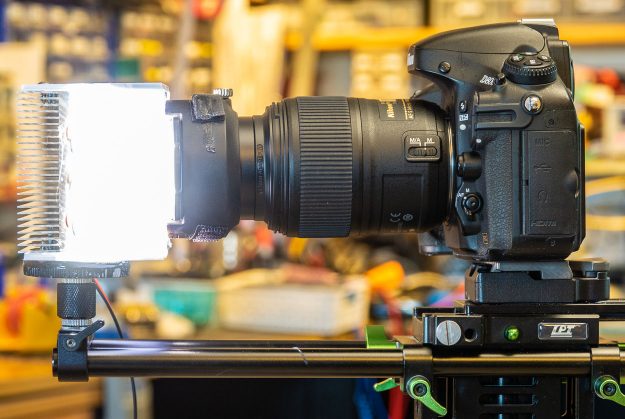 The image on the Nikon’s LCD screen was flickering annoyingly. Did I have a dodgy power connection for the LEDs? No. The LEDs themselves look rock-stable. Also, the flickering on the screen seemed to affect the top half of the image more than the bottom, and there was some weird tearing, like a corrupted image. Huh? 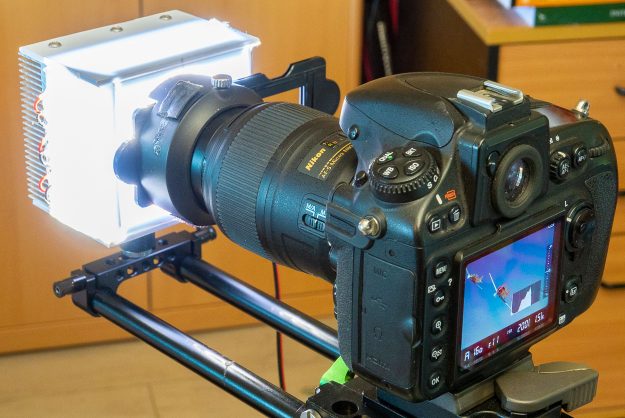 The lightbox looks much brighter in these pictures than it does in real life.

On a hunch, I ditched the LED driver and powered the lightbox from my bench power supply. The image was beautifully stable now. I’m guessing the the LED driver is using a switch mode transformer. This means the LEDs are actually flickering rapidly and possibly at a rate that was causing interference with the refresh rate of the Nikon’s LCD screen. Could this affect the actual image captured by the sensor? At shutter speeds of 1/125th-1/250th which I’m getting with this rig I guess it’s possible. But never mind – it’s no big deal to use the bench supply.

As it happens, I tried the LED driver again later and all was fine. Maybe it needed to warm up a bit. Who knows? Either way, I have powering options, so I’m not worried.

Now I just need to knuckle down to the job of digitising hundreds, maybe thousands of images. That’ll be fun…