My Zolatron 64 homebrew 6502 computer project has stalled of late. But it is high on the list of things to restart once I get current projects out of the way. And a recent development has inspired me to look at it again. 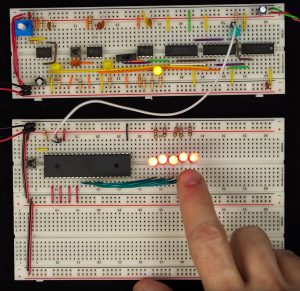 If you’ve been here before, you’ll know that my plan was to first build a kit – the Apatco NCS 2056T. And I’m half-way through that. It’s an excellent kit, with manuals that shed light on a lot of the concepts, such as address decoding. The trouble is, the kit is out of stock more than it’s in. It may even have been discontinued.

But despair not, because the inestimable Ben Eater is here to save us.

If you’re not familiar with Ben’s work on YouTube then I suggest you rush there as soon as you’ve finished reading this post. He is an outstanding educator, capable of demystifying key concepts in electronics and computing. His work on logic gates alone should have won an Oscar of some kind. And his 8-bit breadboard computer is justly famous.

Well, now Ben has embarked on a homebrew 6502 computer project.

What’s more, he’s selling kits so that you can follow along. At the time of writing, these were out of stock due to overwhelming demand, but more are on their way.

I already have all the parts – in fact, they’re not hard to find at Mouser, Farnell or the electronics supplier of your choice. Buying from Ben would involve relatively expensive shipping plus possible import duties for those of us in Europe. However, if you’re in the US, or can bear these extra costs, I’d strongly suggest buying from Ben in order to support him – he’s worth it.

(One word of warning – if you search for BusBoard Prototype Systems BB830 breadboards on Amazon what you’re likely to find are fakes, which you can tell by the way the power rails are split at the mid-point plus the bad reviews. These are the kind where it’s difficult to insert wires. If you want the genuine thing, go to a reputable supplier such as Mouser et al.)

I’m certainly going to be following along with Ben’s series (in parallel with building the Apatco kit). This is going to be a fun ride.