I’m easily pleased. Leave me alone with a breadboard, multimeter, oscilloscope and a previously unencountered IC, and I can amuse myself for hours. Well, minutes anyway.

It’s fun to fire up a chip and watch it do its stuff. And even more fun if it’s an old chip. But before we get to the IC itself, let’s fill in some background.

Anyone who has read Steven Levy’s book Hackers, or who knows the story of the early days of personal computers – and I’m talking about the 1970s here; the Altair, the Sol and all that jazz – will be familiar with the concept of the TV typewriter. 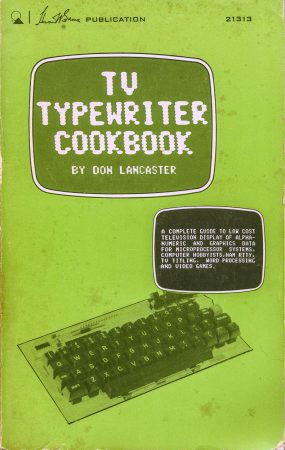 In essence, it’s a device that allows you to type characters on a keyboard and have them appear on a TV screen. I confess that, the first time I read Hackers, I couldn’t quite see the point of the TV typewriter. Maybe it’s because I was raised on the idea of a computer that you plug into a TV. The TV typewriter had no computing capabilities per se. It used a bunch of logic chips, character ROMs and display circuitry, but there was no processor.

It took a while to understand that the TV typewriter concept was born (and briefly lived) at a time when interactions with computers were not as we know them now. Even the more compact computers were the size of fridges, and many still took up whole rooms. A computer wasn’t a personal thing, it was something you shared, either by submitting programs on punch cards for batch processing (with a printout or more punch cards as the output), or time-sharing access via a terminal that was a glorified typewriter, with both input and output being printed on paper.

So one of the applications of the TV typewriter, with suitable additions, was as a video-based terminal – something still largely unseen outside of major institutions – you could use to connect to a remote or shared computer.

It was a technology that didn’t survive long. The new generation of home computers – Altair, Imsai, Sol and Apple – would render it obsolete. But I retained a slight fascination with the idea.

Back to the source 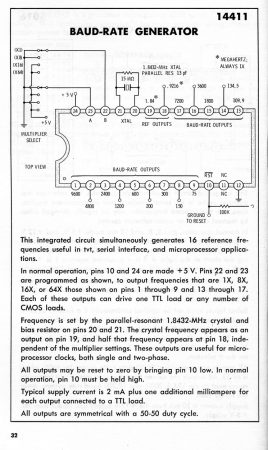 Recently, I picked up a (slightly grubby) copy of TV Typewriter Cookbook written by Don Lancaster, probably the best-known exponent of the concept. The book was published in 1977 and is a fascinating time capsule of the electronics of the age. As you’d expect, much of it is obsolete now, especially given that CRTs are largely a thing of the past. But his reasoning behind his choice of chips, often driven by the prices, makes for an interesting, historical read. Those prices, by the way, are either pretty much the same now or have become much cheaper, and that’s without allowing for inflation.

The book goes into intricate detail – enough for you to build several versions of a TV typewriter for different applications, such as video titling and, naturally, computer access.

Most of the chips used by Lancaster get a page each, with a description and notes on implementation. And one that caught my eye was the Motorola MC1441 bit rate generator for managing baud rates in a modem. ‘I could see myself using something like that,’ I thought. Hmm… 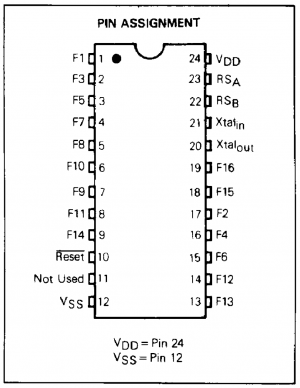 Off to Ebay I went and bought two. These are of more recent vintage – 1991. That’s still retro, though – right?

It’s a 5V chip, so no fancy power requirements. The other baud rate generator IC mentioned as an alternative, the 5016, requires both +5V and +12V. Lancaster frequently provides options when it comes to chip choice.

The Motorola datasheet for the chip suggests connecting a resistor in parallel with the crystal (ie, connected to pins 20 and 21 of the chip) but isn’t specific as to value. TV Typewriter Cookbook, however, shows a value of 15MΩ. Blimey. I had nothing suitable. My biggest regular 1/4W resistor was a 100kΩ. I guess I could wire 150 of those in series, but that could get a tad messy. I’m not sure how critical the value is, but Mouser provided me with appropriate resistors and a suitable crystal.

Inside the chip, there’s a frequency divider network that divvies up the input frequency into 14 handy output frequencies presented on pins F1 to F14. (These aren’t the IC’s pin numbers – see diagram above.) Exactly which frequencies you get depends on the setting of the two Rate Select (RS) pins, A and B. The normal setting is to have these two pins pulled low (the x1 setting), in which case the highest output frequency is 9600Hz and the lowest 75Hz.

Setting one or both of the RS pins high results in  all the frequencies being multiplied by 8, 16 or 64 times. As these are standard TTL input pins, that could be done under software control from a microcontroller or computer. 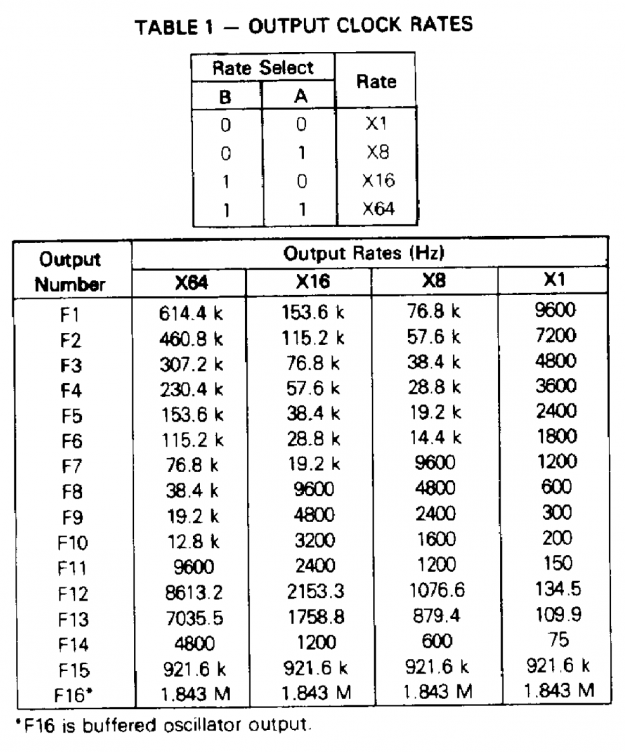 On to the breadboard it went. I hooked up everything while warming up the oscilloscope. I tied both RSA and RSB low, for the X1 clocks. And I kept /RESET high via a pullup resistor to the +5V rail. And… 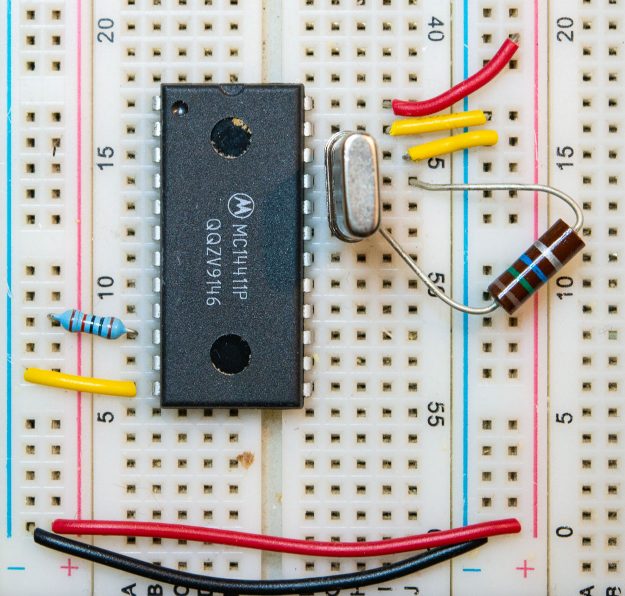 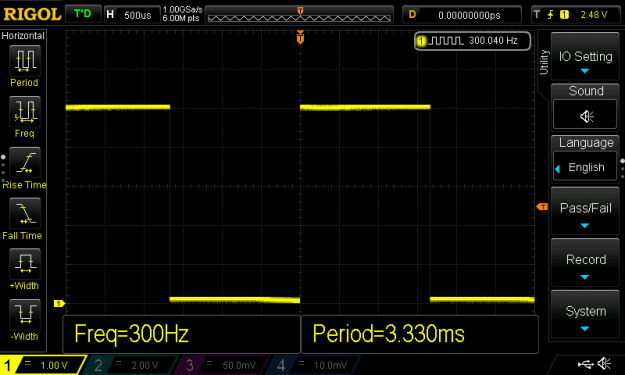 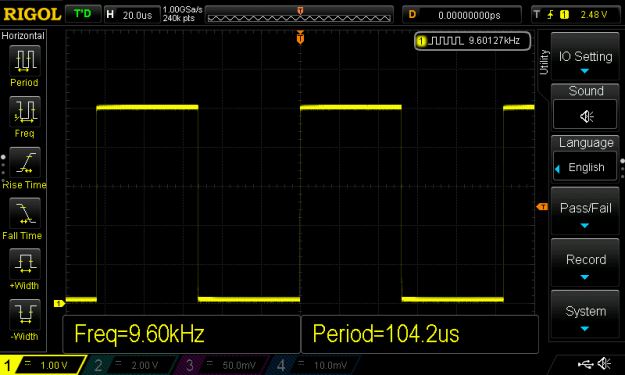 The waveforms are nicely square, with exactly 50% duty cycle. Things are not so crisp with the buffered crystal frequency output. 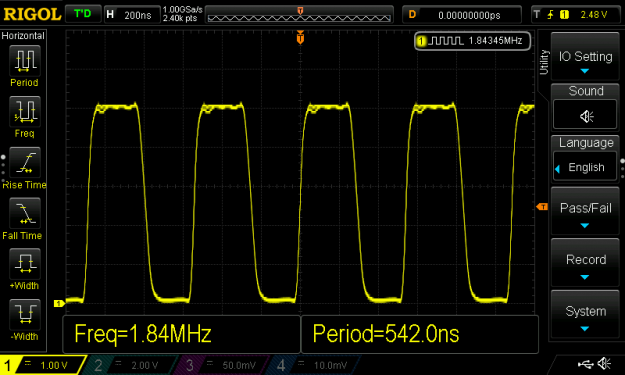 The frequency is still right, but the rise and fall times are a bit more sluggish and there’s a hint of ringing. Things aren’t much better at pin F15, which is half the crystal frequency. 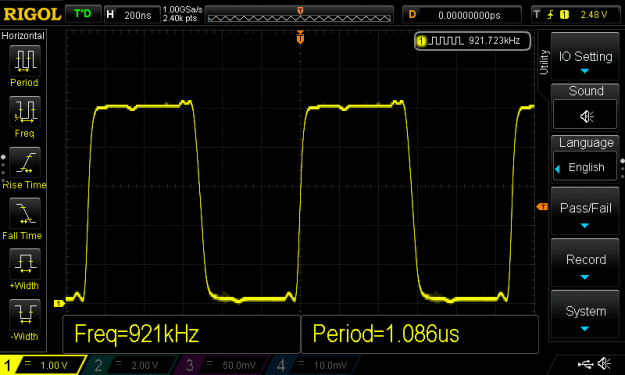 So there you have it. The 25 year-old chip works as it should, which is hardly a bombshell, but gave me a few moments harmless amusement. Now I just have to think of something to do with it.