I said in an earlier post that I was getting used to these two to three-week delivery times for stuff coming from China. The truth is, though, that I’ve never been good at delayed gratification.

Most of the breadboard prototype for the SmartParallel interface is finished (that’ll be my next post). All I needed was the DB25 parallel port socket.

There’s a bunch of DB25 sockets in my stash, all designed for PCB mounting. In an earlier incarnation of the breadboard version (not as complete as this one) I hooked up to one of these using ordinary jumper cables with DuPont headers. But it was fragile to say the least. The pins on the socket are thin and the jumper cables don’t hang on to them too well.

The socket won’t go into stripboard or proto board because the two rows of pin are staggered, making for a fine pitch. I wondered if I could, at least, solder the back row, which carries most of the important signals, into the row of holes at the edge of a piece of stripboard. But no. The pins look as though they’re standard 2.54mm (0.1in) pitch, but they’re not.  The pitch is more like 2.75mm.

Time to solder directly to the socket.

Eight of the pins on the socket are ground connections. Inside a parallel printer cable, each data wire would have an accompanying ground wire, with the pair being wound together to reduce interference from stray electrical or magnetic fields and to combat crosstalk. At the interface end, though, all the ground connections are commoned together. So my first step was to link the eight pins on the socket.

For this, I used wirewrapping wire. I used the wirewrapping tool to connect the wire to the end pin, then wound the wire through the rest of the pins, slalom style, finally wrapping it by hand around the eighth pin. 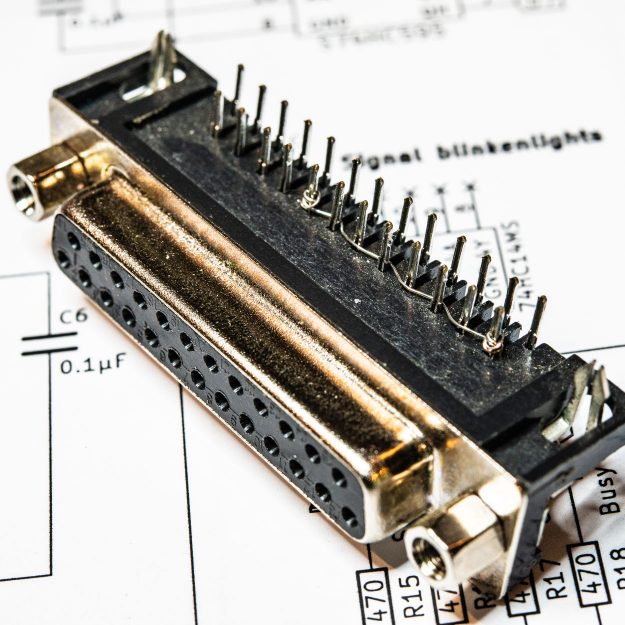 The ground pins connected with wirewrapping wire, shortly before soldering.

I then added some dabs of solder to keep everything in place.

Next I grabbed some jumper wires. This was a set I bought that came with the metal female connectors already crimped on but no plastic housings. I attached wires to the pins using the same colours that I’d already used on my breadboard layout (eg, yellow for the Strobe signal).

I then added a bit of solder to all the connectors to encourage them to stay put. A bit of heat shrink insulation on most of the connectors should help ensure there are no shorts.

Finally, I inserted the connectors at the other ends of the wires into four-position plastic housings, grouping the wires logically (eg, the eight data lines went into two housings) – except for the ground connection which is on its lonesome. This will make connecting to the jumpers coming from the breadboard faster, firmer and less prone to error. 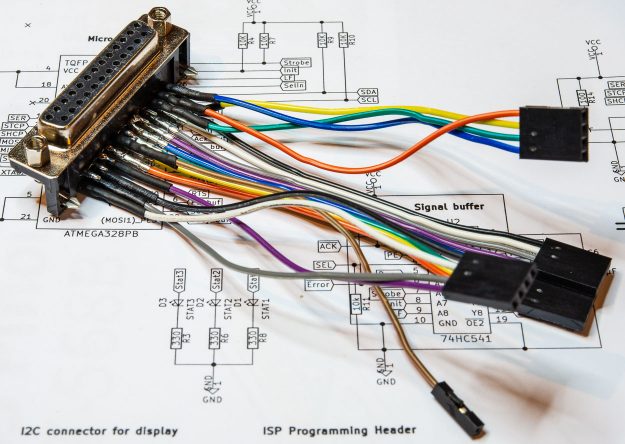 So there we have it. Theoretically, I’m all set to connect up.

In the next post, I’ll give some details about the breadboard circuit, and after that it’ll be time to test.