In the first part I described the interface between two RJ45 Ethernet sockets and the BBC Micro’s analogue port. The idea behind using RJ45 connectors is that you can use any old Ethernet cable to connect the joysticks.

But as these are homemade joysticks, they’ll need RJ45 sockets of their own into which one can plug the other end of the Ethernet cable.

I wasn’t going to write a post about this because all you really need is an RJ45 breakout board in order to hook up the wires going to the joystick and fire button.

But then I went and made another PCB. Why? 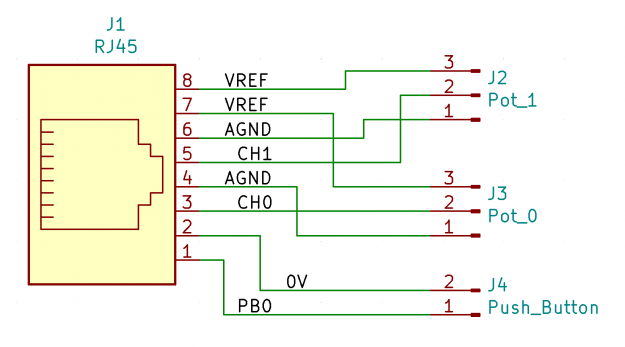 Yup, it’s just a breakout board. 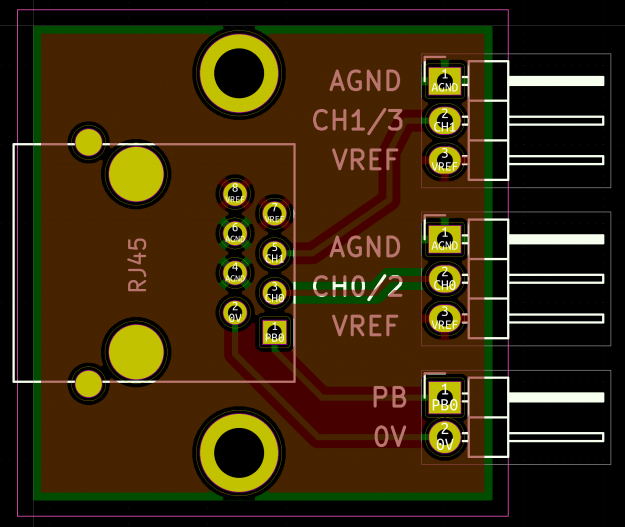 The PCB layout – pretty simple, but note the handy labelling.

This isn’t a cost-effective solution, but neither is it horrendously expensive.

My PCB order cost me $10.64. That’s via JLCPCB which will produce five boards for $2 as its most basic offer. But these boards are small, so I chose to panellise, with six boards per panel. This increased the order cost to $5.40 (plus shipping) but means I get 30 instead of five. (I don’t need 30. I don’t even need five, but I wanted to try out this panellisation malarky.)

[UPDATE 31/05/2019: I screwed up the panellisation. The panel needs to be at least 7x7cm to go through JLCPCB’s V-cut machine. The company picked this up during a board audit, immediately let me know and refunded my money. I re-did the order, opting for a 3×3 panel arrangement, rather than 2×3. This put the price up to $13.67, including shipping, and I’ll get 45 boards for that. What the hell am I going to do with 45 boards? Do you want one?]

So that’s a comparable cost, and yet the custom PCB route means I get something exactly the way I want it.

I’m liking this PCB thing, although it’s only cost-effective for stuff like this if you’re prepared to wait three weeks for the boards to ship from China. Ah well, all good things…