The PC I ‘built’ has been running happily for a couple of weeks now, so I thought I’d share a few final observations.

The PC runs smooth as hell and almost makes me like Windows 10. I’ve loaded VirtualBox because I think this will make a fine VM host, although I’m going to want to boost the memory from its current 16GB to at least 32GB.

In the other posts, I talked a little about storage. Here’s how things ended up:

I always knew I was going to run the OS from an NVMe for performance reasons. And I decided that that was pretty much all that drive would do.

I couldn’t bring myself to leave the other M.2 slot empty – I mean, it’s just there, begging me to do something with it. So I coughed up for another 256GB WD Black NVMe. I probably should have gone for the 500GB version, but was already over-budget. This drive has only one folder, SteamData, for my games data. I’ve loaded three games, with no mods or add-ons, and already it’s a third full. Holy crap.

The E: drive is a 256GB SSD that I happened to have lying around. I use Dropbox extensively for work and have a NextCloud installation for sharing development files (code and library folders). So I’ve dedicated this drive to ‘cloud’ folders.

And then, for general storage, I hit up Amazon again and installed a 1TB SSD. Currently, this has a single folder – for VirtualBox VMs – but I intend to use it as the main storage. I can see myself adding a second SteamData folder here.

The X: and Y: drives are actually two 2TB partitions on a single 2.5in 4TB HDD that was doing nothing. The reason I partitioned it this way is that I intend, sooner rather than later, to replace this with two 2TB drives. These will act as first-tier backup for the other drives. Having the drives installed internally means I can schedule regular backups. I’ll be using external USB drives for second-tier backup.

It’s tedious when people get obsessed with benchmarks and FPS rates. So I’ve not run any of the former and have no idea how to determine the latter. From a purely intuitive point of view, however, this machine seems fast. Damn fast.

Yeah, I know, it’s not a top of the line gaming rig. But Elite: Dangerous, Kerbal Space Program and DCS World have all, so far, run beautifully, with reasonably high settings and no hint of glitches. Once I’ve added X Plane 11, that’s be it for games and I’m pretty confident I have all the grunt I need. 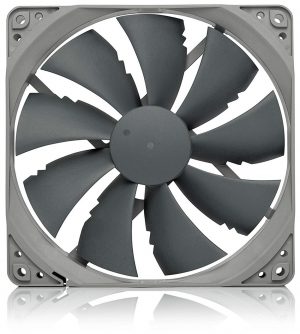 One additional change I made was to cooling. The Corsair Carbide SPEC-06 case came with two 120mm fans – one at the front and one at the back. The rear one had an annoying tick-tick-tick at certain speeds. So I replaced it with the Noctua NF-P12. Reviews of this PWM-controlled fan said it is very quiet. And it is.

I also added its bigger brother, the 140mm Noctua NF-P14s to the front of the case, positioning it directly above the existing fan. This created a slight problem – the blades of the new fan were contacting some part of the framework. Adding washers cured this problem.

The Asus Prime X470-Pro motherboard comes with the QFan feature to configure fan settings. I’ve left the CPU fan at its default profile, assuming that Asus knows what it’s doing there. (It reaches maximum speed at 70ºC).

The other fans are configured thus:

My experience so far is that there’s rarely any appreciable noise from this PC – which is how I like it.