The motherboard is a critical part of any PC build. Although your decision is guided, to a large extent, by your choice of processor, there are still many options, and so many decisions to make.

I’ve opted for the AMD Ryzen 7 2700X processor because it seems to offer the best power/price ratio. And that’s really all I have to say on the processor choice. It did, of course, dictate choosing a motherboard with the AM4 socket.

But what size? For me, this was clearly going to be an ATX build. I like small form factor PCs (I still own two Mac Minis), but one of the reasons for doing this PC build is to have a machine that is flexible and as powerful as I can afford. That means a full-size motherboard and a full-size case.

Gigabyte gets a lot of positive coverage, and so that’s the brand I looked at first. I’d watched a lot of YouTube videos that revolved around Gigabyte B350 boards, and so was first tempted in that direction. But as with other components, I talked myself into something more capable – something that would allow more upgradability.

That’s how I arrived at the AMD X470 chipset. But you know how it is when you’re struggling your way through an area that’s new to you. I spent hours trawling through specs, comparing prices, reading reviews. And while there was a Gigabyte board that was high on my shortlist, eventually it was pipped by the Asus Prime X470-Pro. Why? I like the way it looks. 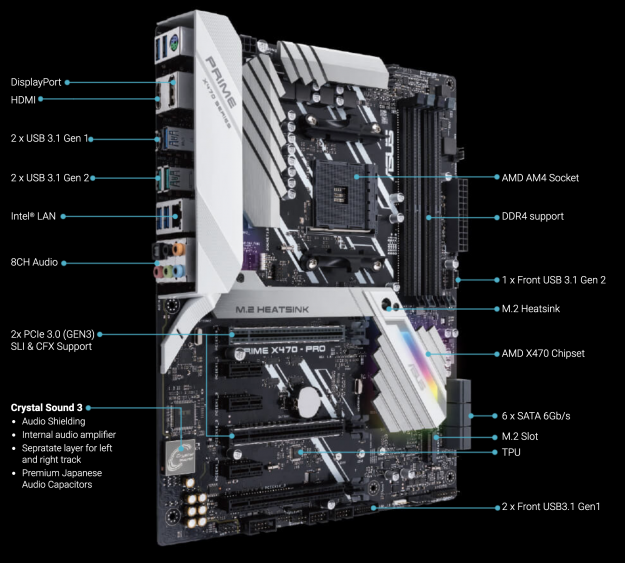 Okay, so the decision wasn’t quite so superficial. The truth is I like the combination of ports on the Asus better than those on the Gigabyte. Look at all those USBs! Most are USB 3.1 Gen 1, with two being Gen 2. There’s also a socket for two USB 3.1 ports on the case. And there’s a PS/2 socket: I’m not going to be playing the kinds of games where n-key rollover is important, but the PS/2 does appeal to the nostalgic side of me.

And the ‘way it looks’ decision has some substance to it. As we say in the aviation world, ‘If it looks right, it’ll fly right’. The Asus exudes quality.

That impression was reinforced when the motherboard actually arrived. This is a high-class product. I won’t go through the full specifications because you can read those on the Asus website.

Some of the things that felt relevant to me, though, were (in no particular order):

Other features of the board that Asus feels moved to mention are Crystal Sound 3 (do I care?) with “sepratate [sic] layer for left and right” and “Premium Japanese Audio Capacitors” (is that important? Do they need the capital letters?). It has eight-channel sound (I’ll be using two, thanks) and HDMI and DisplayPort video out, neither of which are any good to me because the processor I’ve chosen doesn’t have built-in graphics.

It does have one-click tuning for easy overclocking, which I might explore at some point, plus simple but highly configurable control of up to five fans (CPU, CPU Opt and three ‘chassis’ fans), support for water cooling pumps (no thanks), a 12V RGB header (which will be used for the Wraith cooler on the CPU) and even some glowing RGB LED panels, if that floats your boat. (It amused me for the first five minutes.)

Like I said, there are two M.2 slots, both capable of accepting NVMe SSD drives (and probably some other stuff – I want to use them for SSDs so didn’t investigate further). Asus makes a big fuss about the fact that one of these slots has its own heatsink. In fact, ‘M.2 HEATSINK’ is even printed on to the metal. This is an aluminium bar held with two screws. On the back is heatsink compound under a peel-off cover.

But, you’ll notice, it’s only one of the slots that has this much ballyhooed feature. The other one? Pah! That can look after itself.

You know what I think? I think that the heatsinked (heatsunk?) slot actually needs this cooling because it’s close to the CPU. So the designers thought, “Dammit, we’re going to have to add a heatsink to help the poor little guy out.” And then a moment later: “You know what? We’ll boast about this heatsink. We’ll make it front and centre of our marketing literature. People will think they’re getting something special.”

Asus wouldn’t be the first company to turn a necessity into a ‘feature’.

As I write this, I’ve fitted the X470-Pro motherboard into my chosen case, even though I haven’t yet received my CPU.

At first, it wasn’t going to be this way. I figured that fitting the CPU – or to be more precise, its heatsink – would be easier with the board outside the case. It’s going to involve removing some brackets on the board while ensuring a metal plate, which I presume also provides heatsinking, remains in position on the underside of the board.

Then it occurred to me that the case has a cutout precisely where this plate lives, so I chose to mount the board now.

I’m glad I did. There were a few operations that I think would have been close to impossible with the heatsink in place. These included one of the motherboard mounting screws that was hard enough to get to as it was. Also, connecting up the cable for the secondary (eight-pin) ATX power supply was fiddly. With the processor and heatsink installed there’s no way I could have done it.

The Asus Prime X470-Pro comes with two SATA cables, one with a right-angle connector that’s of no use to me. I bought some nice, colourful cables from Amazon.

The covering plate for the ports was the one part of the kit that seemed a little flimsy and cheap to me. It was a struggle to clip it into place. The rear face, where it butts up against the motherboard, is padded, presumably to avoid scratches. But that’s the only good thing to say about it. But hey, it works.

The user guide, though, is excellent. It lays out clearly what you need to do in terms of connecting other stuff to the board.

So that’s progress. Now for some memory.