This was the second purchase for this build, after the case, and is seriously over-specced. But that’s how I like my power supplies.

At the time of purchase, I wasn’t really sure what direction this build would take. I ruled out a 450W power supply unit (PSU) as being too limiting. I figured a 650W one would more than do it and an 850W model would be overkill. So I bought the 1000W PSU – the EVGA 1000GQ Gold, to be precise.

Why not? The machine will use as much power as it needs, no more. Having some in reserve makes this a future-proof(-ish) purchase.

I also knew I wanted a modular PSU. For those, like me, whose knowledge of PC innards is still stuck in the 1990s, modular PSUs have sockets into which you plug the power cables you need – no more and no less.

They contrast with non-modular ones – the kind with which I’m familiar from an earlier age of PCs – where the PSU comes with a Spaghetti Monster-like rat’s nest of captive cables. If there’s a cable you don’t need, tough – you’ll just have to tuck it out of the way somewhere. Don’t have enough connectors? You’ll have to buy an adapter. 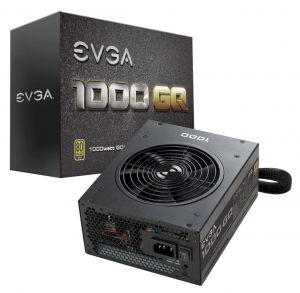 I’d seen good reviews of EVGA gear, so figured I couldn’t go wrong with that brand. And when browsing the models the firm offers, I continuously upsold myself, which is how I settled on the 1000GQ Gold.

It’s technically semi-modular. The main ATX power cable for the motherboard is captive – which is fine because we know we’re going to be needing that.

There’s a dizzying array of sockets. There are two 12V EPS/ATX sockets for 4- and 8-pin cables to provide additional power to the motherboard (I’m using one of these). Then there are six ‘VGA’ sockets for powering GPUs (and probably other stuff I’m not aware of). I’m using one of these. Next come three SATA power connectors, of which I’m currently using two and could conceivably make use of the third. Finally, there’s a 4-pin Molex for undefined peripherals (such as water pumps) and another Molex designated ‘FDD’. Yes, that’s floppy disk drive. Colour me surprised.

The supplied cables, of which there are many, are well made and chunky. No skimping on copper here. The main motherboard power cable, wrapped in a braided shroud, is especially beefy and very stiff, making routing a slight challenge.

The SATA cables each have four connectors. I’m not entirely happy with the way in which these are oriented. With vertically stacked drives, like you’d find in regular bays, they’ll be fine. But for the two 2.5in drives (one SSD, one HDD) that I currently have mounted vertically in the case, the cables are a little awkward. 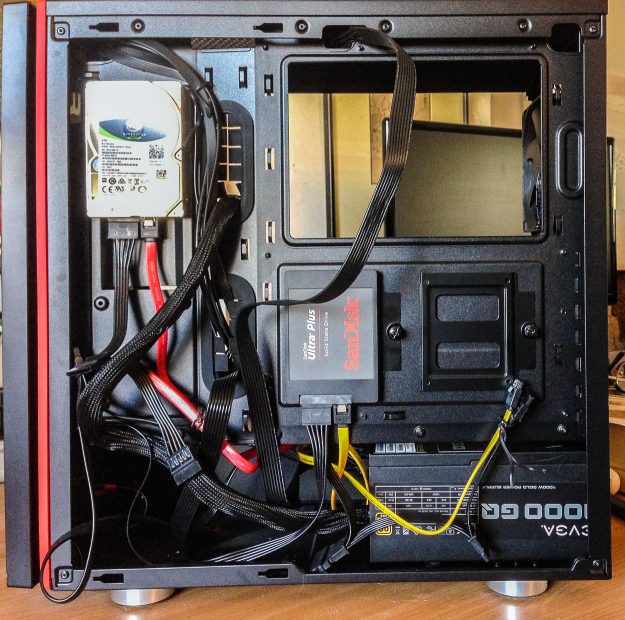 The SATA cables are a slight challenge.

In the lower right of the picture above you can see the black SATA power cables next to the yellow data ones. In this instance, I’ve used the first connector on the cable for the SSD. The last connector is twist-tied to a tie point in case it’s needed later. The two connectors in between are unusable, but at least they tuck out of the way reasonably neatly. (No real cable management has been done on this yet, by the way.)

At the top left is the HDD. This is using the last connector on the second SATA cable. I’m hoping the first connector will work with the HDD mounting position directly below. But in between are two connectors that are no good for anything and want to stick out sideways where they will foul on the side panel when I try to close up. They also naturally want to sit on top of any HDD I put there. As it is, the 4TB HDD I currently have is quite high and only just clears the case. So I’m not sure yet how this is going to work out.

Whatever happens, it’s going to involve some awkward bending of the cable and maybe some Kapton tape.

The EVGA 1000GQ Gold does have one final feature – an ‘Eco’ switch. When engaged, this spins up the fan only when necessary. When off, the fan runs constantly. I’n not clear on why you’d want this – I have it set to Eco.

So there you have it – lots of power available. Now I just need to start adding stuff that needs power.