Nostalgia ain’t what it used to be – it’s a lot better.

Once upon a time, examining the past relied heavily on memory – an unreliable witness at best. Maybe you could dredge up a few old magazines and books, some dusty photos and a few other artefacts. But you were mostly dependent on whatever you’d personally kept from the era you were hoping to relive.

Now we have the hive mind – the Internet. We have outsourced our memory, in the shape of archives like the Wayback Machine. And people share their collections and recollections, building a richer and more accurate collective memory.

I’m discussing this for two reasons. One is that I found an old, dusty photo that spurred a bout of nostalgia. And the other is that this is the 200th post on this blog, so it felt like a good moment to take a look back – and forward. 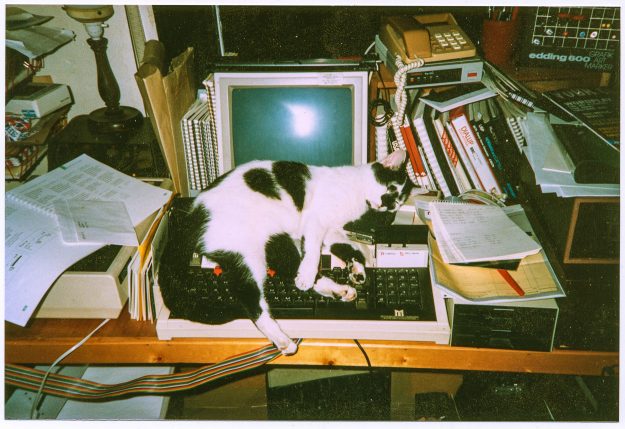 So what can we see in the picture, apart from the cat and a lot of dust and scratches? (Click on the picture for a bigger version.)

Actually, let’s not discount the cat too soon. That’s Worthing, a feline of fine distinction who ran my life for many years. As you can see, she enjoyed sleeping on my BBC Master Turbo, presumably because it was warm. She’s resting her head on an Olympus Pearlcorder dictation tape recorder. Other than as a source of warmth, she didn’t approve of computers. A few years later, my NEC EGA monitor would blow up because of her habit of sleeping on top of it and shedding fur.

I used the Beeb for both play and work (as a journalist). I’ve never been into games much, my interest in computers being based almost solely around programming, which is why the Beeb has a monochrome, green-screen monitor attached. I didn’t buy it. I … um … ‘inherited’ it from my days working on MSX Computing magazine. 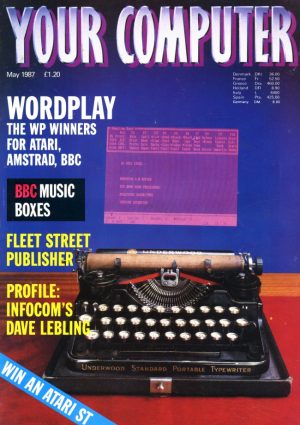 Disappearing from the top-right edge of the photo is a copy of Your Computer magazine, then edited by a friend of mine and to which I regularly contributed reviews. A Google search (that hive mind) turned up a cover image. It turns out to be the May 1987 issue, which therefore dates this photo.

I think I wrote that review of Fleet Street Publisher. And the typewriter featured on the cover is mine – and yup, I still have it.

Cover price of the magazine was £1.20. Those were the days…

Plugged into the Beeb is a ROM cartridge containing, in socket A, something called ‘OverView’ – presumably a companion ROM to Acorn’s View word processor, but I have no memory of it. In slot B is Basic Editor, a program that transformed my life, making programming several orders of magnitude easier.

Behind that cartridge is another, bigger, black cartridge. This has a ribbon cable coming out of it and going to another box. This was a product called Genie that provided Sidekick-like utilities such as diary, notebook etc with the data being held in its own, battery-backed RAM. Here’s a news story I wrote about it in the May ’87 issue of Acorn User: 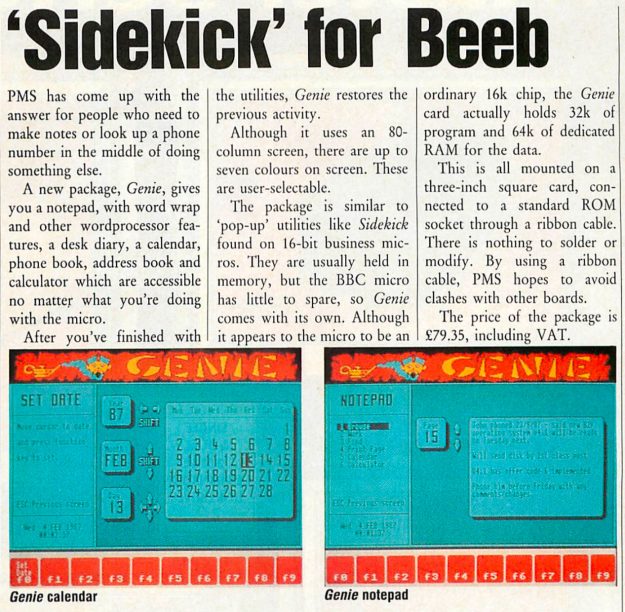 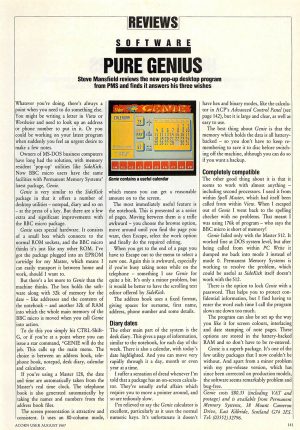 I wrote a fuller review, too, which appeared in the Aug ’87 issue. (Click on the image for a bigger version.) From the review it’s pretty clear that I’m already a regular user of an IBM PC-compatible (as we used to call ’em) because of the comparisons to Sidekick. I can’t recall where I kept the PC at that time, but soon after this picture was taken, a PC clone (as we also used to call ’em) would take the place of this Beeb as my primary writing machine. It hadn’t happened sooner only because I was working for Acorn User.

I don’t have any fond memories of my first PCs, for a couple of reasons. I found them dull compared to eight-bit micros. And I never held on to one for long. As a writer for various PC-oriented magazines, I never bought my own machine. Instead, I’d blag a loaner from a manufacturer and use that until a better one came along. So my early PC days are a blur of XT, 286 (AT) and 386 machines – at least a dozen different models and brands within a few years. It was quite some time before I actually bought a PC.

Back to the picture … to the right is a dual, 5.25in, double-sided, 80-track floppy drive. No hard drive back then. Behind the drives are various books and manuals including: Acornsoft Lisp (still have this), Acornsoft Micro-Prolog (I’d like to own this manual again, if you have one), Acornsoft BCPL (never got very far with that), and Usage & Abusage, which has nothing to do with computers but was in the library of every self-respecting journalist back then. I still have that, too.

To the left of the monitor are all the manuals for the likes of View, ViewSheet etc. By Worthing’s tail are the quick reference guides for the software, plus a ROM cartridge and a floppy. And to the left of those is the Epson MX-80 F/T III printer which, miraculously, I still own and have recently brought back to life. 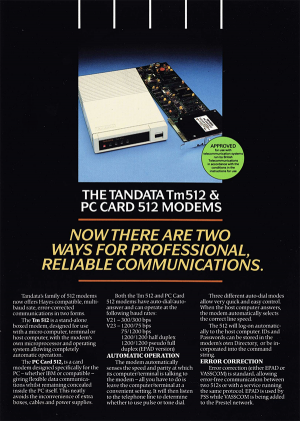 Tandata Tm 512 ad from the period. Click for PDF.

Towards the top-right, there’s my phone sitting on top of a Tandata Tm 512 modem. That was the first push-button phone I ever owned. It cost a fortune (about £70 which, trust me, was a lot of money then) but I had to have it. Going online back then meant dialling up a bulletin board system (BBS) which, because the number of simultaneous connections was equal to the number of phone lines the operator had installed (commonly one) was usually busy. Not only did push buttons make dialling easier than on finger-abrading rotary phones, this model had that most glorious of all inventions – last number redial.

The modem wasn’t mine. At the time this picture was taken I was deputy editor of Acorn User magazine and we were part of a trial of a messaging system aimed at schools. This was clever in the way that it addressed a major concern of all educational institutions – budget.

Dialling up online systems back then could ramp up huge phone bills, as my bank manager would tell you if he were still mentally competent. With this system, whose name I’ve forgotten, any emails you wrote would be stored on your local machine. The system would then call you overnight (when calls were cheaper), pick up your outgoing messages and deliver any incoming ones, which meant you needed a modem capable of auto-answering. This approach meant the school wasn’t paying for the calls and the whole system was a fixed-price item on the budget. It failed.

The little black book in front of the modem contained phone numbers. Nope, not for women. They were numbers of BBS systems and ‘interesting’ computers.

So much for looking back. What about going forward?

I seem to have a lot of projects on the go and am making little headway with any of them. There’s Sheldon the robot. My serial-to-parallel interface for dot matrix printers. The Zolatron 6502-based micro, and more.

Things have been busy lately, not least because I was putting together a book.

I still don’t have a lot of free time, but here’s what I’m going to do. I’m going to focus on one project and pursue it until it gets to a proper milestone. Then I’ll either plough on to another milestone or switch to another project and ensure progress with that before switching again. That way I’ll have something to show for my efforts. Stay tuned…