It’s time for a new PC, although it’s also hard to say why. For some reason, I find myself with a hankering for a Windows box, and maybe one capable of playing games. Which is odd, because I don’t play games.

My current Windows 10 ‘box’ is a virtual machine running under VMWare Fusion on my iMac. I have it mostly to run Atmel Studio for AVR-related development, plus some FPGA- and BBC Micro-related tools. Which is fine. It means I can work at my normal workstation without switching to another machine. The trouble is that, just lately, restoring a paused VM takes an age – at least 10 minutes. The VMWare forums are full of people complaining and a deafening silence from VMWare about the problem. Once it’s running, it’s fine. But, of course, being a VM and thus sharing the resources of the host machine, it ain’t fast. For software development, it’s perfectly adequate, but I’m in the mood for a bit more grunt. 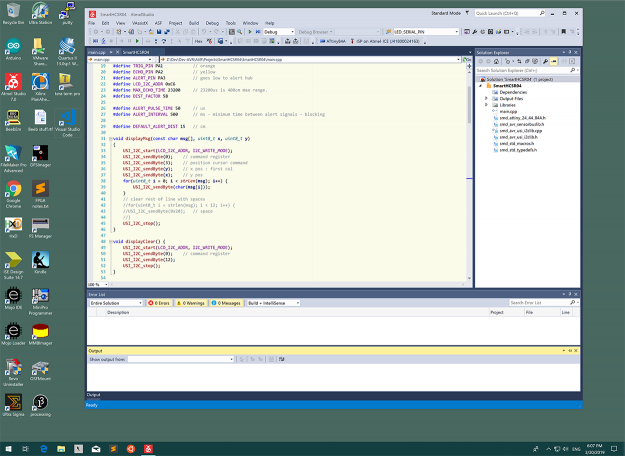 I also have a cheap Lenovo laptop running Windows 7, but let’s gloss over that for the sake of my self-respect. I also have an old Dell with a fresh install of Windows XP, but that hardly counts.

So why a new PC? The rationalisation I’ve come to – and the business case I will present to my More Significant Other, if pressed – is that I would like a reasonably powerful machine on which to run various databases and hacker-type stuff, partly for work. There are also a few games I would like to explore, such as Elite: Dangerous. And I’d like to be able to run a Windows machine without waiting an age for it to boot and stealing resources from my iMac.

The unofficial explanation is that building one’s own PC just seems like a fun thing to do.

I do, of course, use the term ‘building’ loosely. Putting together a PC these days is more a process of assembling. There’s so much standardisation and stuff that just works. Yet I’m sure I’ll hit a few glitches along the way, which is why I’ve started this series of posts.

Although I’ve used the words ‘grunt’ and ‘powerful’ already in this post, this is not going to be the ultimate gaming machine. Not even close. I haven’t got several thousands of euros to drop on this. In fact, I’m having to save up and buy one component a month. So many of the components may prove to be modest.

Having done some research, I have a broad idea of where I’m heading – AMD Ryzen processor, X470 motherboard, NVMe SSD for the OS drive and so on. Precise details will be made up as I go, depending on whim and budget available. For this reason, for example, I’m leaving the precise choice of CPU almost to last.

This is going to be a modern PC, but there is a slight sense of nostalgia to this. My life used to revolve around PCs. From somewhere in the 1980s right through a big chunk of the 1990s, most of my work as a freelance journalist consisted of reviewing PCs. My home was always piled with boxes of the bastards. I once complained to my (now) wife that “my life is all about cables”.

I usually had a couple of PCs on ‘long-term loan’ from vendors. It was rare for these to have their cases screwed on because I was always upgrading them with parts taken from review machines. Few PR companies would notice if a machine came to me with 16MB of RAM and went back with 8MB, or a smaller hard drive, or a different sound card. It was all part of the game back then.

Building my personal FrankenPC involved a lot of time delving into the innards of computers – and also hours of tearful rage involving driver floppies, jumpers and IRQ settings. From what I hear, it’s not like that anymore. Let’s see…