There are three things that are certain in life – death, taxes and blown capacitors in old electronic equipment. But at least you can do something about the last one.

Powering up a 35 year-old computer that has sat in a loft for the past two decades is foolish. But we did it anyway. The BBC Master ran fine for maybe a minute before we were greeted with the traditional spluttering noise and a cloud of magic smoke. 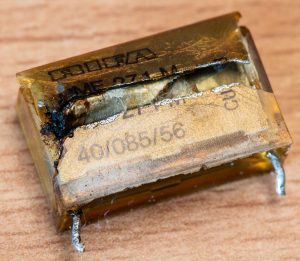 As usual, it was the film filter capacitor that had let go. These things are notorious for drying out. I’ve recently replaced identical capacitors on a sewing machine belonging to SWMBO and my Epson MX-80 F/T III printer, both of a similar vintage to the BBC Master.

Richard, who generously donated the motherboard from his now-dead Master so that I could bring mine back to life also left behind the blown power supply. I figured I’d have a go at restoring it  – doesn’t hurt to have a spare PSU hanging about. I’ll just replace the blown cap, I thought, and maybe a couple of others for good measure.

On the high side

I ordered a capacitor kit from RetroClinic, which includes replacements for the two film capacitors on the high-voltage AC side of the PSU, plus a 220µF 50V electrolytic cap that lives nearby. 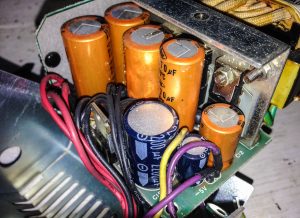 So many capacitors. And this isn’t all of them. The right-most orange one is the one I destroyed removing it to check its value.

However, while waiting for this to arrive, I got to thinking about all the other electrolytics. And there’s a lot of them. On the AC side there are two 100µF 250V caps. And on the low-voltage DC side there are no fewer than seven capacitors.

None of these caps had any obvious problem. But electrolytics do go bad. They can dry out and blow up, much as the film capacitor had. They can leak. And even where there is no obvious sign of trouble, they can stop doing their job properly. They just get old and start developing higher than tolerable levels of effective series resistance (ESR). Roughly speaking, capacitors block DC current and allow through AC unimpeded. But over time, they start letting through more and more DC, at which point they act as though they are resistors (hence the effective in the term ESR). 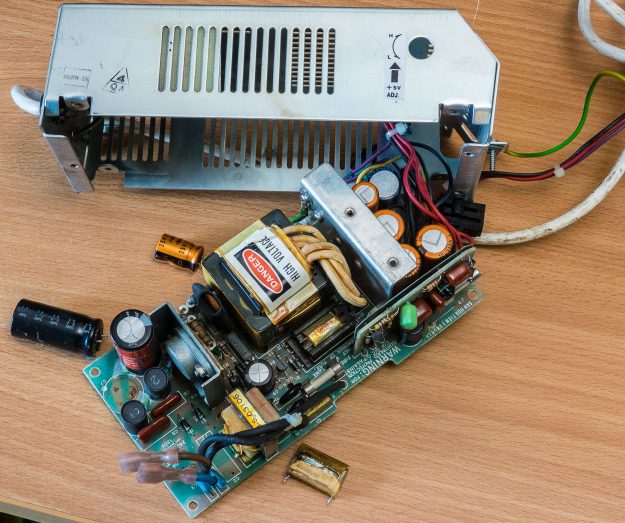 While I viewed the idea of replacing that many caps with a little trepidation, I decided to order replacements for them all. Even if I didn’t get around to actually replacing them all (spoiler alert: I didn’t) there’s no harm in having a collection of spare caps. I couldn’t see the value of one cap on the DC side so decided to remove it – accidentally destroying it in the process. It turned out to be a 220µF 25V and now definitely had to be replaced!

I also removed one of the two 100µF 250V caps on the AC side – not easy because it had been hot glued into place – and found residue showing that it was leaking. So both of those 100µF caps went on to the replacement list. 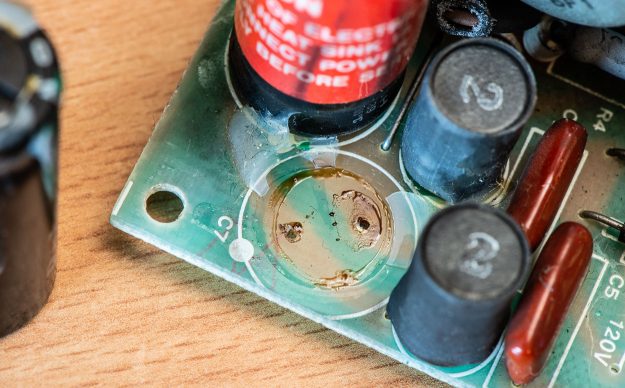 The residue left after removing one of the 100µF 250V caps. Nasty!

BTW, before I removed anything I took the precaution of taking lots of pictures with my cellphone showing the location and orientation of the caps. Unlike the Epson MX-80 circuit board, the Acorn power supply showed no immediately obvious markings for the + and – connections for the capacitors. 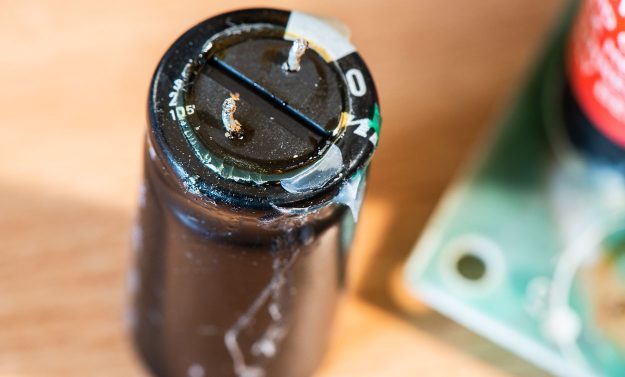 Once I started working, I realised there were white dots on the component outlines that show where the positive lead should attach.

When they arrived the first thing that struck me (not for the first time) was that modern capacitors are much smaller than their equivalents of 35 years ago. I’d neglected to check the physical dimensions, but I think they’re all going to fit.

I decided my plan of action would be to replace the caps on the high voltage side first (and the one I’d destroyed on the DC side) and then see what the output was like.

PLEASE NOTE: This project involved working with a device that uses mains voltage. You need to be very careful when dealing with mains current – it can kill you. I’m a complete chicken when it comes to mains – in fact, I get squeamish with anything much above 12V. So I was very careful. If you do something like this, you should be too.

I replaced both film caps, the two 100µF 250V electrolytics, the 220µF 50V electrolytic and the accidentally buggered 220µF 25V. None of that was very hard.

I double-checked that I’d put the caps in the right way around (the film caps aren’t polarised, so they don’t matter), that all the caps were the correct ratings and that all solder joints were good with no bridges. Then I stuffed the PSU back inside its metal cage, made sure nothing was touching anything it shouldn’t, plugged in and switched on.

The lights went out.

Literally. The main circuit breaker for the house had tripped. Even I could work out that something wasn’t right.

With the PSU unplugged, I started probing to see if there were any obvious shorts, particularly on the mains side of the board. I especially wanted to know if the live or neutral was shorted to earth somewhere.

Checking the resistance between the incoming live and neutral lines showed no obvious fault: the resistance started in the megaohms and rose rapidly as the current from the meter probes charged the capacitor. So I started rooting around elsewhere.

Checking components in-circuit is always tricky because it’s difficult to eliminate the effects of other components in parallel. For example, a cloud of suspicion fell over a ceramic disc capacitor (C8) connected to the big transistor that’s mounted to a large heatsink. In-circuit, this cap registered as a dead short. Once out of the circuit, however, it tested fine.

I haven’t yet been able to find a schematic for the power supply, so that didn’t help.

I hit the Stardot forums to see if anyone had any ideas. They had lots of ideas, but alas nothing that turned out to be relevant.

Meanwhile, back at the Master’s PSU, I was still probing around. Not having an isolation transformer (which I definitely want, but, you know, money) means I couldn’t test actual voltages on a plugged-in board. This was severely limiting my ability to find the fault.

I mean, I could just try something, plug in the PSU and throw the switch. But having the power for the house fail time after time would most likely upset my More Significant Other. And jewellery is expensive.

A couple of people on Stardot had suggestions for setting up a test rig that would involve an incandescent bulb as a way of preventing the blackouts. But it seemed like a lot of effort just to repair an old PSU that is destined to be a probably-never-used backup.

I began to have dark suspicions that, when the capacitor blew, it may have taken something else with it. Even if it didn’t, I’m still dealing with a 30+ year-old device that, even if it doesn’t have issues now, is likely to get them in the near future. I’ve also run into the limits of my skill and knowledge in diagnosing PSU faults.

While replacing and testing components, I did manage to lift a few traces. These didn’t cause problems in themselves, but it was just another reminder that I was dealing with old and not especially robust hardware. Throw into this mix my aversion to dealing with mains-powered circuits and I was starting to think this was a project not worth pursuing.

On the other hand… 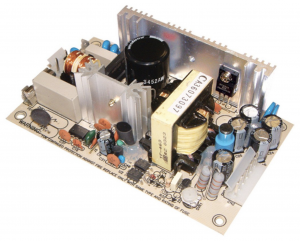 While cruising the Stardot forum I learned of the existence of the Mean Well PT-65A switching power supply. This is a (nearly) drop-in replacement for the BBC Micro or BBC Master PSU because it has +12V, +5V and -5V outputs. You need to wire it up yourself and find a way of attaching it inside the Beeb’s PSU shielding, but none of that is very difficult and there’s a good guide here.

On the blog post linked above you can download 3D printer (STL) files for brackets needed to mount the Mean Well inside the Beeb’s PSU housing. Not having a 3D printer, I used Sculpteo to get these made.

This wasn’t a cheap option. But aside from saving me the trouble of bodging something together myself (although I don’t think that would have been hard), I’m curious about the whole 3D printing thing and wanted to give it a go. I can’t see me ever justifying the purchase of a 3D printer – hell, I can’t even justify the expense of an inkjet printer for my photography because the running costs are just too extortionate. But being able to get designs printed by a service like this makes a lot more sense – just like getting PCBs fabbed.

But then again… €20 for a couple of small bits of plastic is not good value to my mind. I can officially state that my curiosity is satisfied and that’s not something I need to do again.

A couple of other notes about the instructions on that site. The recommended supplier for some of the parts was Distrilec. I ended up waiting weeks for the firm to fulfil the order, with no explanation why.

Pay careful attention to some of the quantities, too. I didn’t, and am now in possession of more multi-strand cable than I could use in two lifetimes.

Also, the author blithely mentions in passing that, if you use the recommended crimp connectors, which you probably should, you’re going to need an appropriate crimping tool. I’d somehow missed that note. When the time came to make up the PSU, I found myself falling at almost the first hurdle.

A trip to Ebay and another six-week wait resulted in me being the proud owner of ratcheted crimping pliers. They’re not cheap: I paid CAD$32.95. (And yes, I’m in France, the seller’s in Hong Kong, so don’t ask me why it was billed in Canuck pesos.) But that’s a lot cheaper than real professional tools that fetch hundreds, sometimes over a thousand, dollars even secondhand. And they work fine.

So, once finally and properly prepared, putting together the new power supply was quick and easy. The one I currently have in my BBC Master was refurbished before I bought the machine, so this new one is just a back-up. But it’s good to know it’s there, that’s it’s brand new and that it’s not harbouring any further grudges against me.