My BBC Master micro is alive again, thanks to a generous donation. So what was wrong with it before?

Buggered if I know.

The Beeb suddenly developed a fault a couple of years ago. On powering on, it would show the OS greeting and sometimes the disk filing system greeting but would then hang. I tried a few things but, being busy, finally wrapped the old dear in a plastic bag and stored her on top of the wardrobe.

Recently, though, a fine chap called Richard, with whom I already had some happy acquaintance, offered to bring over his Master (from the UK, no less) to see if swapping parts might help hone in on the problem.

Richard’s machine hadn’t been switched on for 18 years. And it was rather unusual. He’d adapted it, back in the day, to sit inside a Viglen housing, which meant that the keyboard was now in a separate box. So the first step was to get everything plugged in. We powered up and – it worked. The backup battery was probably dead, and the keyboard was a little reluctant (probably dust) but it went into Basic easily enough. But old hands will know what’s coming next.

Remember that thing about 18 years?

Yup. Crackle, hiss and lots of smoke. A capacitor in the power supply let go. And yes – before anyone starts screaming, we really should have considered recapping the PSU first, but hey ho. It’s all part of the fun.

Next, we turned on my machine. If you’re feeling nervous, don’t worry. My BBC Master was refurbished by RetroClinic and has already been recapped. We poked around a bit with the multimeter and scope, noting, for example, that the clock signal at the 65C12 processor (and the 5V supply, for that matter) was really quite noisy. But there was no obvious candidate for our troubles.

Two of the custom Acorn chips on my machine are socketed. In the case of one (IC15) it has clearly once been soldered because there was solder remaining on all the legs of the chip. I presume this chip had been replaced during refurbishment. It was, therefore, one of my prime suspects. I’d hoped that we could swap with the chips from Richard’s Master, but his were directly soldered to the PCB.

Then Richard had the excellent idea of swapping the motherboards. We did and … I have a working Master again. Still with no idea what the problem was with the old one. (It might go off to RetroClinic for repair.) But at least we’d ruled out problems with things like the MOS chip.

We probed around a bit again, noting that the clock signal was just as noisy – although that isn’t necessarily surprising given we’re using the same power supply.

Then Richard made my day by telling me he would donate the motherboard. And it didn’t stop there, because he’d arrived with several boxes. When he left, my BBC Master was enriched with a dual 3.5in disk drive, two Acorn ROM cartridges, a Viglen cartridge system, several software ROMs, including the MEGA3 (InterWord, InterSheet and Interbase) and a stack of manuals. 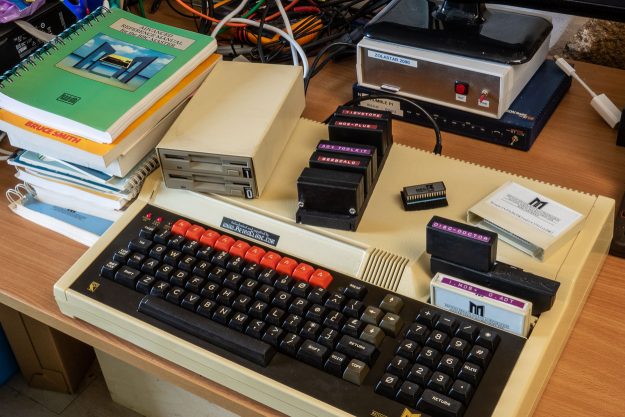 When I had my original Master I also had a couple of the Acorn cartridges. They were such a handy way of swapping in and out ROMs, although I mostly did this by loading sideways ROM images. When I bought my current Master three years ago I looked around on eBay for these cartridges, without much luck. So it’s great to have these again. The Viglen cartridge system, though, was new to me. 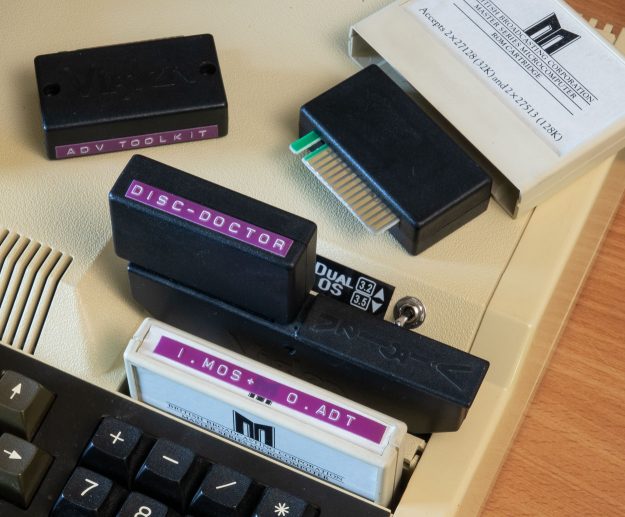 I also kept the blown PSU from Richard’s machine to see if I can repair it. Always useful to have a spare.

So a huge thank you to Richard, and get ready for some more BBC content on this blog.

Oh, and Richard mentioned he has a BBC Micro Model B he’s happy to donate. That too hasn’t been switched on for 18 years. And yes, I will think about recapping it first…