In many ways this is Part 5 of my four-part series on SMD soldering because it addresses problems I had with reflow soldering and TSSOP ICs.

When I used reflow soldering, I tended to end up with solder bridges. In one case it was just a single bridge that was easily fixed with the quick application of my soldering iron. And I do have suspicions about my solder paste. Nonetheless, it was frustrating. And then, while playing around in the KiCad EDA, I started to wonder if there was another contributory factor.

To help with soldering – especially when using solder paste – you generally want a line of solder mask, known as a solder mask dam, between the pads to which you’ll be attaching the pins. 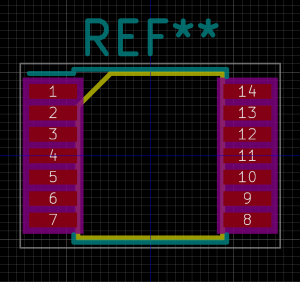 In KiCad, the standard footprint for TSSOP-14 packages with a 0.65mm pin pitch has pads that are 0.45mm wide. That leaves 0.2mm between the pads, which I think is running tolerances rather tight.

That’s because not all of this space is filled with solder mask. Fab houses create ‘apertures’ in the mask to give access to the pads and these gaps will be slightly larger than the pad size in order to avoid any issues with misalignment. This additional area is known as the mask relief.

The mask dam has to squeeze between not just the pads but also the mask relief. So that 0.2mm gets trimmed down very slightly.

If you look at Seeed’s PCB Fusion service, you’ll see that the standard minimum size for a solder mask dam is 0.4mm. You can opt for 0.1mm, but for a lot more money. So that minimum size is already double what we have available, even without considering the mask relief.

JLCPCB, where I had the boards fabbed, doesn’t specify a minimum dam size. And peering through the magnifier I can see that there is, indeed, solder mask between the pads (it’s not so obvious in the photo). This is with their cheapest board options, so well done them. 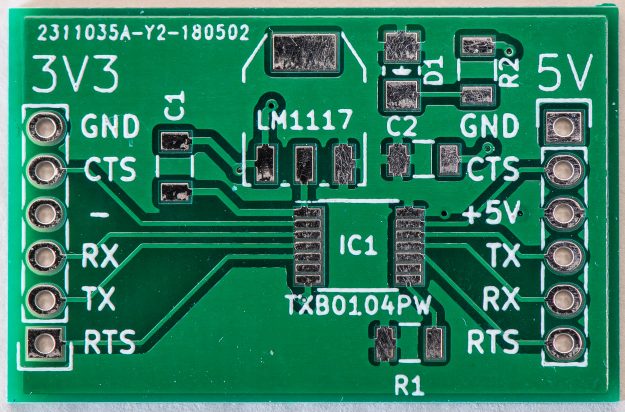 Nevertheless, the amount of mask is extremely small and so I have to wonder how well it’s doing its job.

So I decided to experiment.

I created a version 1.1 of the board, adding two LEDs attached to the TX and RX lines because, well, blinkenlights. And I modified the TSSOP-14 footprint, reducing the pad width to 0.35mm. This is only a bit wider than the pins themselves (0.3mm), but increases the solder mask dam width by about 50%.

Having pads not much bigger than the pin width presents its own challenges. Alignment of the part is far more critical. That could make hand soldering an issue. But my reason for trying this is to get more reliable results when reflow soldering in the oven. My hope was that the magic auto-alignment phenomenon of reflow soldering would overcome the problem.

The revised PCBs arrived and I tried reflow soldering them in the oven. So how did that go?

Well, in both cases I still got bridges – three on the first try and two on the second where I’d reduced the line of solder to a mere trickle. With my current techniques, I simply can’t reduce the amount of solder paste any more.

However … fixing the bridges was a doddle – much easier than on the first version of the board. Dragging outwards with a fine-tipped soldering iron did the job in a jiffy. (Or should that be giffy?)