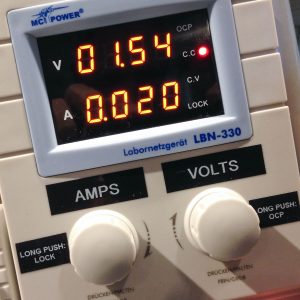 The PCBs arrived from the fab house and I was impatient to try them out.

They’re nothing clever – just a way of saving a bit of wiring for my ESP8266-based IoT room thermometer. Aside from headers, there are just four components (not including the pullup resistor I don’t need anymore because I made a mistake).

I hand-soldered on the three 1206 SMD resistors and one 1206 SMD capacitor and added all the DuPont-style headers. I also soldered on female headers to make the Adafruit Huzzah ESP8266 board socketable. That’s because I already have an updated version of this board on its way so didn’t want to commit the Huzzah by soldering it. Finally, I wired up the sensor and LCD screen.

Then it was time to power up. I carefully set the bench power supply to 5V and plugged in.

Well, not quite nothing. There was a brief flash from the LCD screen’s backlight.

Of course, my immediate assumption was that I’d made a terrible mistake in the PCB design.

So out came the multimeter and I started buzzing things out. Everything seemed to lead to where it should go. Maybe my soldering was at fault. Aha! A solder bridge. I really had been in a bit of a hurry. But the bridge was just between pins 2 and 15 of the Huzzah which shouldn’t have affected anything.

Then I noticed that when I connected power, the voltage from the bench power supply dropped to around 1.5V. Huh? There had to be a short, or something like that…

So several more minutes of fruitlessly buzzing out connections.

And at last my eyes returned to the power supply. With the power connected, the current limiting (constant current) LED was lit.

A couple of days ago I’d set the limit to 20mA while playing around with some LEDs. So I boosted the limit to 0.5A and … it worked!

So – always check your settings.

This is the first in an occasional new series of (mostly) short posts. The idea is to share my experiences of things that stumped me for a moment before I realised I’d made a basic mistake. Other titles I considered for this series were: ‘Doh!’, ‘Something stupid I did today’ and ‘Things that make old-timers roll their eyes’. Maybe it’ll be of help to others and stop them doing the same dumb thing.