Ah, there’s nothing quite like the feel of a fresh, crisp OS install. It’s just that the OS I’ve just installed is Windows XP. Now that makes no sense…

As I’m now playing with my BBC Master again, I felt the need for a Windows machine to have alongside it. There’s a bunch of utilities that run only on Windoze, such as the HxD hex editor, and MMBImager and FS Manager for handling BBC Micro disk images. But I haven’t used Windows as a daily driver OS for a very long time. (One day I’ll tell the story of why I ditched Windows and went first to Linux and then back into the loving embrace of the Mac – but right now the memory’s still too raw.)

And yes, I actually do have a Win 7 laptop hanging around the place. But that’s on my electronics workbench for doing stuff like running a logic analyser or looking up datasheets. And I have a Win 10 VM running on my iMac – but that’s clear across the other side of the office from the BBC Master.

Nope, I decided to go for a real-world Windows XP install because:

The Dell had a copy of Ubuntu on the hard disk, but a long-neglected version.

The first install CD I tried was actually an upgrade disc. I must have bought it back when I upgraded from Win 98. When I tried running it, it complained about not being able to find any kind of Windows installation on the hard drive. So much for that. 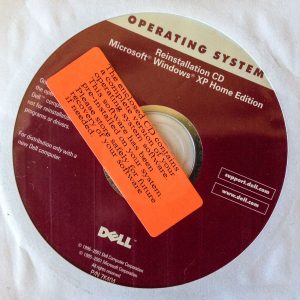 Then my eye was caught by a stack of Dell CDs. These were the ‘restore’ discs that used to come with Dell machines and contained copies of all the pre-installed software – including the OS – in case something went horribly wrong.

I have a vague recollection of trying to use these CDs in the past to install Windows. This failed because the PC wasn’t a Dell. Or something. The details are murky. But I figured, hey, this one is a Dell – not the one the disc was intended for, but what the hell.

So, in it went. I went into the BIOS settings so that the PC booted from the CD. The installation program noted that the hard disk had three partitions (these would have been /, SWAP and /home under Linux) but made it a simple matter to erase these and create a single partition from the whole 80GB drive.

And then Windows XP installed perfectly, just like that.

Just kidding. I got the Blue Screen of Death, with the message (which I now know to be notorious) of ‘IRQL_NOT_LESS_OR_EQUAL’. Googling around I found lots of explanations, but two seemed most credible – that XP won’t install on a machine with more than 2GB of RAM (mine has 3GB) and that this message is always associated with BIOS settings.

So, reboot, F12, back into the BIOS. This actually has an ‘OS install’ option that limits RAM to 256MB purely for the purpose of installing an OS. Changing that alone didn’t do the job, however. I tried tweaking all kinds of settings – mostly those relating to extra performance features – until the thing stopped BSODing. It turned out the magic incantation was to turn off multi-core support. The Dell’s processor is a 2GHz Pentium Duo.

Finally, Windows installed. Naturally it wanted a reboot, so I did that but interrupted the process to go back into the BIOS and turn on all the memory again.

This time I had a clue as to the problem. The PC configuration (ie, the amount of memory) had changed and Windows did not like that, not one little bit. So I rebooted into Safe Mode, then rebooted again normally and all was well.

Windows XP was installed and running, but the network card wasn’t working and Device Manager showed a large number of other non-functioning items.

And here’s where I blessed Dell – not something I do lightly or easily. A quick trip to its support website (on my iMac. naturally) and I had all the drivers I needed.

So there it was – an Internet-connected Windows XP machine with not even Service Pack 1, Internet Explorer 6 and no anti-virus. What could possibly go wrong? 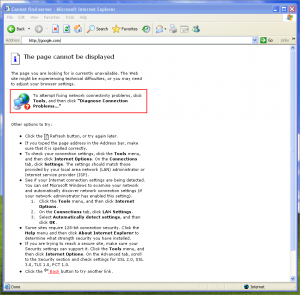 Because I like to live dangerously, I tried browsing a few websites. Most didn’t work – I mean, at all. In fact, I first thought I was getting a DNS error of some kind. I’d earlier used the terminal to ping 8.8.8.8 (Google’s DNS server) to check I had an Internet connection, but when I typed ‘google.com’ in the address bar I got the infamous ‘This page cannot be displayed’ error. That sounds like a DNS domain lookup failure, right?

Then, pretty much by accident, I discovered that Bing worked, but Google still didn’t. One of my websites worked, but another – hosted in a sub-directory on the same domain – didn’t. And then I saw that the Bing page started with ‘http://’.

The penny finally dropped – it wasn’t a DNS problem, it was a TLS problem. Internet Exploder was barfing on anything HTTPS. Google enforces TLS which, apparently, Bing doesn’t. The website of mine that didn’t work (the one you’re on now) bounces any HTTP connections to HTTPS. All I had to do was get rid of Internet Explorer 6 (no problem) and replace it with something from the modern world.

I make my living in information security and I knew that what I had was akin to a jamjar full of nitro. Sooner or later it was going to blow my head off.

So it was time to install some Service Packs. The most recent for Win XP is SP3, from a decade ago, but you can’t go straight to that. You have to have at least SP1 installed first. I found both SP1 and SP3 downloadable from Softonic. I think this is a safe site (but, just to be careful, this PC is sitting on a different subnet from the rest of my computers).

Once I was up to SP3 level I installed the dreadfully named but really quite usable K-Meleon browser (and uninstalled Internet Explorer and Windows Messenger).

And then I braced myself and instructed Windows to check for updates. I was expecting my broadband connection to be clogged for days.

There was one update. And it was small.

[UPDATE: I spoke too soon. When I came to turn off the machine, it said: ‘Installing update 1 of 131…’ I left the room at that point.]

Even with SP3, this machine is still a trojan magnet, but I promise to be careful. At least I have a fully working Windows machine next to my BBC.

A couple of final notes, though. This OEM copy of Windows required no user setup and no authentication. It installed without me having to enter a product code and just gave me a username of ‘owner’. That’s nice.

In spite on being on a machine originally sold with Vista, the screen redrawing is dreadful. I’ll see if the video drivers from the Dell drivers site help. And now I’m on SP3, I’ll see if turning on multi-core support now works.

Finally I rather like the postmodern feel of my desk now. There’s a Minitel terminal, a CP/M machine (well, okay, an FPGA replica of one), a Power Macintosh G3, an Apple PowerBook 3400c, the Beeb and the PC

The BBC Micro first appeared in 1981, with the Master joining it in 1986. Windows XP appeared in 2001, with my copy dating from 2002. The Dell machine I’m running it on was built in 2009 (and originally equipped with Windows Vista, so putting XP on it is a mercy). I was there at every step … which is really making me feel old.