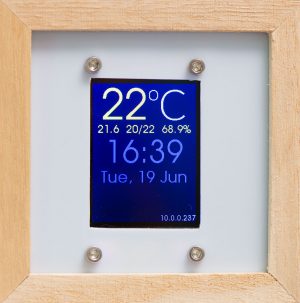 The best projects are the ones you finish. And as projects go, this IoT room thermometer – and, for good measure, clock – was one of the easier ones.

To recap, I wanted a thermometer in my office to measure the temperature and compare that with how I’m doing, at any given time, in terms of hand pain. I have osteoarthritis and it does seem to be worse when the temperature drops.

I could have just bought a digital thermometer – in fact I did – but I also wanted an excuse to play with ESP8266 boards. Up to this point I’d done very little with the boards in my collection.

As I detailed in the first post, I selected the DHT22 temperature and humidity sensor and a small TFT LCD screen. And to simplify wiring, I created a very basic PCB that carried the ESP8266 board (a Huzzah board from Adafruit) plus a couple of pull-up resistors for the reset buttons, a current limiting resistor for the LCD backlight and header pins for all the various connections.

In the second post, I talked about how the device gets the time and date from a web server on my local network (a Raspberry Pi, as it happens) and also regularly reports the temperature and humidity readings to that server. I may have the server alert me in some way if the temperature drops too low – say, below 15ºC.

All that was left to do was to put the project in some sort of box. So far, I’ve made two. The first, with the earlier version of the PCB, lives in my office. This has just one reset button that I can use to reboot the ESP8266. That’s handy if the wifi connection has gone a little squonky. 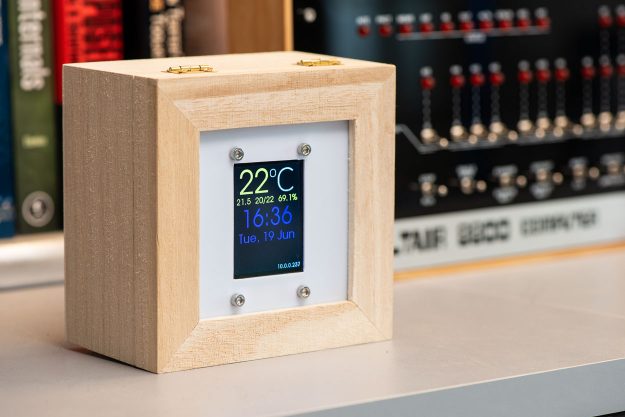 Thermometer in my office

The second copy has an additional reset button that simply resets the min/max temperature readings. This now sits on the wife’s desk in the living room. 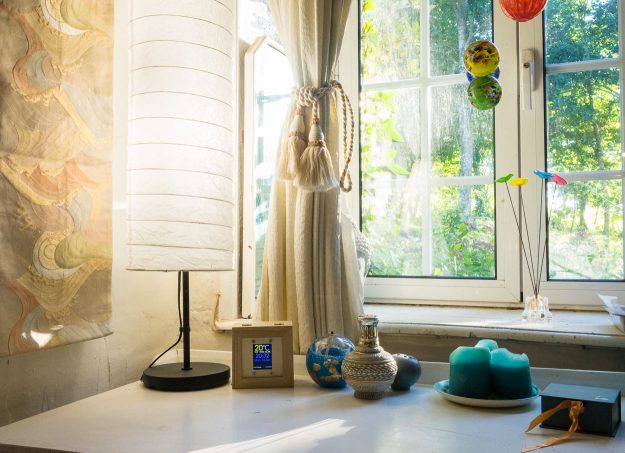 The thermometer on the wife’s desk. 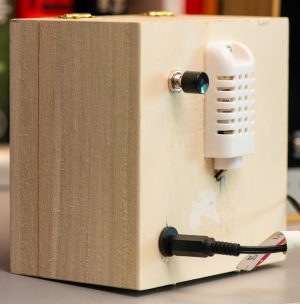 Sensor and reset button on the rear. This is the first version with just the one reset button.

The box is a combined storage container and picture frame bought from a chain store called Action which sells cheap household stuff. I think it cost just a couple of euros. Being made of wood, it was easy to drill and I could screw the sensor to the back easily.

For the first one, I mounted the LCD panel in a piece of 3mm thick plasticard. I’d intended to use the backing plate that you’re meant to put behind your photo. This is a thin piece of wood, so easily worked – but I cut the hole the wrong size. (Remember kids – measure twice, cut once.) For the second one I tried again with the wood panel and it worked.

The box is actually quite deep, meaning that there’s a lot of empty space inside. But I haven’t ruled out an update sometime with a lithium battery pack and one of those charger/boost boards. But that’s definitely a project for another day. For now, I’m calling this project finished.