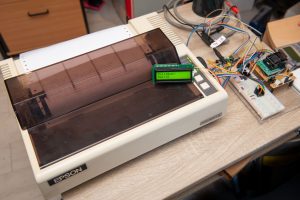 The DottyMatrix project began when I thought, ‘It would be nice to make use of my old Epson MX-80 F/T III dot matrix printer’. The problem was talking to it. But then I thought, ‘It’s just parallel printer interface. I’ll make a microcontroller-based device to act as an interface. How hard can that be?’.

The answer, it turns out, is not all that hard. It’s all gone pretty well so far.

But then things start to snowball.

I’m not going to go into intricate detail here – you can read all the gory detail in other posts – but I thought it would be fun to list all the technologies already involved in this not-yet-finished project.

What I’m calling ‘technologies’ are in bold. Software packages are in italics. (The distinction is a bit arbitrary at times, but go with it.)

To create the schematic and board design I’m using KiCad running under macOS on my x86-based iMac. To program the AVR microcontroller I’m using Atmel Studio programming in C++ and running under Windows 10 in a virtual machine (thanks to VMWare Fusion) on the same iMac.

The board itself talks to an LCD screen using I2C.

To talk to the board via serial, I use CoolTerm on the Mac.

The idea, however, is not to talk directly to the board via a terminal, so I’ve started on the next phase.

I have an ARM-based Raspberry Pi running Linux (Raspbian) on which I’m running a web server using Apache, HTML and PHP. The pages also use JavaScript (jQuery, Bootstrap) to query a PHP-based Ajax server which in turn interacts with Python scripts.

That’s quite a lot of technology just to print “Hello world”.