If you’re working with solder paste, as I was in the last post, there’s an easier method of applying heat than blasting the PCB with a hot air gun. And that’s to put it in the oven.

This is how most commercial soldering is done these days. But this reflow soldering is easy to do at a hobby level, too.

Let’s just say up front that you shouldn’t just pop your PCB into your everyday oven. Solder paste can give off some highly toxic fumes and the most popular types (among hobbyists) contain lead. You don’t want that stuff working its way into your roast chicken. It’s better to buy a cheap mini-oven and dedicate that to your soldering work.

You could try simply heating up a mini-oven, slinging in your board and hoping for the best. And you’ll find plenty of blog posts and videos about people reflow soldering in frying pans, on skillets, hotplates, even on clothes irons. This can work fine, but you’re probably always skating on the edge of disaster. So let’s look instead for a better solution – one geared specifically to the task in hand.

The reason it’s a good idea to be a little more discerning about this process is that the heating process in reflow soldering is done in stages: 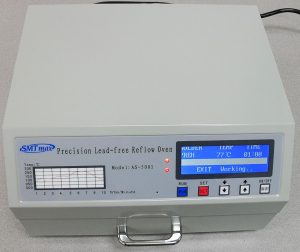 There’s much debate about a particular soldering oven of Chinese origin. It seems to be available badged under various brands and for a range of prices, starting at around $280, give or take, and going up to about $500. (These may be slightly different models – the designations T-962 and AS-5001 seem to be common. I gave up on this line of enquiry so my grasp might be slightly shaky.) Some people say it’s great. Some say it’s rubbish. Some say it’s fine so long as you make various modifications (including reflashing the firmware). It seemed like an awful lot of effort to go to.

I went another way. 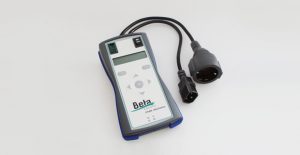 The solution that made most sense to me was from Beta Layout. It uses an ordinary mini-oven and an external microprocessor-driven reflow controller. Both oven and controller are available together in a kit with lots of additional accessories, or you can buy the bits separately as I did.

One important aspect of this solution was that it was a relatively easy sell to my More Significant Other. While she would have no use for a specialised reflow soldering oven, she can, apparently, make use of a mini-oven for some craft-related, um, stuff. I think beads and buttons were mentioned, I’m not sure. But anyway, the mini-oven achieved multi-purpose status and therefore was approved in the household budget. 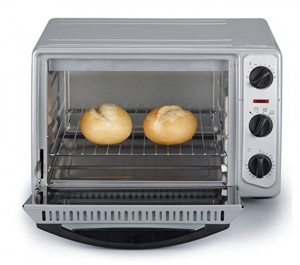 I saw the Beta device on an EEVBlog video. The one Dave Jones looked at was the older version (the video is a few years old now). The controller has since been updated and is even easier to use, with a handy LCD screen showing the oven temperature (no need for a separate multimeter).

I bought the controller and a bunch of accessories directly from Beta but got the oven (a Severin 2045, a slightly updated version of the one Beta sells in its kit) from Amazon. That’s because the Beta kit contains several items I didn’t need or want; getting only the items I needed from them and the oven from Amazon saved me about €40. The 1500W oven cost €60 and has a 20-litre capacity. I wouldn’t go for anything larger than that because heating all that extra air is unnecessary and inefficient. I don’t know if smaller ovens might work – I briefly considered a 9L model but thought it might be a little underpowered – you need a bit of grunt to get from the soak phase to the reflow phase as quickly as possible.

The controller needs to learn the characteristics of the oven. The way the system works is that you put a temperature thermocouple sensor (the same kind you use with multimeters) in the oven attached to a circuit board – preferably one that has similar characteristics to the boards you’ll be soldering, but I don’t think it’s critical. I used a piece of prototyping board. The main thing is that the thermocouple should be in contact with the board so it’s measuring PCB temperature, not air temperature. You can just feed the wire from the sensor out through the door of the oven (no modifications are required to the oven at all).

In the EEVBlog video, Dave Jones initially had some problems with uneven heating. With the help of viewers, he eventually narrowed this down to resting the PCB on the standard grille-like shelf in the oven. He solved this by putting the PCB on top of a piece of copper board. I went for something simpler. I removed the grille entirely and replaced it in the centre slot of the oven with the supplied crumb tray. This is solid metal and so is more likely to have a reasonably even temperature at all points. But being fairly thin, it should heat up and cool down quite quickly. I put it in upside down because that makes the main area of the tray slightly recessed.

You plug the oven’s mains supply into the controller which then simply turns the oven on and off. But the controller can’t turn off the oven when it reaches the right temperature because residual heat in the elements would make it overshoot.

So the first time you use the controller, you put it into ‘learn’ mode. It then works out how your oven behaves and stores that in non-volatile memory.

The controller can store up to five different soldering profiles. You can also hook it up to a computer via USB and either interrogate or control the system via commands. All you need is a serial terminal, so this will work with any type of computer – Windows, Mac, Linux, PDP-8, HAL…

You could even script commands, so it’s a very versatile system. I plan to have a spare Raspberry Pi connected to it at all times. I can then SSH to the Pi and monitor soldering operations from my office.

Having put the Beta solution through the learning cycle I decided to give it a try. This was before I decided to write this series of posts, so it was using a different board. The board contained a variety of component sizes – 1812 resistors, 1206 capacitors, a SOT-23 regulator, a SOIC-16 IC (74HC595 shift register) and a TSSOP-20 IC (the TXB0108, the eight-channel version of the level shifter I’m using in this series).

My first couple of attempts were a mixed bag. Everything other than the TSSOP IC was fine. Perfect, in fact. I couldn’t have been more pleased and, as far as I’m concerned, the Beta controller & oven setup worked flawlessly. The process also took only a few minutes – I don’t know how many exactly because I have the setup in an attic room, not my office, so I wasn’t watching over it.

But in both these attempts, the TSSOP chip had multiple solder bridges – I mean, really beautifully soldered bridges. What’s more, the bridges were deep under the legs, where they join the body of the package. Try as I might, I couldn’t fix these bridges with a hot air gun, desoldering braid or a fine-tipped soldering iron.

You’ll read online that you don’t have to be too careful with the solder paste when it comes to ICs – just run the paste along the pads and let surface tension and the solder mask sort it out. Don’t believe it. When you have these very fine-pitched components you need to be really careful how much paste you apply – with the right amount being hardly any at all. (See my previous post for more on this.)

The TSSOP chips have a 0.65mm pin pitch and 0.3mm pin width. That’s about as small as I’m likely to go, but I really want to be able to use devices in this kind of package. For example, I’m planning to use the AVR ATMEGA328PB which comes in a TQFP package with the only slightly more forgiving specs of 0.3mm pin width and 0.8mm pin pitch.

I was applying the paste with a compressed air-driven syringe. On the second attempt I tried using the finest needle in my collection, but the paste refused to come through. So I used the second-finest needle and still got the bridges.

With these first two boards, I applied the paste along the line of each pad – that is, at right angles to the body of the chip. This clearly results in far too much paste. 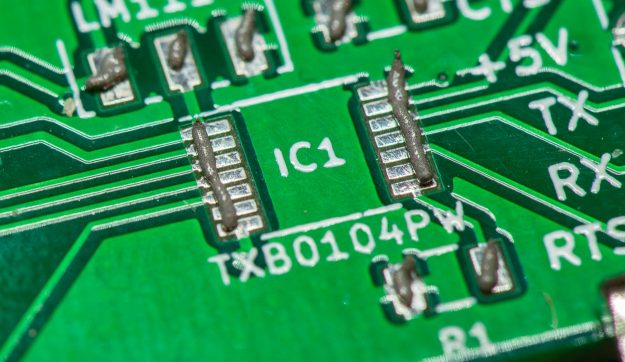 Far too much solder paste for the chip. The other components were fine.

When I came to write this series of posts, I went for the more conventional approach of putting a line of paste across the pads, as you can see in the picture above. This attempt resulted in four solder bridges. I was able to fix three with a combination of hot air gun and soldering iron. The fourth bridge (!) turned out not to be an issue because one of the pins involved isn’t used by the IC.

On my second attempt, I put on much less paste. This in itself was a struggle because with just tiny amounts coming out of the syringe’s needle, it wouldn’t stick to the PCB. I ended up using the tip of very fine-nosed tweezers to spread the paste. Compared to the effort in the picture, I probably used a third to a half as much paste. The result was a single solder bridge that was easily and quickly fixed with the soldering iron.

It’s possible the paste I’m using isn’t in tip-top condition or of the finest quality. I bought it cheap on eBay about six months ago and haven’t refrigerated it. So I’ll be trying again with some new paste soon.

Also, I have another theory about the issue here which I’ll be covering in a future post. Nonetheless, fiddling about with syringe and tweezers was rather time-consuming.

In the end, though, I counted this experience a success – both boards ended up functioning fine without huge amounts of rework. And the fact that the actual soldering process is push-button simple is very appealing: all the effort is in setting up.

I’ll sum up my experiences in the next post.