It was time to get serious about SMD soldering. And I have to say, I’m really pleased how well this has worked out so far.

Now that I’m getting into, and hugely enjoying, PCB design and getting boards fabbed, I can’t escape tackling SMD (or SMT if you prefer) components. And this is a good thing. For a start, an increasing number of components are now available only in surface mount form. And using SMD means your boards are smaller.

But I was reluctant to go down this road because of the osteoarthritis in my hands. The idea of handling such tiny devices was really off-putting. Turns out I needn’t have worried.

For a start, it is possible to hand-solder many, if not all, surface-mount components. With my (not entirely successful) parallel breakout board, I successfully hand-soldered a TXB0108 level shifter IC that came in a TSSOP package. That’s tiny, with extremely fine pins. But it’s do-able if you take your time and accept a certain level of frustration.

With devices such as resistors and capacitors, though, I wasn’t comfortable going below the 1206 package size. Even that could be very fiddly. And so I looked around for alternatives.

A lot of hot air

The first solution is to use air, and for two very different purposes.

So how do you heat it? There are various options, as we’ll see later, but my first choice was hot air.

I bought myself a hot air rework station. The Quick 861DW has got a lot of good reviews, including by Dave Jones over at the EEVBlog who tore one down and was very complimentary about the build quality. A hot air gun has a multitude of uses and so it’s good to have it on the bench anyway, but I specifically wanted it for SMD soldering.

My first couple of attempts were comical. I managed to dab some solder paste on the pads (not as easy as you’d think), stuck the components to it, grabbed the hot air gun and aimed.

Keeping the component in place with the tips of some tweezers seemed like a good idea. And it does work. The trouble is that when the flux melts, it becomes very slippery. If there’s any sideways force on the component at all, it will go sliding off.

I now have the following technique (which isn’t perfect yet, but I’m getting there): I do hold the component down with tweezers, but if possible I rest the tweezers on the board, rather than holding them, just letting the weight of the tweezers do the work. Then I bring the hot air gun in from directly above the piece, approaching the board slowly. This has had good results.

Alternatively, if I have to bring in the gun from the side for some reason, I don’t hold down the component, but just place the tweezers so that they block it from moving in the breeze.

The other challenge was getting the solder paste on the pads. It’s sticky stuff. If you try to paint it on with something like a toothpick, it just wants to adhere to the pick. It gets messy.

The paste I had was delivered in a syringe without a plunger, which is common if you search for solder paste on eBay. One of my favourite YouTubers, Julian Ilett, had some fun with this.

You should check out the follow-up videos, too. That’s how I learned that these syringes are meant to be use with compressed air systems. And that inevitably led me to this eBay superstar, a glue or solder paster dispenser that is designed to provide timed pulses of compressed air into the syringe. 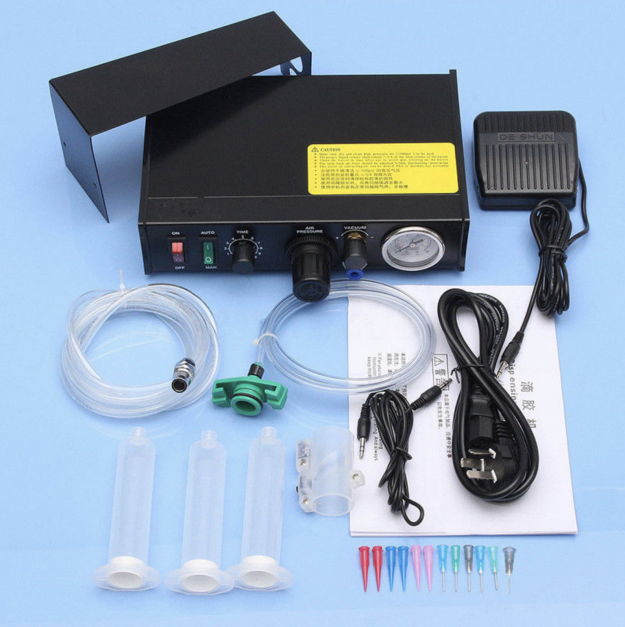 You can find reviews of these devices all over the interwebz. The general opinion is that they are cheap’n’cheerful – quite shoddily made but they do the job. In fact, I found that some aspects of the device are quite good; the case is solid, the main switches are very nice. But yes, some bits are also rather tacky.

For some bizarre reason, mine was delivered with what I think is an Australian plug. Having chopped that off, to fit a European plug, I found that the three cores in the mains cable are of a colour scheme I’ve not encountered before – one blue and two black. Fortunately, the connections are labelled on the ICE C13 plug (the kettle-style plug) that goes into the device and so I used my multimeter in continuity mode to buzz out the wires. 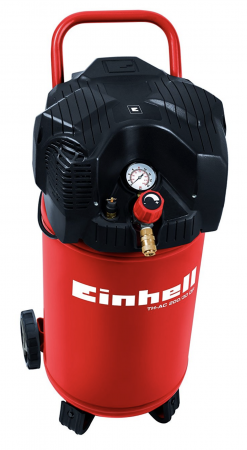 The tubes are push-fit, but lock in quite nicely. I also bought separately a pack of syringes of different sizes along with matching air hoses and fittings. And the needles should be regarded as disposable, so I got a bunch of them, too.

The next thing I needed was air. So that meant buying a compressor (this whole business really started to snowball). I found an Einhell compressor on Amazon that I reckoned was up to the job. But there were two problems with using it for pumping solder paste.

The first was noise. Compressors are notoriously loud. and this one is no exception. Even in the barn, as soon as you switch the damn thing on you !&#$)@*#$%}{@#&%$urself think. I was damn sure it would be unbearable in the confines of my office.

The other problem was weight. I want to be able to use the compressor for multiple functions around the place, such as inflating tyres on bikes, mower and trailer. That would mean regularly hauling it up and down the stairs to my office. And I’m not as young as I used to be. 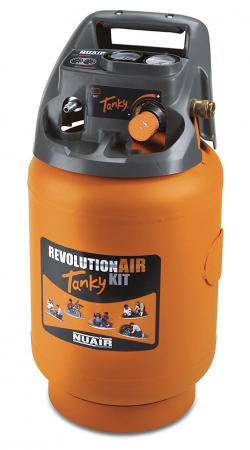 The solution was a separate air tank – the Revolution Air Tanky. I simply charge this with the compressor and take it to the office. It has its own regulator and gauge to control the output pressure. And it’s less than a third of the weight of the compressor. Based on initial tests, it’ll last me at least a full day’s worth of solder pasting. And it’s completely silent.

It took quite a lot of hunting to find a Euro adapter that would fit into the 4mm tube the dispenser uses. And even when I found it, getting it at a reasonable price was tricky. Suppliers wanted either to charge €20 for this small lump of metal (with some quoting up to €50), or would price it at €2-3 but then want €18 for delivery.

I found a couple of vendors with reasonable prices – one on eBay and the other on Amazon – but they mysteriously cancelled my orders about a week after I placed them. Finally, I found an Amazon reseller who would send it to me for around €8 including shipping.

When the adapter arrived, I cut off the one already attached to the tubing and then gently heated the end of the tube with the Quick hot air gun (see how many uses it has!) to soften the plastic slightly. This made inserting the adapter very easy. Hopefully, having cooled the plastic is now tight enough on the barbed adapter that it will take the 60psi (roughly) that I’m putting through the tubing. For good measure, I added a couple of cable ties. And the air tank is to the side of my workbench. If this tube lets go, there’s nothing for it to hit.

So, finally, I was set up. Would it work? Actually, it works beautifully. I’m tempted to say perfectly. With the air pressure at around 60psi, the dispenser on auto and set to level 7 on the timer (and ‘vacuum’ dialled out completely, because that’s really for using glue), each press of the foot pedal delivers about enough paste for one pin of a TSSOP package. Two taps gives you enough for the pad of a 1206 component, and three is right for slightly bigger stuff.

Fun in the oven

Now, I know what some of you are thinking. “For god’s sake man, put it in the oven!”

And yes, a reflow oven is in the cards. But that’s for another time.