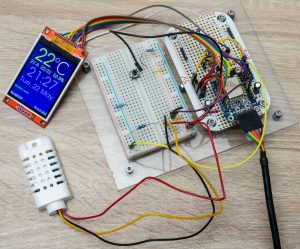 Having cobbled together an ESP8266 microcontroller, temperature sensor and TFT LCD screen, the next step was to have the device talk to a server.

There are two reasons for wanting to connect to a server: first, to get time and date updates; and second, to report the temperature and humidity so that the server can display them on an intranet web page and, maybe, log the data for later perusal.

And if you think that the initials MQTT are marching their way towards this post – well, they are, but only to be told to bugger off.

I have tinkered with MQTT. It is, after all, the protocol du jour for all things related to the Internet of Things (IoT). Indeed,  I’m half-way through a project in which I’m using an ESP8266 to control a bunch of neopixels in a wall light. The idea is to have a central server – actually, my Dawnclock – fade up the light in the morning.

That’s still a work in progress (I’m half-way through a lot of projects), but it taught me three things. First, MQTT is very easy to understand. Second, it’s reasonably easy to implement, although you do need specific server software running somewhere. And third, I found it difficult to get it to work with 100% reliability. More than a few messages would go missing.

For this temperature sensor project, MQTT seemed like overkill, to be honest. I already have an intranet server running (on a Raspberry Pi). It seemed much easier to use that.

Here’s a code fragment, so you can see what I mean.

The various functions that start ‘print…’ (such as printMsg()) are defined elsewhere and simply put messages or data on the TFT screen.

The HTTPClient class is very easy to use. Send a request and get back a payload, which in this case is the time or date suitably formatted and ready to throw up on the screen.

You can see how the code is simply interacting with a PHP script (iotServer.php) running on the server. I guess if you wanted to blow the whole thing out of proportion you could call this a REST API, but it’s hardly worth the name.

On the intranet server, the iotServer.php script saves the values to a text file. This is read by the web server when you visit the ‘IoT’ page and is displayed like this. 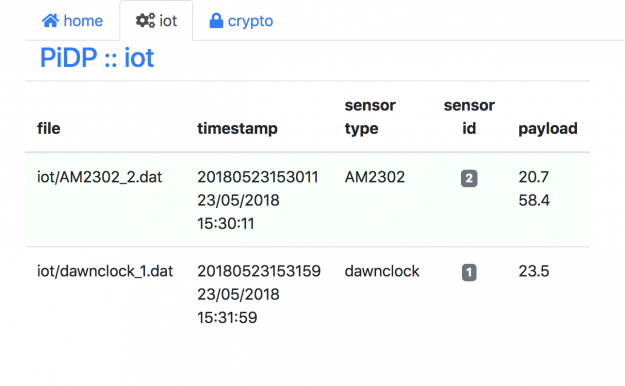 You can see I’m doing the same with the temperature sensor in the Dawnclock. I’m planning to add several sensors around the house.

After the last post, Richard P mentioned the idea of querying an NTP server to get the time, rather than the intranet web server.

I admit it had never occurred to me to use NTP. It’s an interesting idea and I started looking into it. A Beginner’s Guide to the ESP8266, available on GitHub, has a helpful chapter on how to access an NTP server for this very purpose.

In the end, though, I decided not to go this route (although I’ll bear it in mind for future projects). The reason is that’s it’s simply not necessary here.

Using the intranet server via HTTP allows me to adhere to an important principle – keep it simple.

Finally, I was going to talk about boxing up the device in this post. But as the PCBs haven’t arrived yet, that’s possibly a bit previous. So I’ll make one final post when the PCBs get here and I finish up the project.