My old, beloved Epson MX-80 F/T III dot matrix printer is back in the land of the living. For now.

As you can see from some of my earlier posts, I’m designing a serial-to-parallel interface with Centronics compatible DB25 connector so that I can print to my Epson from anything with a TTL serial port, such as a Raspberry Pi.

Alas, the Epson belched out a large quantity of smoke, accompanied by a crackling noise, some time ago. So the Epson has been the subject of a mild restoration. As part of this, I pulled out the circuit board and replaced three large caps. These are filter caps that are in the circuit right after rectifiers for the three different voltage levels the printer uses.

The weird thing, though, is that the caps looked fine. They even tested fine. And the slight smoke damage on the underside of the upper case looked more like it was above the transformer. 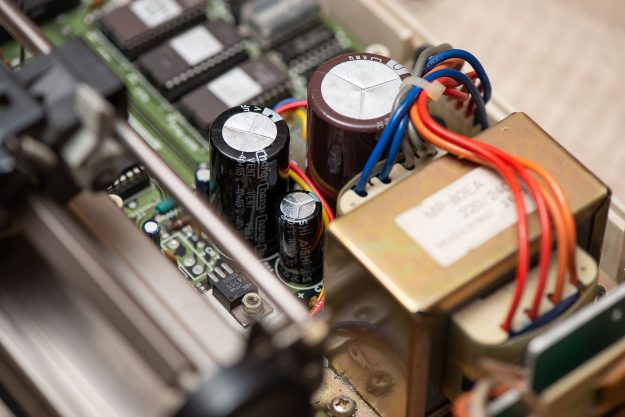 Oh well, replacing the caps is probably a good idea anyway. It was slightly trickier than expected because, when I came to solder in the new ones, I found that tracks had lifted in a couple of places from the PCB. Not sure why that is. I had to scrape back some solder mask to ensure I could solder the caps’ wires to the tracks.

With everything put back together I tried switching on. The Epson gave out its habitual initialisation chatter and the top panel lights suggested it was online and ready to print.

I decided to leave it switched on for a few hours while I was in the office. It was a little nerve-wracking, with me craning my neck around every now and then to check the house wasn’t on fire.

At one point there was a sudden crackling noise. I span around expecting a plume of smoke and found … Mini the cat nestling in bubble wrap.

Later, I had occasion to take the top off again and it was then I noticed some sticky residue inside the case. And it was close to yet another capacitor – one I hadn’t paid much attention to before. It’s a 0.1µF 250V filter cap on the mains input board. And although not blown apart, it looks decidedly unhealthy. I think I have finally found the source of the smoke. 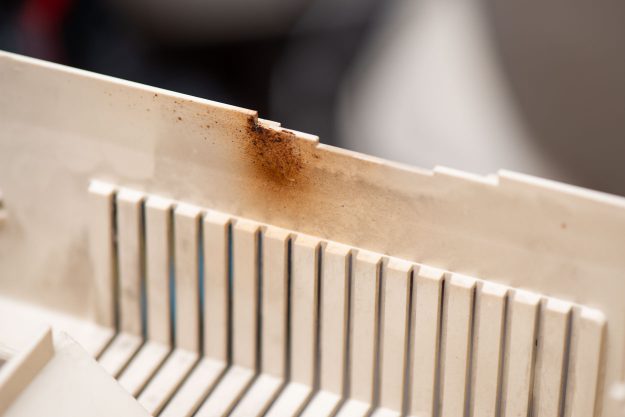 When I switch on the printer, although it works, it occasionally causes a nearby Windows laptop to beep. Clearly, the filter cap is no longer filtering. I have a replacement on order and won’t be trying the printer in anger until it arrives and is fitted. 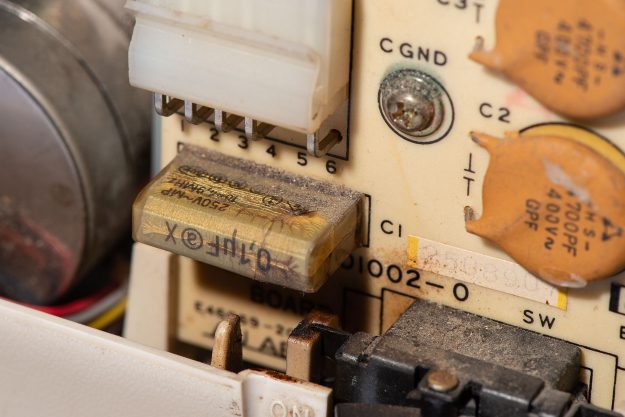 This still doesn’t explain the sooty discolouration above the transformer, but I’ve decided not to worry about that for now.

While the printer appears to be cooperating, though, I thought I’d check values on the connections to see if they’re what I’m expecting for my interface.

These are the values on the connector after the printer is powered-up and is showing itself to be online.

There was one surprise in that lot and a couple of interesting points.

I was surprised to find that the data lines are being held normally high by the printer. This doesn’t really change anything, but it’s worth knowing.

The Select line (an output from the printer) is a useful way of knowing when the printer is online or offline. But it was interesting to note that either a Paper End (PE) condition (ie, no paper in the printer) or the printer being taken offline will also cause the BUSY line to go high. In essence, you could enable the essential printing capabilities with just the data, /STROBE and BUSY lines.

I also took the opportunity to start sprucing up the Epson a little. As you can see from an earlier picture, it was rather grubby. That’s over 35 years’ worth of accumulated grime, plus the residue of a couple of stickers. One of those still had the old address of a mate of mine to whom I loaned the printer back in the 1980s. He’s still a mate, which says something about the bonding power of an Epson dot matrix printer.

Some isopropyl alcohol helped cut through the sticky and the labels were soon gone. I was also left feeling strangely happy if a little giddy. Time to open the windows and air the room, perhaps.

Having removed 30 year-old labels I found that the colour of the plastic it had masked wasn’t greatly different to the rest of the machine. This printer’s plastics haven’t suffered nearly as much yellowing as you might expect. Maybe they’re higher than usual quality. Anyway, I’m glad because I have no desire to mess with all that retrobrighting nonsense.

Once I have the replacement capacitor I’ll try hooking the printer up to my prototype interface. More soon…

[Update 23 /05/2018] I remembered that when I fixed the sewing machine belonging to my More Significant Other, the problem was a blown cap pretty much identical to the suspect in the Epson. The machine was of a similar age to my Epson.

And I never buy spare parts in quantities of one. So, instead of waiting for a Slow Boat from China to deliver the replacement cap, I just dug around in my parts bins. And there it was. 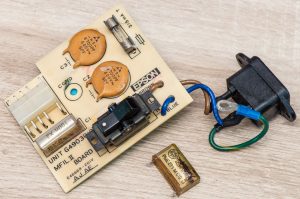 Power board with old capacitor removed and new one installed.

So I pulled the power input board from the printer. One of the things that has impressed me about this printer is how modular it is and how easy it is to get to everything. Just two screws – one holding the board to a heat sink and another attaching the earth cable to the metal chassis, and it pulled right out. The power sable socket was just wedged in place.

When I got to look at the underside of the suspect cap I was able to confirm that, yes indeed, this was the little bugger that had produced all that smoke. I now pronounce this printer fixed. 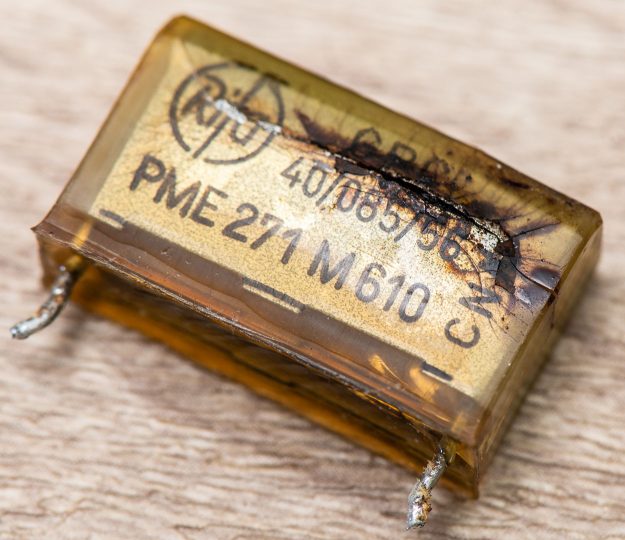 Now that’s what I call a blown capacitor.