In designing my DottyMatrix serial-to-parallel printer interface, I had to decide how it would handle the incoming data stream.

The purpose of the DottyMatrix is to connect my venerable Epson MX-80 F/T III dot matrix printer to (probably) a Raspberry Pi so that I can print out text files, such as program listings. Obviously, it would be good if it had additional applications, but that’s the main reason for doing it.

The way these interfaces would work, back in the day, is that the host computer would send data from its parallel port with the rate of data flow being governed by handshaking signals – principally, the /ACK and BUSY signals managed by the printer. Even an early 1980s microcomputer, such as my beloved BBC Micro, could spit out characters faster than the chuntering MX-80 could print them.

The manual for the Epson says that its interface is capable of handling 1,000 characters per second, but the maximum speed for the print head is 80 characters a second. The printer probably has some kind of buffer (I could find no reference to one in the manual, though), but it would be small.

In my setup, the Raspberry Pi will send data to the DottyMatrix over a 19,200 baud serial connection. I’m planning to use very basic handshaking in the form of a CTS (clear to send) line managed by the DottyMatrix. When this is high, it’s okay to send data; when it’s low, the RPi should wait and check again in a moment.

But how is that data to be packaged? It could just be in discrete lumps. The DottyMatrix code currently has a 255-character buffer, of which the final byte must always be a null (0).

I’ve opted for a line-oriented approach in which it’s assumed that each packet of data is one line of text. The MX-80 is an 80-character printer, or 132 characters in condensed mode. That means 254 characters should easily accommodate all the printable characters plus a healthy dose of non-printing control characters, such as those use to select underlining, bold etc.

The issue, though, is how to treat carriage returns and linefeeds.

We can trace the origins of these commands – and the fact that there’s two of them – to the typewriter. When you get to the end of the line when typing you press the return bar which does two things – it rolls the platen to advance the paper one line (linefeed, or LF); and if you keep the pressure on you push the carriage back over to the right, returning it to its starting position (carriage return, or CR). 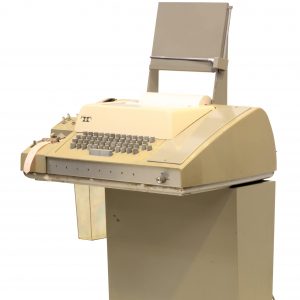 ASR-33 Teletype. On display at the Musée Bolo, EPFL, Lausanne.

This mechanism – suitably electrified – was carried over into one of the earliest computer peripherals, the teletype or teleprinter. This was basically an electric typewriter (often a modified IBM Selectric) that also interacted with the computer as well as printing the I/O session on paper.

Windows still shows this legacy, generally using both a carriage return (ASCII 13, or 0x0D) and a linefeed (10, or 0x0A) to designate the end of a line. But I started this project thinking purely in terms of a Raspberry Pi running Linux. And in the *nix world it’s common to use just a linefeed as the end-of-line designator.

I’ve coded serial comms routines before and have always used linefeeds as terminators because, in the context of what I was doing, it was convenient and effective. So this time I did the same without thinking.

But it needn’t be this way. I could just get the RPi to send the data in 254-byte lumps, with any carriage returns or linefeeds falling where they may. So one packet of data might be the end of one line and the beginning of the next. And this would continue until all the data is sent.

I went back and forth on this quite a bit but, in the end, came down in favour of the line-based approach. Partly this is because of some other applications I have in mind for this device.

In effect, the host is expected to send one line’s worth of text at a time. This string should be terminated with a null. If a carriage return and linefeed are wanted at the end of the line – which they mostly will be – the host should ensure the next-to-last byte is either a carriage return or a linefeed.

Why one or the other? Because of the way I decided to code this. Here’s a snippet.

We’re reading data from the serial port and putting each byte into a buffer. The buf_ready boolean is used to check whether we need to keep iterating. When it gets set to true, we stop reading bytes and the buffer is considered ready to print.

As soon as we encounter a null, a LF or a CR, we stop. But in the case of LF or CR, the other one is also added to the buffer.

The reason I’ve done it this way is that there’s no predicting whether the CR or the LF will come first, even assuming they’ve both been sent. This way I don’t have to keep track. Each LF is treated as a LF+CR and each CR is treated as a CR+LF. And both are treated as terminators.

Once the buffer is ready, any remaining data on the serial line is flushed. If the host has sent both a CR and LF (in that order), then the LF will still be in the serial buffer – and vice versa. Also, if the data has been sent programmatically, it’s likely to still have a null byte in the buffer.

This approach means that the null byte isn’t necessary. I can send data to the DottyMatrix from a terminal, turning it into a somewhat slow typewriter.

Anyway, it’s working, and I can always change the firmware later, so I’m happy with this approach for now.

4 thoughts on “DottyMatrix: ghost of the typewriter and the curse of the carriage return”