While hand soldering SMD/SMT components on to a PCB is certainly feasible, I figured there had to be a better way. That’s when I heard about using hot air rework stations to do the job.

The concept is simple: apply solder paste to the pads; place the components on the paste; apply hot air. The paste melts and effectively sucks the component into the right position. Job done.

By the way, many of the points I made in the previous post, about hand soldering, apply here too, as do the explanations of what this series is about. So I strongly recommend you read that post first.

The most obvious difference between soldering with a hot air gun and hand soldering is the use of solder paste. This is essentially minuscule balls of solder swimming in flux.

Somehow, you need to get this paste on to the pads of the PCB. I’ve seen video of people manually squeezing syringes and can only assume that they’ve thinned the paste first or have arms like Popeye. Certainly, the syringe of paste I bought off eBay wouldn’t submit to that kind of treatment. The paste has very high viscosity. I tried a plunger in the syringe and it just wouldn’t budge.

I’ve also seen people applying the paste with a toothpick. I don’t think that method merits any further discussion.

I chose to go the semi automated route. I’ve written about my compressed air setup before, so I won’t repeat it here. What I will say is that it works extremely well and I can recommend it. 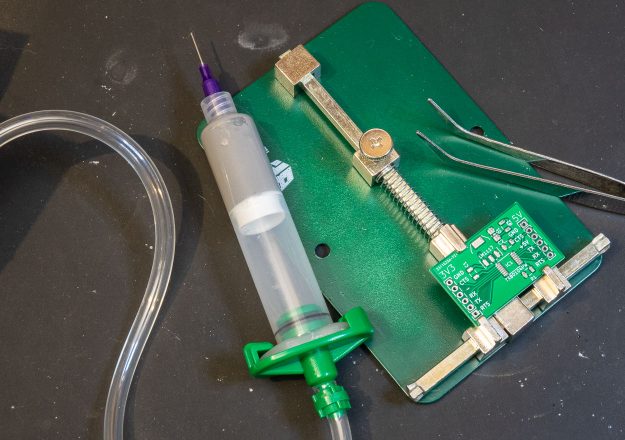 Getting ready to solder – the paste is in the syringe

One of the tricks is to use enough paste to stick down the part. If you ensure, for example, that both ends of an oblong part – such as a resistor or capacitor – are adhering to the paste there’s a much lower probability of the part ‘tombstoning’. That’s where it stands up on one end because the solder at that end has dragged at it while the solder at the other end had too weak a grip to stop it departing.

On the other hand, if you squish down the part too hard you won’t benefit so much from the auto-positioning effect. Working with hot air like this is a form of reflow soldering. And with reflow, as the solder melts a combination of the solder-repellant nature of the mask and the solder’s own surface tension means that the solder shrinks into position on the pad, dragging along any part attached to it. This has the tendency to correct any slight misalignment of the component.

As usual, the tricky part here is the TSSOP-14 IC. It has a 0.65mm pin pitch, which is really quite fine.

Now, I’ll make a confession: I did the soldering for the third part of this series before I did the board for this post and so I’d already learned some lessons about solder paste and TSSOP chips. You’ll read more about that in the next post, but suffice to say here that I already knew I had to be stingy. 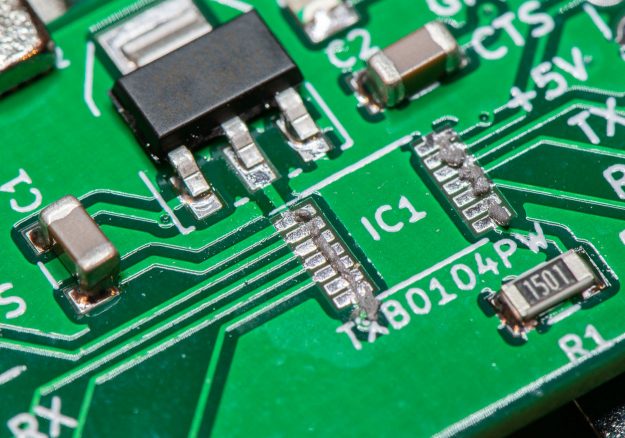 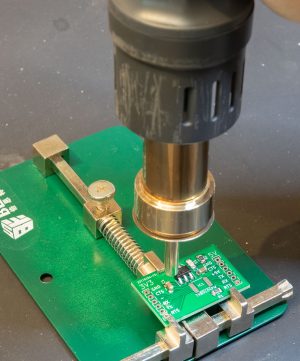 I soldered all the other components other than the IC first, with all of them on the board at the same time.

My technique is to hold the gun vertically and bring it down slowly from directly above the component. This means that, with small parts, both ends get heated together, which helps with the whole auto-positioning thing. With larger parts, I’d be tempted to use a larger nozzle, which is maybe what I should have done with the IC – but more of that in a moment.

Mostly, the parts positioned themselves fine. A couple were slightly off-centre, but not enough to worry about. On the whole, I’d say that the exercise was a success, and significantly faster than hand-soldering.

A bridge too far

But then it was time for the IC. I’d run the solder paste across the pads, as is the time-honoured fashion. In a couple of places I’d smeared it out with tweezers to make the line thinner. I should have done more of that.

The soldering took only a moment, but I could see straight away that I had solder bridges.

On the left, where the line of paste was thinner, everything was fine – no bridges at all. But on the other side it was virtually nothing but bridges. 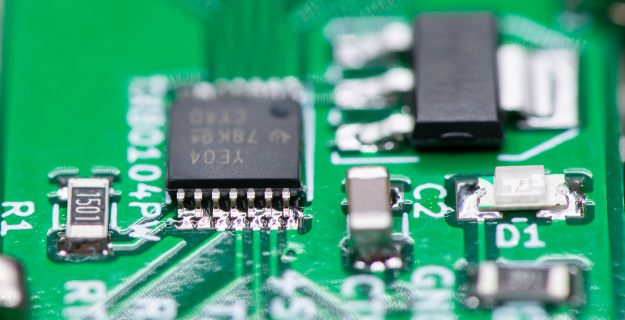 I got to work. I tried adding more flux and reflowing with the hot air gun. I tried dragging out with the tip of the soldering iron. I was so desperate that, a couple of times, I even tried desoldering braid. (Another confession: I’ve never had much success with desoldering braid. I think it’s a scam.)

I tried all of these things several times in various combinations. And I even managed to clear a couple of the bridges, only to have them join up again later. I guess I could have attempted a rescue with my solder pump or desoldering gun; but in the end my back was hurting from craning over this piece and I reckoned I’d learned enough.

Yet I couldn’t stop obsessing. So I had another go.

It didn’t get a picture but the amount of solder paste was about half, maybe a third, of the thicker line you see in the picture above. It took quite some time to get the right amount spread out with the tweezers. I wouldn’t want to have to do a lot of boards this way.

This time I soldered the IC first. I ended up with two minor solder bridges that were easily fixed with the iron.

The other components were slightly more fiddly. The LED blew out of position and one of the resistors skewed sideways. These problems were easily fixed, but it definitely wasn’t as plain sailing as the last time.

Maybe it’s because it was late and I was tired. (Friends don’t let friends solder sleepy.) But I was definitely having trouble with components adjacent to the one I was concentrating on getting blown out of place.

If we ignore the chip problem for a minute, I’d say it was a success. It’s an extremely fast method of soldering and results in a good finish.

But that solder bridge issue with the IC is something I need to work on. (More on that in the next part.) It meant I ended up with a non-working board the first time. And it is easy to blow components around the board if you’re not careful.

I can see me using this technique from time to time, but not as my go-to SMD soldering method. And that’s strange because I thought it would be my favourite.