A little while back, I wrote about my SMD soldering setup. It was very much an overview and mostly about the kit.

Now, I know many beginners, like me, are intimidated by soldering surface-mount parts. They’re so small and the pins on ICs are so close together. But there are good reasons for getting over the fear. Many parts are now available only in SMD (or SMT, if you prefer*) packages. And SMD is a good way to go if you’re creating your own PCBs because they save a lot of space and you can even mount them both sides of the board. Besides which, they look great.

There are plenty of tutorials out there, especially on YouTube. But I figured that anyone who has yet to make the leap might have something to gain from my experiences as an SMD noob. So here goes a three-part series. Maybe four, if you’re lucky.

First choose your board 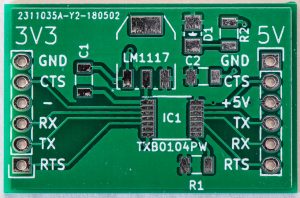 The board I’ve picked is of my own design. There’s nothing special about it: it just converts serial signals (TX, RX, RTS and CTS) between 5V and 3.3V levels. It’s part of the DottyMatrix project, but I’ll talk more about that some other time.

For our purposes here the salient point is that it has a variety of components – resistors, capacitors and an LED in 1206 packages, a 3.3V regulator in a SOT-223 package and a chip in a TSSOP-14 package with 0.3mm pins and 0.65mm pin pitch. That last one is a bugger.

Doing it by hand

We’ll start with hand-soldering. This is undoubtedly the cheapest, and often the quickest, way to solder SMD parts. But it’s not for the faint-hearted when the parts are very small. 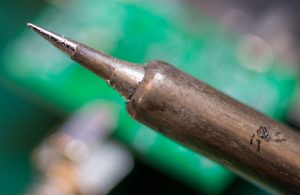 Not to put too fine a point on it…

Before we go any further, we need to talk about the soldering iron. Many people far more experienced than me insist you should use a chisel-shaped tip. It can still be a small tip, but the short, straight edge of the chisel-shaped tip provides more contact with the part and therefore transfers heat faster and more efficiently.

And I just can’t get it to work for me. I’ve tried several tips, but they all just end up getting in the way. For larger parts, wires etc, a chisel tip is great. But for SMD soldering I’ve only ever had success with a sharp, pointed tip. In fact, I’m thinking of adding a second soldering station or iron to my setup so that I can have two different tips easily available.

Now for the solder. Forget lead-free. Yes, it’s good for the environment and also better for you if you’re in the habit of sucking down solder fumes. (Pro tip: don’t.) But it’s much harder to work with and, when you’re SMD soldering, you’re already having a hard enough time. My favourite mix is 60% tin (Sn), 39% lead (Pb) and 1% copper (Cu) – or Sn60Pb39Cu1 as it says on the reel.

In keeping with the tinyness of everything SMD, you’ll want to use thin solder. These days I use 0.5mm for a lot of my soldering needs, including SMD, going up to 1mm for bigger components. Getting too much solder on an SMD pad is a problem – it’s much better to add a little bit at a time.

There are three more crucial things you need, and this applies to all SMD soldering techniques – flux, flux and flux. You can’t have too much flux. I dab some on, usually with a flux pen, before soldering anything. With small SMC IC packages, it becomes crucial if you want the solder to flow properly around those tiny legs.

Flux comes in all sorts of packages but I find the most useful to be the aforementioned pen and a syringe with a fine needle-like tip for getting flux into confined spaces.

While on the subject, I once bought an MG Chemicals flux pen. I’ve seen complaints online from people who say that, when you press down on the tip to make the flux flow, the pen dumps huge amounts of liquid on your board. I didn’t find that – mainly because, when the pen arrived, it was empty. All the flux was in the envelope. Avoid.

One leg at a time

With ICs, one technique I’ve seen suggested is to tin – ie, put small amounts of solder – on to two of the PCB pads, at diametrically opposite corners. You then place the chip on these solder blobs, melt them and the chip falls into place. 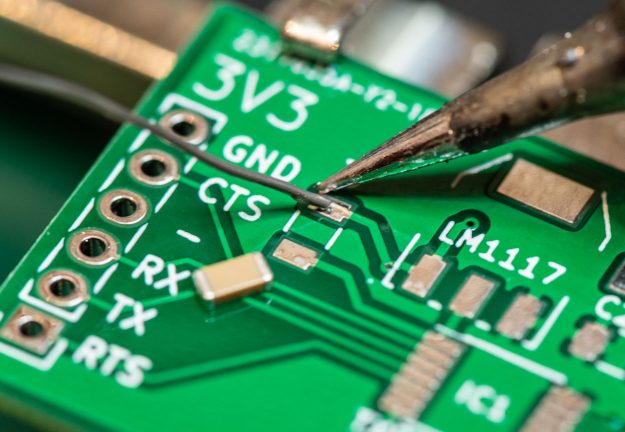 Adding a blob of solder to a pad. Note the thin solder.

That doesn’t work for me either. I find the chip tends to turn and slide off the solder blobs, ending up at an awkward angle. Instead, my technique for ICs is the same as for any component: put a small solder blob on just one pad. Place the component on the PCB as close to its final position as possible – essentially nudged up against the solder blob, but not on it. Use the soldering iron to melt the solder while using tweezers or a spudger to nudge the component into place, one leg or side moving into the molten solder. Sit back and let the solder harden. 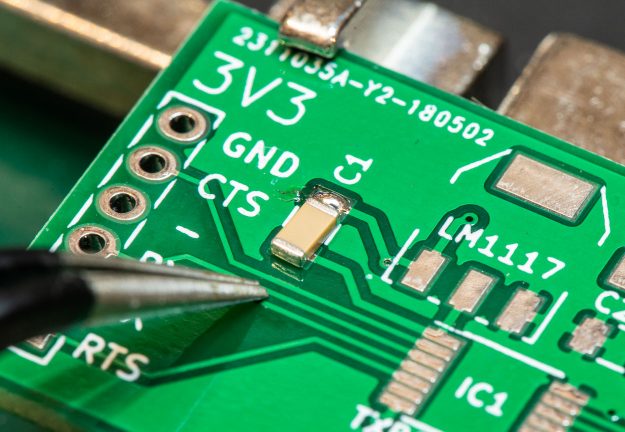 Nudging the part (in this case a capacitor) up against the solder blob.

The piece is now held down so that you can solder the other side or legs. 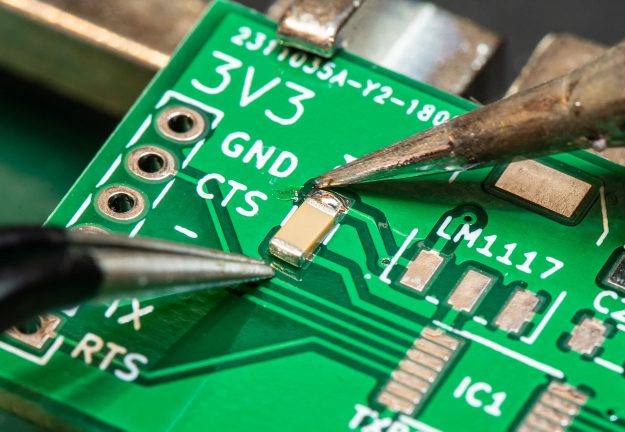 Still nudging while melting the solder.

The knack to this is to only nudge the piece slowly and gently into place – don’t try to force it into the solder or you’ll overshoot or send it spinning sideways.

There is another technique for ICs known as dragging. This involves putting rather a lot of solder on the tip of the iron – preferably using one of those quite large tips with a slight hollow – and then dragging the tip across the legs of the IC. Once you’ve got solder on all the legs, you fix any bridges by dragging outwards, perpendicular to the body of the chip. Not having the right kind of tip, I’ve never tried this. If it goes wrong, you’re probably not using enough flux.

Dave Jones at the EEVBlog has a handy video showing this technique.

Hand-soldering SMD parts takes patience and care. And your job is going to be so much harder if the PCB itself isn’t firmly fixed in place. One way of ensuring it doesn’t budge is to have a suitably sized mound of Blu Tack on your bench and stick the PCB to this. But that can leave residue on the board which may be a problem if you need to solder on both sides. 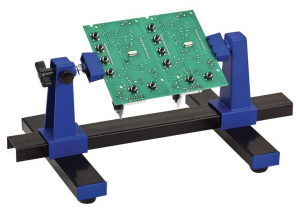 You can put the PCB into one of those ‘third hand’ devices, but I’ve never found those to be as stable as I’d like. My solution is to use an actual PCB holder. They’re not expensive and hold the board rigid while still allowing you to rotate it if you have some through-hole pieces to solder and need to get to the underside.

If you don’t need the revolving feature, and your boards are of relatively modest size, then there’s another way to go. 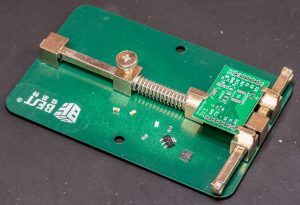 I found these small, metal board holders on AliExpress. They’re heavy enough to stop the PCB sliding away while you’re grappling with a particularly trick solder joint.

Finally, some kind of magnification is in order. I know many people use microscopes to see what they’re doing with these tiny components. I haven’t yet been able to justify the cost of one of these devices (and I suspect cheap USB-based microscopes are pretty worthless). Instead, I have one of those anglepoise-style ring lights with a built-in magnifier. It’s easy to position this between my head and the board and work with my nose pressed to the glass.

How easy is it?

So how viable is hand-soldering of SMD components? It depends – on the components and on you.

If you have the right kit (did I mention flux?) then it’s clearly possible. And I actually think it’s the best method for soldering just a handful of components, but with the following caveats.

Some SMD parts are very, very small. I have a sample book of 0805 resistors and I often take it out, gaze on the minuscule parts in amazement and then put it back. I can’t see me hand-soldering these resistors any time soon. With my arthritic hands, 1206 is as small as I can go; and even there, I sometimes find myself battling the tendency of the parts to ‘tombstone’ – stand up on one end as the part is sucked into the molten solder. It can be very frustrating.

I have some 1812 resistors, but parts are surprisingly hard to find in this format and can be significantly more expensive than, say, the 1206 equivalent.

Similarly, the tiny legs of, say, TSSOP IC packages can be challenging. Solder bridges are almost inevitable and while you can fix those with desoldering braid and/or a hot air rework gun, it can be slow work. I even managed to pull the leg off one chip. And all the time you’re messing about dealing with solder bridges you risk over-heating the chip. If I know I’m likely to be hand-soldering the chip (and even if I’m not) I’ll often prefer to get the chip in a SOP or SOIC package rather than SSOP/TSSOP – if available.

A lot depends on how patient you are and how slowly you’re prepared to work. I don’t have the steadiest of hands and delaying gratification is not my thing. That puts limits on what I’m prepared to do when it comes to hand-soldering SMD parts. Your mileage will almost certainly vary and the best thing you can do is try it.

If a PCB has a significant number of SMD parts, though – and for me that means more than four or five – then hand-soldering is going to be an exercise in tedium. So that’s why I invested in solder paste, compressed air and a hot air gun. But that’s for next time.