Here and there on the web I’ve noticed a bunch of people relating stories about their first experiences with computers, so I thought I’d join in.

The first programs I wrote were for what you might call a virtual machine – or an imaginary one. Always a sucker for gadgets, I put in an order for a Sinclair Spectrum as soon as the machine was announced. And if you know anything about the history of that machine – or of computing generally in the early 1980s – you’ll know what happened next. 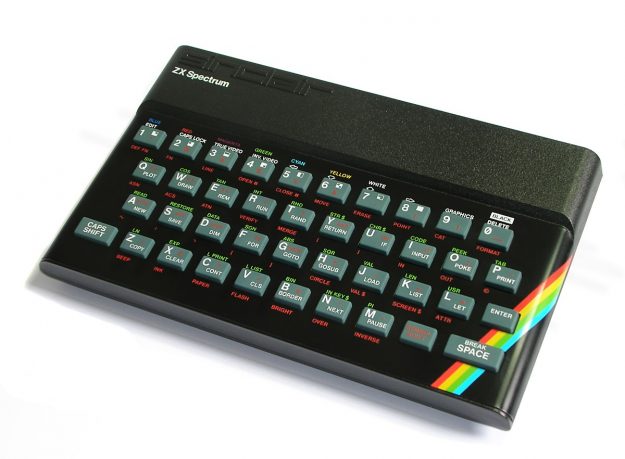 Clive Sinclair was the king of vapourware. Nothing was ever delivered on time, although he was happy to take your money. He certainly had mine.

It was frustrating as hell. There was no Internet then, no easy way to get updates on what was happening. All you could do was wait, hoping against expectation that the post would finally deliver you from your torment. 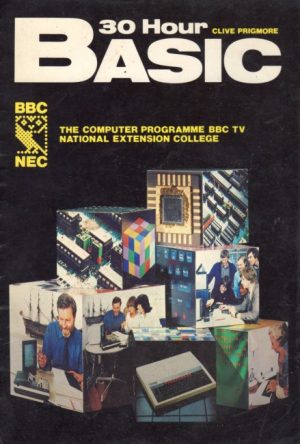 But hey, you could at least use the time constructively. For me, that meant learning Basic. I dragged myself down to Foyles, the London bookshop that was excruciating to navigate, had some of the rudest staff I ever encountered (and a few gems), but which offered the most comprehensive selection of books under one roof. I came out with a copy of ’30 Hour Basic’ published by the National Extension College.

I have a copy of this book today, bought not long ago in a fit of nostalgia. But it’s not the same version as the one I carried out of Foyles. The edition I have now is the BBC Micro version, and so is skewed to that machine’s Basic dialect. My original copy was more generic, probably based on some flavour of Microsoft Basic – I can’t remember exactly.

What I do remember is how computing just made sense to me. The book’s description of variables and memory locations as pigeon holes appealed to my sense of order, as did it’s use of flowcharts.

Fortunately, I had time on my hands to me absorb all of this, as I’d come down with a savage bout of pleurisy. So, no going to work for two weeks. Lucky me. 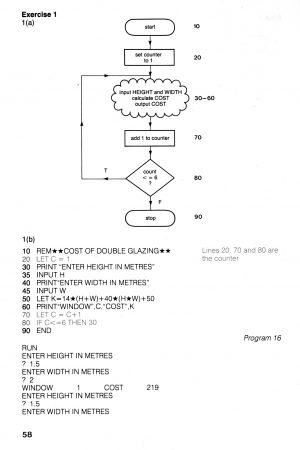 Before I’d got a quarter of the way through the book I was already writing programs. And rewriting them. And even debugging them – all without a computer. And I was amazed at their brilliance, at their economy and elegance. It was the only time I’ve ever written flowcharts for my programs – ever since I’ve tended to just jump right in with writing code.

By the time I was on the mend and ready to go back to work I had another stroke of luck. An acquaintance, who had been much earlier in the queue for Spectrums, actually got his machine. And he didn’t like it. In fact, even before getting the computer he’d decided he’d made a mistake and that a BBC Micro would be a much better choice (he was planning to use the computer to run his photo library, something he did very successfully). So, he asked, did I want to cancel my order and buy his Spectrum?

It was sitting on my desk the next day – a day in which I’d spent nearly all of my time on the phone to Sinclair cancelling my order (once they’d got your money they didn’t want to let go).

Getting used to the Spectrum’s dead-flesh keyboard and one-key keyword entry took a bit of time. Saving to and loading from cassette was tedious as well. But it didn’t take long before I’d typed in one of my highly refined and polished programs. I still recall the exquisite anticipation as I keyed in RUN and poised over the RETURN key. Finally I got up the nerve to press it and…

I can’t remember how long it took me to debug that simple program, but it felt like hours. It was my first lesson in the incompatibility of platforms that was to plague personal computers in the 1980s.

Not one of my lovingly honed programs worked first go. I think I gave up even trying to make some of them run. But I didn’t care; now I had access to an actual machine I quickly left behind those crude little ‘hello world’-level programs and was exploring a far more intricate programming world.

And, in fact, it wasn’t long before I started feeling the limitations of the Spectrum. I never did get to like that keyboard. And I’ve never been into games, which seemed to be the Spectrum’s raison d’être. Within a year I’d followed the lead of my friend and upgraded to a BBC Micro. But it was the Spectrum that got me hooked on the coding habit I’ve had ever since.