It seems strange that both the capacitors and the transformer – the chief suspects in the investigation as to why my Epson MX-80 F/T III dot matrix printer belched out smoke – tested fine with a multimeter.

As far as the capacitors were concerned, I measured resistance directly across their leads (having removed them from the circuit board) looking for a dead short. There was none; instead, the measured resistance just climbed quickly as the caps charged from the voltage being put out by the meter’s test leads.

I also used the capacitance mode of the meter, which reported that all three were providing their rated values. And I watched on the oscilloscope as the capacitors charged and discharged with a load attached.

Nothing seemed untoward – but there was one more test to do. An ESR check.

‘Effective series resistance’ is the resistance that a capacitor appears to have in an AC circuit. With an ideal capacitor, this should be zero – but nothing in the world is ideal. A relatively high ESR is a good indication of a failed or failing capacitor.

The easy way to test ESR is with an ESR meter, but I haven’t got one of those. What I do have is a brand, spanking new function generator (a Rigol DG1022Z, thanks for asking) and an oscilloscope. And, of course, access to YouTube where I found this very helpful video by W2AEW.

I suggest watching the video if you want to fully understand what’s involved here. But in brief: you output a square wave signal from the function generator and send this through the cap. With the oscilloscope in parallel with the cap, you check to see how the signal is modified by the presence of the capacitor.

Following the suggestions in the video, I set up a 2kHz square wave signal with 1V peak-to-peak. And I added a 500mV DC offset so that the lowest part of the cycle sat at 0V rather than -500mV. This would avoid reverse biasing the capacitor at any point in the cycle. The output looked like this. 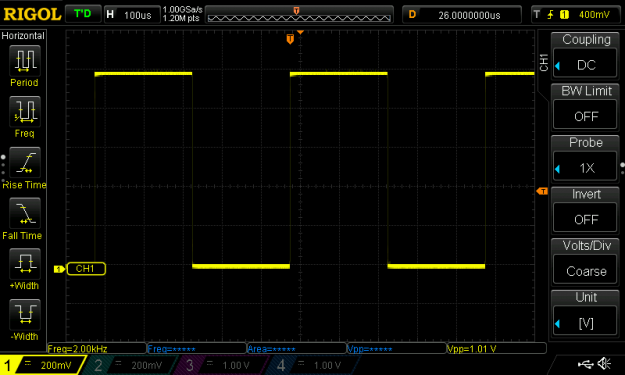 I attached the BNC lead from the function gen to a T-adapter that I plugged into the scope. To the other arm of the T-adapter I attached a simple BNC to dual minigrabber lead.

To give an idea of what an ‘ideal’ capacitor would look like, I just shorted out the minigrabbers. 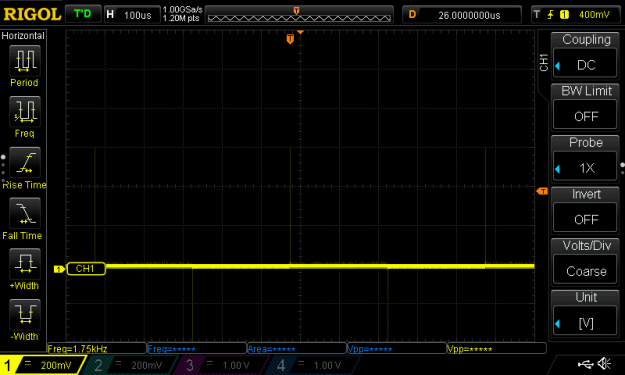 It’s near-as-dammit a flat line but with very thin spikes at the transitions. (It is, however, at the 0V position which, as we’ll see, isn’t quite the same as an ideal cap.) This simulates an ESR of 0Ω. With a real-life capacitor, the ESR is going to be a bit more which means we’re going to see a square wave indicating a voltage drop across the ‘effective’ resistor.

I attached the minigrabbers to a known-good 1,000µF capacitor and got this. 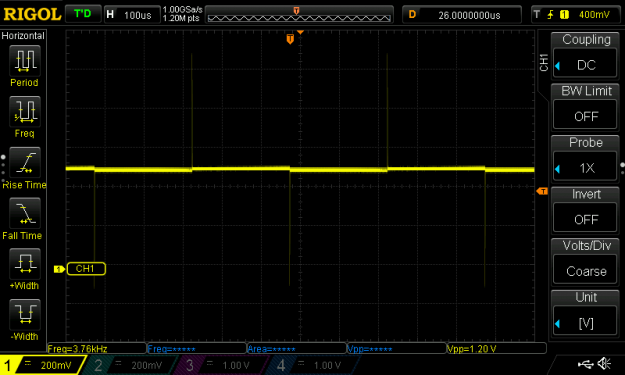 There’s a bit of wiggle, but not much. The scope’s on 200mV per division here and you can see that this line is basically at the half-way mark of 500mV – exactly what you’d expect of a good capacitor. Exactly how much apparent voltage drop you get depends on a number of factors. Other perfectly good capacitors will show greater amplitude oscillations than this. But as a rule of thumb, the greater the amplitude the worse the condition of the cap. 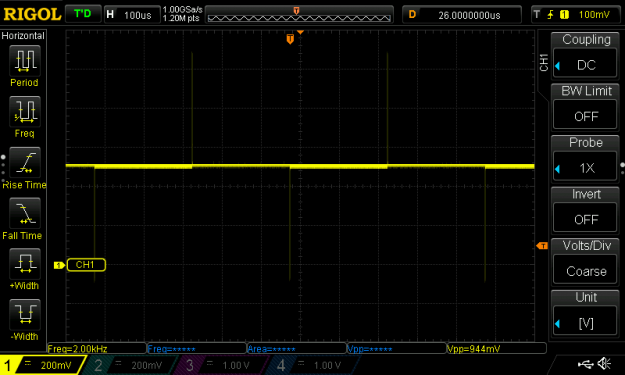 Not very different, is it? And to save your bandwidth I won’t bother uploading the images for the other two caps – they were virtually identical.

To get a better idea of what’s going on I cranked the vertical resolution to 5mV/div and set some cursors on the result to measure the peak-to-peak voltage. 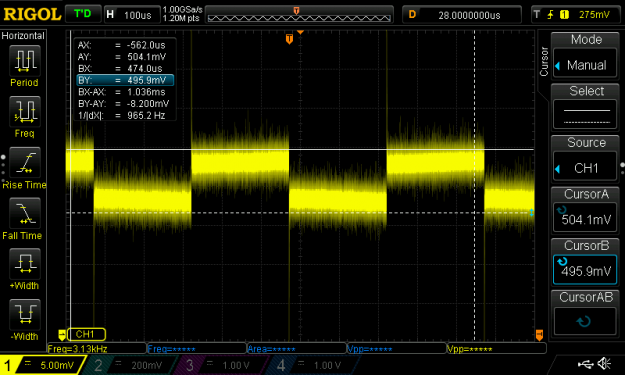 That’s just 8.2mV of amplitude. Actually it’s less because I should probably have put the cursors in the middle of those yellow bars, but what the hell. It’s still bugger all.

There’s a handy equation to work out the effective resistance:

My trusty Casio gives a result of … well, let’s call it 0.5Ω. It works out a little less than this but given my slight vagueness with the cursors let’s not quibble. This compares to the roughly 6.4Ω that W2AEW got with a bad capacitor in the video.

So there we have it. Ever though they’re more than 35 years old, these caps are perfectly good.

This means my suspicions now fall firmly back on the transformer. Yes, it’s putting out the specified voltages, but that’s with no load attached.

Given that I’m still waiting for the replacement caps to arrive, I’m tempted to solder these ones back in and fire up the printer to see what happens. What could go wrong?