Well, it’s happened. My first PCBs have arrived. Now it’s just a matter of summoning the courage to solder on the parts and see if it works. 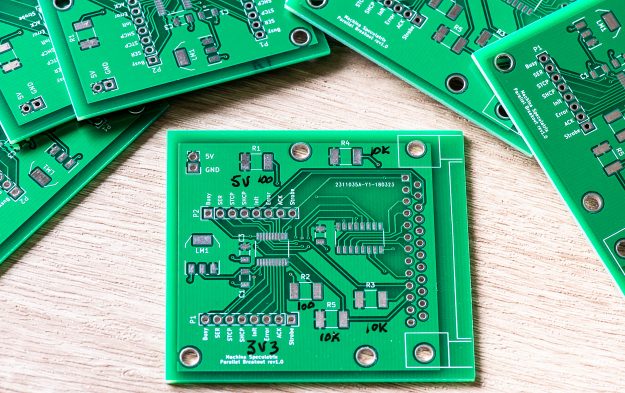 This is the board I designed as part of my Eagle vs KiCad series. It breaks out a Centronics-compatible DB25 socket, with the data lines being driven by a shift register. There’s a level-shifter on board so that there are two sets of header pins to connect to a computer or microcontroller – one for 5V and one for 3.3V.

I had the boards fabbed at JLCPCB. If you haunt YouTube electronics channels, as I do, you’ll have seen that name popping up a lot. The company is sponsoring a bunch of channels and is making a big push with an offer of 10 PCBs for $2.

That’s unquestionably a good deal, but not nearly as exciting as it first seems. The problem is that the firm is in China and shipping costs are painful. You can get normal surface shipping, as I did, which brought the cost to around $11, if memory serves. But then you have a wait of weeks rather than days. Opting for DHL instead will get you your boards sooner, but instead of being $2 the cost is more likely to be $22. As we’ll see, that wasn’t a cost I could justify.

Getting your first PCBs is an exciting moment. So let’s talk about my mistakes.

I haven’t yet made up one of these boards, so I don’t yet know if the circuit works. That’ll be a disappointment for another day.

The board has issues aside from (possibly) non-working circuitry.

The first thing I noticed is that the mounting holes for the DB25 connector seemed a bit too far back from the edge of the board. They are. The connector fits and will function fine, but it could have done with being 2mm further over. Lesson 1 learned. 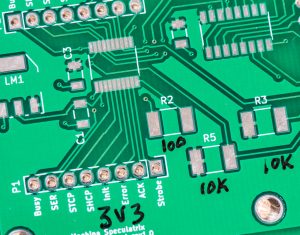 Then I noticed that I couldn’t tell which is the 5V connector and which the 3.3V. And the values of the resistors and capacitors were missing. And so were the names of the chips.

It turns out that much of this text is placed, by default, on the F.Fab layer in KiCad’s Pcbnew editor, rather than the F.SilkS (front silkscreen) layer. But, following guidance I’d found online, when I exported the Gerber files, I’d selected only F.Cu, B.Cu, F.SilkS, B.SilkS, F.Mask, B.Mask and Edge.Cuts. I’ve now written the crucial details on the board with permanent marker. Lesson 2 learned. 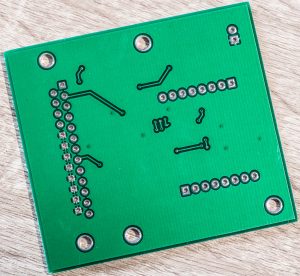 Not much happening here, is there?

I now feel that I could have made a few of the power tracks fatter. I could have done more with copper fills, at least on the front. Around the back, there’s not much going on at all, which makes me think I under-exploited that layer. Lessons 3–5 learned.

None of those errors are show-stopping. And, indeed, it doesn’t matter much if this board works or not. Its main purpose was to gain experience.

If (and it’s a big if) I can get my old Epson dot matrix printer working, then I may have a use for it. But in that case, I plan to develop a more sophisticated board with its own microcontroller – the DottyMatrix.

In the meantime, though, these 10 little boards will give me the means of practising my surface mount component soldering techniques – about which I’ll be posting in detail soon.