Things can get a little confusing with the 6502 microprocessor’s clocks. The datasheet details three clock pins which, for the current version of the chip are PHI2, PHI2O and PHI1O. And with older versions of the 6502 you’ll see PHI1 instead of PHI2.

As I detailed in a previous post, the situation is actually simpler that it first seems. It effect, the chip’s manufacturer, Western Digital, tells you to ignore PHI2O and PHI1O (the ‘phi’ being the symbol Φ standing for phase, by the way). Just connect an external oscillator to PHI2 and anything else in the computer that needs a clock circuit.

PHI2O, which outputs the clock signal, and PHI1O which outputs with the levels inverted (ie, 180 degrees out of phase) used to have purposes that, WD suggests, are now obsolete.

But that just made me curious. So I had to go and have a look at these signals on the oscilloscope (yup – any excuse to play with the scope).

I’m still building a breadboard-based kit: it’s not finished, but I’m at the stage where I can power it up and start probing. The kit uses a classic circuit for the clock, with a crystal, a capacitor, resistors and inverters, giving a clock frequency of 2MHz. I’ll be replacing that with a can-style oscillator.

First, I decided to compare the signal going in on PHI2 and the one coming out on PHI2O. 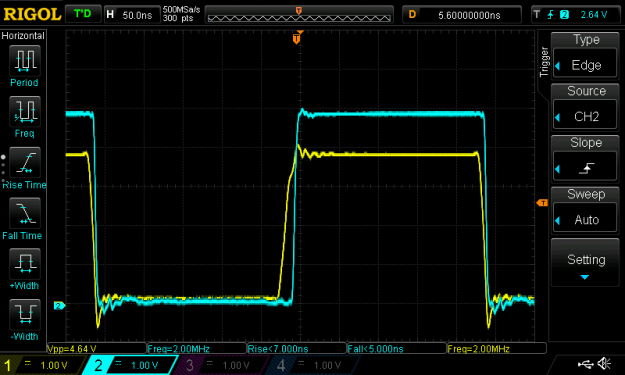 PHI2 is in yellow and PHI2O in blue. You’l immediately notice two things – the clock signal coming from the oscillator isn’t the full 5V, although that doesn’t really matter; and there’s a lag before PHI2O starts rising and falling. This is made up for, in part, by PHI2O’s rise and fall times being much shorter.

Presumably, the lag is the result of the propagation time – how long it takes the signal to make its way through the chip. Let’s look a little closer and take some measurements. 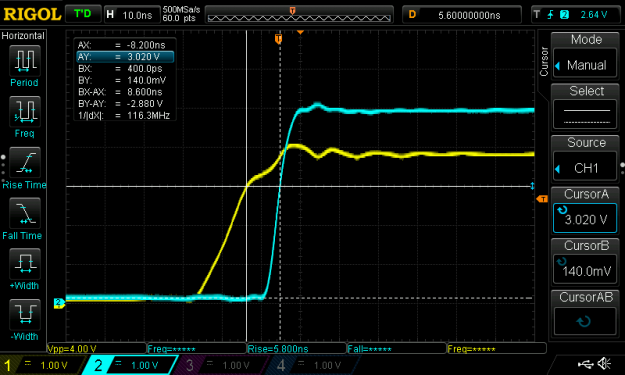 For entirely random reasons I decided to measure at the 3V level. Arguably, 2V would have been more useful. Also, I should have lined up the 0V levels a little more precisely. But anyhoo… at 3V there’s  lag of 8.6ns. In high-frequency circuits this might be an issue, I guess. In the Zolatron I can’t see it being a problem – but why take the risk? 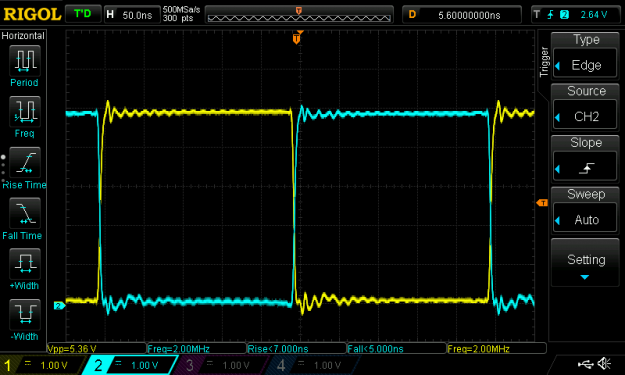 You can see how the PHI1O signal is inverted, with the rise of one signal starting pretty much at the same time as the fall of the other. Of course, both signals have the same propagation delay. And for completeness, let’s compare PHI2 (yellow) with PH1O. 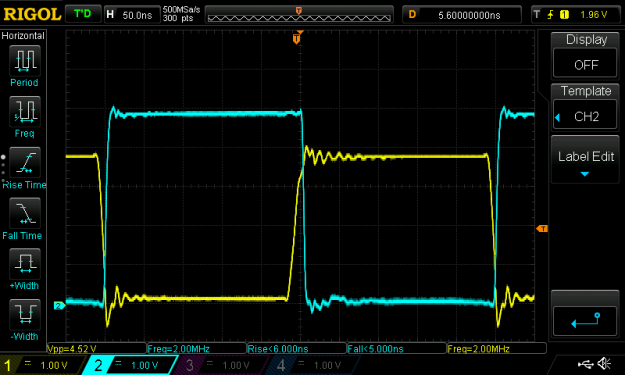 Unlike the previous comparison, the two traces don’t cross at the mid-way point (roughly 2.5V) – PHI2 has gone high before PHI1O has had a chance to fall very far.

Well, that’s my curiosity satisfied. I’ll stick with syncing everything to PHI2. It’s one less thing to worry about.