This is going to be a fairly short post because most of what I have to say can be summed up with: Eagle’s board layout program works very well and I had very few problems. It also offered very few features I wanted that KiCad didn’t.

To create a board that will sync with your schematic you need to do it from the schematic editor. Don’t just create a new board from Eagle’s main window.

The board opens with all the components off to the side, but not jumbled on top of each other, as with KiCad. So the first job is to drag them on to the board and place them roughly where you think they need to go. 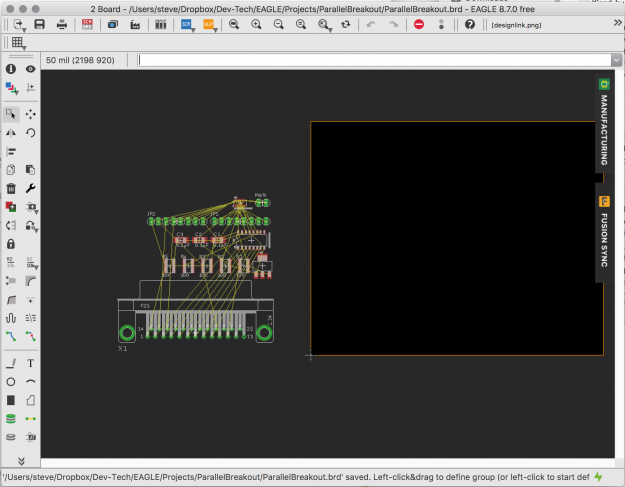 New board created with all the parts placed off to one side.

Now comes one of Eagle’s party tricks – autorouting. Click the autoroute button, accept the defaults, watch while Eagle does all the work, export your Gerbers, mail them to the fab house and go home. 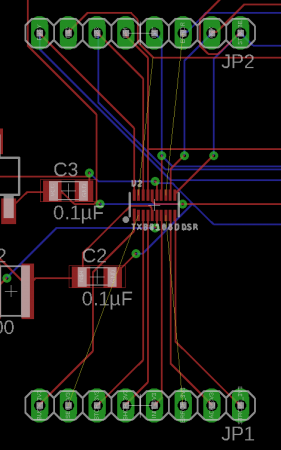 After autorouting – with remaining air wires.

The autorouting feature is very useful. It’s also configurable, so the more effort you put into its parameters the better a job it will do. But, other than for very simple circuits, it’s not a magic wand. I tried it with the parallel breakout board and the result was incomplete and some of its decisions seemed decidedly sub-par.

Just like KiCad, when parts are first placed on the board there are lines joining them to show where connections need to go. Eagle calls these ‘air wires’. After autorouting, my layout still had four air wires where Eagle couldn’t work out what it needed to do.

Still, autorouting will get you some of the way, even if you need to do some cleaning up afterwards. It could be a real time-saver.

It should also be noted that I did the autorouting before placing copper fills. That may have made a difference given that the existence of VCC and GND planes would have made some connections simpler and shorter.

One of the things that becomes very apparent when using Eagle’s board layout capabilities is that it seems a more functionally rich program compared to KiCad. There’s a lot of depth you can explore here, and a great deal of configuration you can do to suit your workflow, projects and the services you use. For example, the ability to create design rule files to match the needs of a specific fab house is very handy. Same goes for CAM rules for outputting Gerbers.

But let’s not lose track of the fact that I’m a beginner and this series is about people like me trying to choose the right EDA software. As much as I can appreciate Eagle’s capabilities, I’m not sure how many of them I’m going to use.

One example of this is layers. The default board graphic created by KiCad has 20 layers, including copper, silk screens, solder masks etc. You need seven of these layers to produce Gerber files (this is for simple boards, of course).

With Eagle, the default number of layers is 103. What do they all do? I have no idea. I assume they’re all needed for something, and that having access to all these layers gives you very fine control over your design. But I can’t imagine myself caring all that much.

I’ll be honest and admit I didn’t finish laying out the board in Eagle, much less sending it off for fabrication. That’s because, part way through, I can to two conclusions: