When your job involves many hours a day hammering at a keyboard then the nature of that humble instrument, so little regarded by occasional or amateur computer users, assumes great importance.

And if, like me, you are of considerable age and have worn-out hands, then the choice of keyboard becomes critical – otherwise it turns into an instrument of torture.

I’ve talked many times before about mechanical keyboards – and I’m going to do it again. Because now I’ve had time to live and work with these devices. And so I thought I’d run through my collection and share my experiences so far.

Every ‘mech keys’ enthusiast has his or her own definition of what constitutes a mechanical keyboard. I’m not going to get into semantics here. For our purposes we’ll define these keyboards by what they’re not: they’re not the cheap, clacky, rubber dome-based board that was shipped with that crappy Dell you bought in the 1990s and are somehow, inexplicably, still using; and they’re not those extremely flat, square-keyed chiclet keyboards fitted to nearly every laptop these days, and quite a few desktop machines. Mechanical keyboards have switches with a decent amount of travel and can usually be refitted with alternative keycaps.

(By the way, many of my boards do, indeed, have replacement keycap sets. Given I spend so many hours a day looking at these things I want them to be pretty, dammit.)

And the reason I got into all this is because of the osteoarthritis in my hands, which has also incited a return of carpal tunnel/RSI problems that I thought I’d licked. Hey ho.

Putting on the pressure

One of the critical things here is the amount of pressure required to activate a keypress (commonly specified as a weight in grammes) and also trying to avoid ‘bottoming out’ – ie, the key hitting the board at the end of its travel. That sends a small shock wave up the finger which, for me, is A Bad Thing.

There are lots of compromises to be made: a light activation force (say, 35g) means I can tap the keys quite lightly, which is good. But it also means that the key presents very little resistance to bottoming out. That’s not good. Stiffer keys make bottoming out less likely but guarantee that more force is needed on every keystroke, which is tiring.

The bottoming out problem can be ameliorated a tiny amount by adding O-rings. These are rubber rings that you mount on the keycaps. They cushion the blow a bit, but also effectively shorten the travel of the key, making bottoming out actually more likely.

See what I mean by compromises?

The first mechanical keyboard I ever bought was a full-size Das Keyboard 4 – the full-size Mac version. It was what convinced me that mechanical boards were the way to go. But it also persuaded me that full-size keyboards don’t suit my workstation. So I later invested in the ‘ten keyless’ (TKL) version. TKL boards include function keys, the cursor and navigation key clusters (page up and down, home, end, insert and delete) but do away with the numerical keypad. It’s the perfect compromise between compactness and functionality for me.

The TKL version – the Das Keyboard 4C Professional – is a great piece of kit. I have it fitted with brown switches. Das now seems to mostly use Cherry MX switches but at the time I bought my board it shipped with Greetech knock-offs.

I recently fitted new keycaps because the Das ones were dismal and hard to read. The current keycap set is the Matt3o /dev/tty MT3 set with the ‘Triumph’ mods. It’s highly sculpted and an acquired taste.

While I keep trying this board, a couple of things prevent me from making it my daily driver. First is that, in spite of being TKL, it’s still quite large, with lots of squandered space around the edges. And it doesn’t work perfectly with the Mac – to whit, a lack of media control meta keys. I could probably get around that using Keyboard Maestro, but as I rotate my boards frequently that could get messy. And the switches are okay, but not great.

There’s more about this keyboard here.

I bought this via Massdrop. There was a huge kerfuffle in the mech keys community over a spat between Input Club and Massdrop. I can’t remember the details and really don’t care. What interested me were the specs of this board.

First, it’s well-built, with an aluminium baseplate. Second, it’s programmable, using an online utility, which works adequately. It means I can ensure full Mac compatibility. But most interesting is the fact that you can change the switches. They pop right out using the supplied tool. Not only can you try different switches to see how you get on with them, you can even mix switches of different brands and weights. 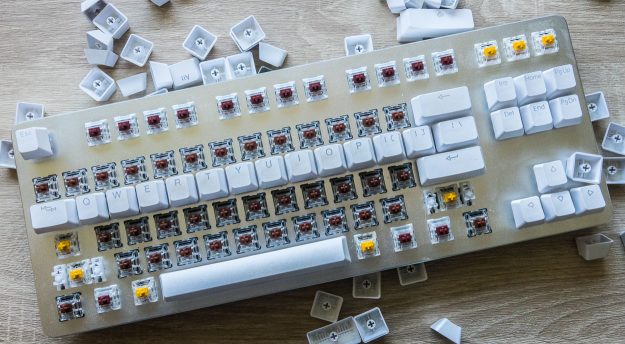 I decided to re-cap the K-Type. The eagle-eyed among you will notice this board now has three different types of switch.

I bought the board fitted with Kailh Kaihua Speed Copper switches. From the description these sounded perfect. They are said to have a lighter actuation force at the top of the travel, up to the activation point, followed by progressively heavier forces to prevent bottoming out. Theoretically, that’s my ideal switch. In practice, not so much. They just feel to me like Cherry MX browns but heavier. Too heavy, in fact. I couldn’t get on with this board with these keys.

I’m in the process of replacing the switches. In the picture above, I’ve left the Speed Coppers in place for the function keys. The main alpha keys I’ve replaced with Gateron browns that I happened to have knocking about. Meanwhile, many of the modifiers (the ones with yellow stems) are the rather clicky Kailh Kaihua Speed Gold. Again, these are slightly too heavy for use as the main keys, but for less-frequently used keys the difference in feel from the Gaterons provides interesting feedback.

A couple of other notes about this board. It doesn’t have fold-out feet, just a rather pretentious (read: Apple-like) magnetic bar on the bottom. I use my boards propped on a bit of wood, so this wasn’t a big deal for me but it makes the board less than ideal when used on a desk. And the supplied keycaps are terrible. At first encounter they feel high quality. But they have a texture that can best be described as ‘scratchy’ and which also gathers dirt, so the caps are already starting to look grubby.

I’m going to be giving this keyboard a serious trial to see if it can become my main board, now that it has the new switches.

I’ve had this Code keyboard, fitted with Cherry MX blue switches, for some time now. And I keep going back to it. In fact, it’s what I’m typing on now.

Mac compatibility isn’t an issue (there’s a switch for that). And it’s well built. It has white backlighting with several levels of intensity, if you care about that – I leave it switched off these days. In fact, I’ve replaced the standard shine-through black keycaps with something a little more eye-catching. This is the Jessica GMK Plum keyset. I’m slightly dubious about the purple keys, but the ivory-like main keys are beautiful.

There’s nothing especially clever or innovative about this board. It just works reliably.

Alongside the Code, this is my other go-to board at the moment. It’s fitted with Cherry MX brown switches, so I swap the boards whenever my arthritis tells me I need a different feel. 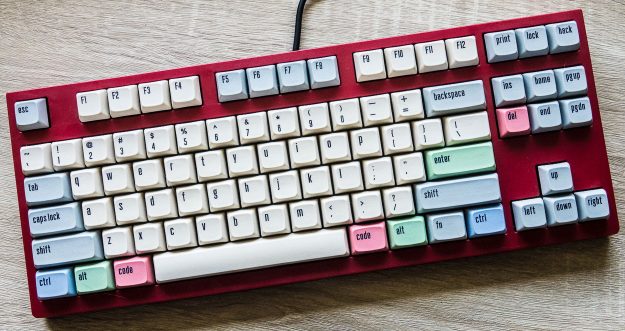 Like the Code, there’s nothing especially clever about this keyboard. It’s solid and it also has macOS compatibility via a switch. And again, I’ve re-capped it, this time with the MiTo Canvas XDA set with Bauhaus modifiers. I really don’t like black keys and this is much more pleasant to look at.

I’ll deal with the other boards briefly because, frankly, they’re not seeing much use and I’ve written about them elsewhere.

The Plum 87 is one that I had trouble getting hold of. When I did finally get myself a copy I rather fell for the ‘thwocky’ feel of the keys and the light touch (35g) they required. But I can’t persuade the damn thing to work properly with the Mac. If I can ever sort this problem I reckon I’d make a lot of use of this board. It’s silky smooth to the touch and very forgiving on my joints. 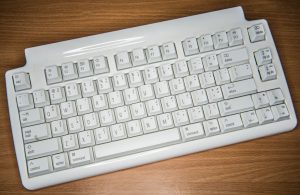 The Matias Mini Tactile Pro is a board I really want to like, not least because it was expensive. It’s built for the Mac and its key switches are based on the famous Alps using in the nigh-on historic Apple Extended Keyboard – a device I used to write a novel and which I adore (and still have).

But the truth is the feel is just too heavy. I’m going to keep trying for a while and if I can’t get used to it this board will be going on eBay. And I’ll be sad about that. 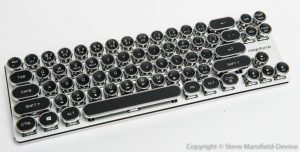 I bought the Magicforce 68-key board with typewriter-style keycaps because it looks good with my HMV1960 Raspberry Pi project. It’s good at looking good. It’s lousy for typing.

And finally, what is it about mech keys nerds and having as few keys on a keyboard as possible? There is a kind of one-upmanship that goes on that often morphs into a form of tech snobbery. People like to boast about their ortholinear, Planck keyboards, or the slightly less ridiculous Happy Hacker. On minimalist boards, many of the functions that normally are assigned to their own keys, such as function keys, number keys, punctuation and so on have to be accessed through additional ‘layers’ – that is, you have to press combinations of special function keys to do something as basic as type a number.

I have one 60% board, the KB Paradise V60, which is beautifully made – but it drives me nuts. Having to use a key combination to access the cursor keys stops me dead in my tracks. I’m sure you can get faster with practice – but having to practice in order to overcome a self-imposed disability seems idiotic. The V60 persuaded me that TKL, or perhaps 68 keys, is as small as I’ll go, thanks.